The oxidation of fatty acids is the chief source of energy in the catabolism of lipids; in fact, lipids that are sterols (steroids that have a hydroxyl group as part of their structure;) are not catabolized as a source of energy but are excreted. Both triacylglycerols, which are the main storage form of the chemical energy of lipids, and phosphoacylglycerols, which are important components of biological membranes, have fatty acids as part of their covalently bonded structures. In both types of compounds, the bond between the fatty acid and the rest of the molecule can be hydrolyzed (Figure 21.1), with the reaction catalyzed by suitable groups of enzymes—lipases, in the case of triacylglycerols, and phospholipases, in the case of phosphoacylglycerols. 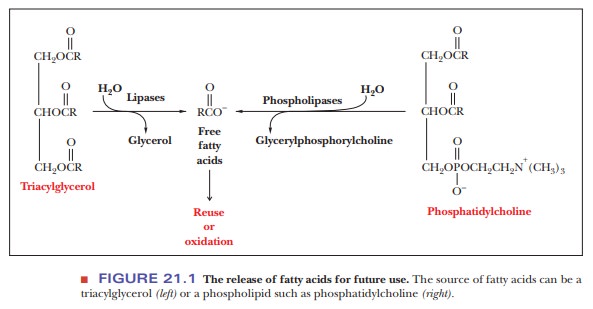 Several different phospholipases can be distinguished on the basis of the site at which they hydrolyze phospholipids (Figure 21.2). Phospholipase A2 is widely distributed in nature; it is also being actively studied by biochemists interested in its structure and mode of action, which involves hydrolysis of phospholipids at the surface of micelles. Phospholipase D occurs in spider venom and is responsible for the tissue damage that accompanies spider bites. Snake venoms also contain phospholipases; the concentration of phospholipases is particularly high in venoms with comparatively low concen-trations of the toxins (usually small peptides) that are characteristic of some kinds of venom. The lipid products of hydrolysis lyse red blood cells, prevent-ing clot formation. Snakebite victims bleed to death in this situation. 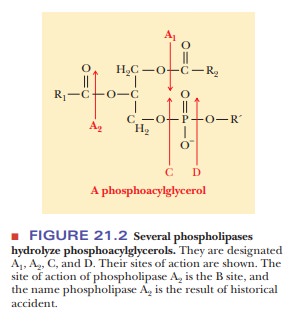 The release of fatty acids from triacylglycerols in adipocytes is controlled by hormones. In a scheme that will look familiar from our discussions of carbohy-drate metabolism, a hormone binds to a receptor on the plasma membrane of the adipocyte (Figure 21.3). This hormone binding activates adenylate cyclase, which leads to production of active protein kinase A (cAMP-dependent pro-tein kinase). 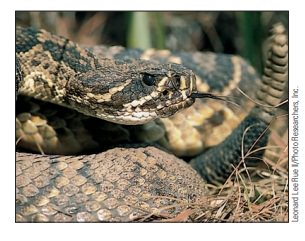 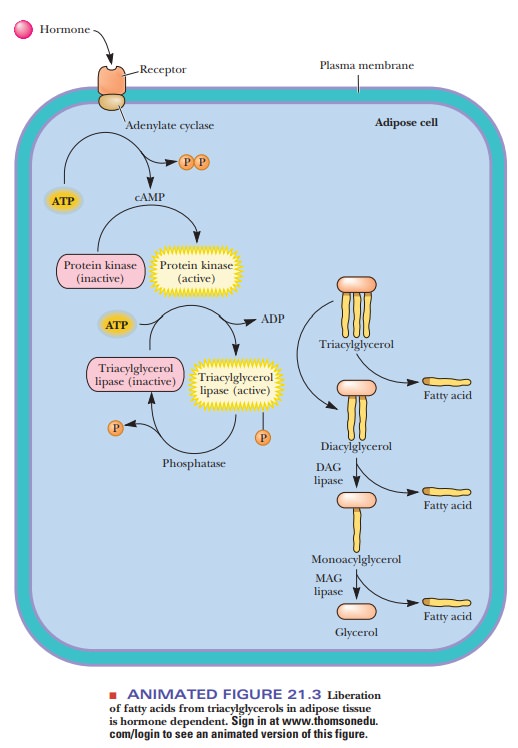 Protein kinase phosphorylates triacylglycerol lipase, which cleaves the fatty acids from the glycerol backbone. The main hormone that has this effect is epinephrine. Caffeine also mimics epinephrine in this regard, which is one reason competitive runners often drink caffeine the morning of a race. Distance runners want to burn fat more efficiently to spare their carbohydrate stores for the later stages of the race.

How are fatty acids transported to the mitochondrion for oxidation?

The enzyme that catalyzes formation of the ester bond, an acyl-CoA synthetase, requires ATP for its action. In the course of the reaction, an acyl adenylate intermediate is formed. The acyl group is then transferred to CoA-SH. ATP is converted to AMP and PPi, rather than to ADP and Pi. The PPi is hydrolyzed to two Pi; the hydrolysis of two high-energy phosphate bonds provides energy for the activation of the fatty acid and is equivalent to the use of two ATP. The formation of the acyl-CoA is endergonic without the energy provided by the hydrolysis of the two high-energy bonds. Note also that the hydrolysis of ATP to AMP and two Pi represents an increase in entropy (Figure 21.4). There are several enzymes of this type, some specific for longer-chain fatty acids and some for shorter-chain fatty acids. Both saturated and unsaturated fatty acids can serve as substrates for these enzymes. The esterification takes place in the cytosol, but the rest of the reactions of fatty-acid oxidation occur in the mito-chondrial matrix. The activated fatty acid must be transported into the mito-chondrion so that the rest of the oxidation process can proceed. 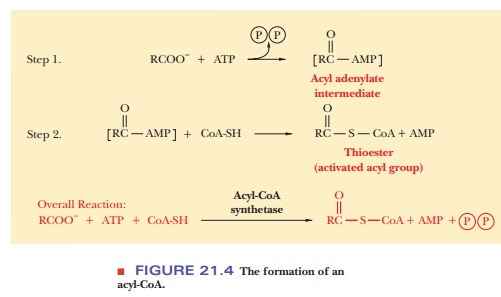 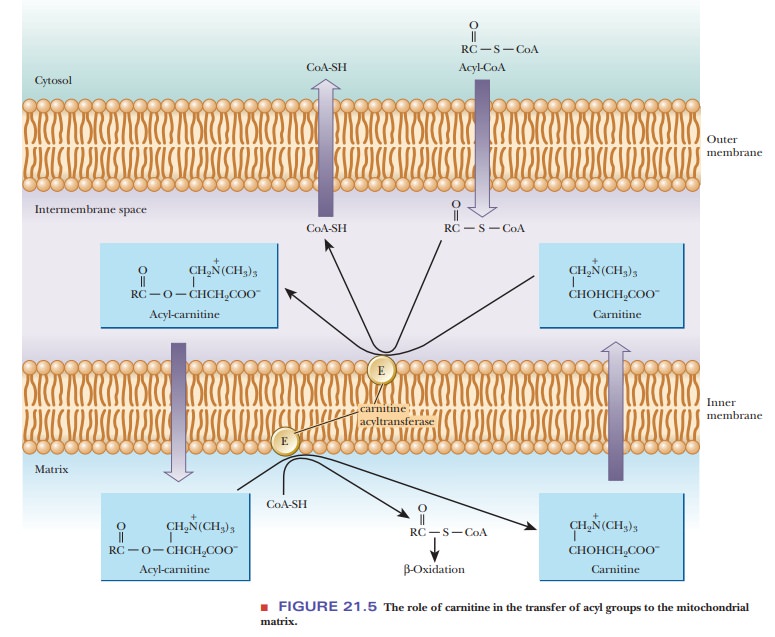 How does oxidation of fatty acids take place?

In the matrix, a repeated sequence of reactions successively cleaves two-carbon units from the fatty acid, starting from the carboxyl end. This process is called β-oxidation,since the oxidative cleavage takes place at the β-carbon of the acylgroup esterified to CoA. The β-carbon of the original fatty acid becomes the carboxyl carbon in the next stage of degradation. The whole cycle requires four reactions (Figure 21.6). 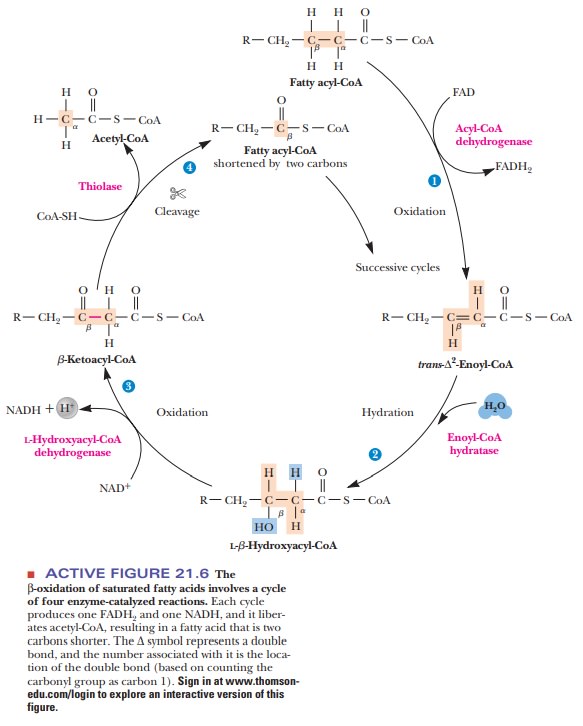 ·    The acyl-CoA is oxidized to an α, β unsaturated acyl-CoA (also called a β-enoyl-CoA). The product has the trans arrangement at the double bond. This reaction is catalyzed by an FAD-dependent acyl-CoA dehydrogenase.

·    The unsaturated acyl-CoA is hydrated to produce a β-hydroxyacyl-CoA. This reaction is catalyzed by the enzyme enoyl-CoA hydratase.

·    A second oxidation reaction is catalyzed by β-hydroxyacyl-CoA dehydroge-nase, an NAD+-dependent enzyme. The product is a β-ketoacyl-CoA.

·    The enzyme thiolase catalyzes the cleavage of the β-ketoacyl-CoA; a molecule of CoA is required for the reaction. The products are acetyl-CoA and an acyl-CoA that is two carbons shorter than the original molecule that entered the β-oxidation cycle. The CoA is needed in this reaction to form the new thioester bond in the smaller acyl-CoA molecule. This smaller molecule then undergoes another round of the β-oxidation cycle.

When a fatty acid with an even number of carbon atoms undergoes suc-cessive rounds of the β-oxidation cycle, the product is acetyl-CoA. (Fatty acids with even numbers of carbon atoms are the ones normally found in nature, so acetyl-CoA is the usual product of fatty-acid catabolism.) The number of mol-ecules of acetyl-CoA produced is equal to half the number of carbon atoms in the original fatty acid. For example, stearic acid contains 18 carbon atoms and gives rise to 9 molecules of acetyl-CoA. Note that the conversion of one 18-carbon stearic acid molecule to nine 2-carbon acetyl units requires eight, not nine, cycles of β-oxidation (Figure 21.7). The acetyl-CoA enters the citric acid cycle, with the rest of the oxidation of fatty acids to carbon dioxide and water taking place through the citric acid cycle and electron transport.

Fatty acids are activated and transported to the mitochondrial matrix for further catabolism.

The breakdown of fatty acids takes place in the mitochondrial matrix and proceeds by successive removal of two-carbon units as acetyl-CoA. Each cleavage of a two-carbon moiety requires a four-step reaction sequence called β-oxidation.