Atherosclerosis causes more deaths every year than cancer. It causes chest pain, heart attack, and stroke. For years it was described with simple models that described how the much-maligned LDL molecules would lay down plaques in blood vessels, leading to blockage. However, more recent evidence shows these old models to be overly simplistic. Lipid metabolism and LDL are certainly involved, but a more important villain in the process is inflammation.

The figure shows a more realistic and complicated picture of the formation of atherosclerosis. Excess LDL is involved in the process, but it is not caused by a simple laying down of the LDL. In step 1, the excess LDLs invade the tissue of the artery and become modified. The modified LDL molecules stimulate the production of adhesion molecules, shown as blue spikes sticking out into the blood stream. These adhesion molecules attract monocytes and T cells. The endothelial cells of the artery wall also secrete chemokines that attract the monocytes into the intima of the artery. In step 2, the monocytes mature into active macrophages and produce many inflammatory molecules. 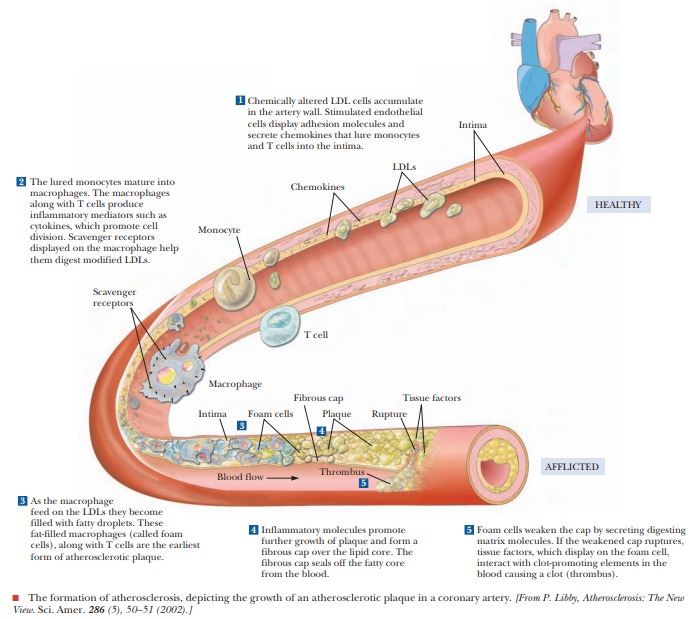 They also scavenge the modified LDLs. In step 3, the macrophages continue to digest the LDL and become filled with lipid droplets, becoming what are called foam cells. These cells form a fatty streak that is the first outward signal of atherosclerosis. In step 4, inflammation promotes growth of the plaque and formation of a fibrous cap over the lipids. The cap protrudes out into the blood-stream but also protects the blood from the deposits. In the final step, more inflammatory molecules can cause the cap to rupture. The foam cells also release tissue factor, a potent blood-clotting agent. The ruptured plaque leads to the formation of a thrombus, or blood clot in the artery. If the clot is big enough, it can cause a heart attack—the death of cardiac cells.

From a practical standpoint, the take-home message may still be the same. Practices that reduce LDL are still considered nec-essary for a healthy heart. However, when scientists try to come up with medical countermeasures, this full understanding of all the chemical factors involved in atherosclerosis is critical to the development of cures.