The ultimate precursor of all the carbon atoms in cholesterol and in the other steroids that are derived from cholesterol is the acetyl group of acetyl-CoA.

The ultimate precursor of all the carbon atoms in cholesterol and in the other steroids that are derived from cholesterol is the acetyl group of acetyl-CoA. There are many steps in the biosynthesis of steroids. The condensation of three acetyl groups produces mevalonate, which contains six carbons. Decarboxylation of mevalonate produces the five-carbon isoprene unit fre-quently encountered in the structure of lipids. The involvement of isopreneunits is a key point in the biosynthesis of steroids and of many other com-pounds that have the generic name terpenes. Vitamins A, E, and K come from reactions involving terpenes that humans cannot carry out. That is why we must consume these vitamins in our diets; vitamin D, the remaining lipid-soluble vitamin, is derived from cholesterol. Isoprene units are involved in the biosynthesis of ubiquinone (coenzyme Q) and of derivatives of proteins and tRNA with specific five-carbon units attached. Isoprene units are often added to proteins to act as anchors when the protein is attached to a membrane. 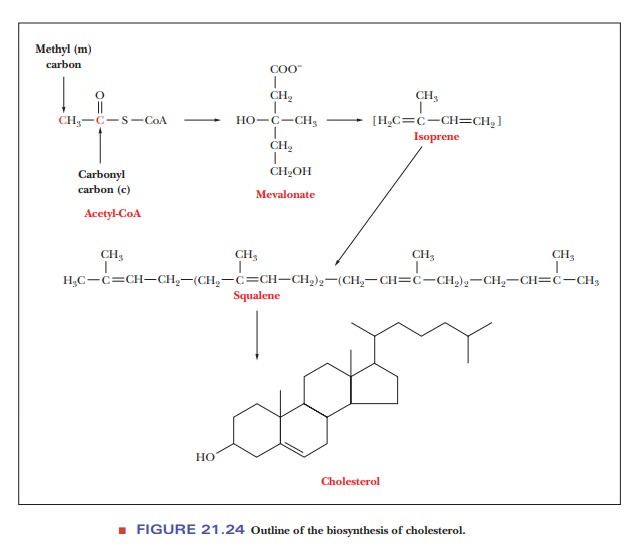 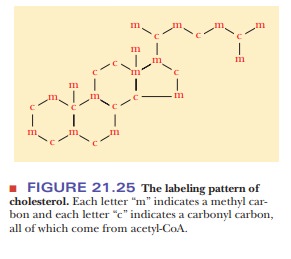 Why is HMG-CoA so important in cholesterol biosynthesis?

Condensation of isoprenoid units then leads to the production of squalene and, ultimately, cholesterol. Both of the isoprenoid derivatives we have met so far are required. Two further condensation reactions take place. As a result, farnesyl pyrophosphate, a 15-carbon compound, is produced. Two molecules offarnesyl pyrophosphate condense to form squalene, a 30-carbon compound. The reaction is catalyzed by squalene synthase, and NADPH is required for the reaction. 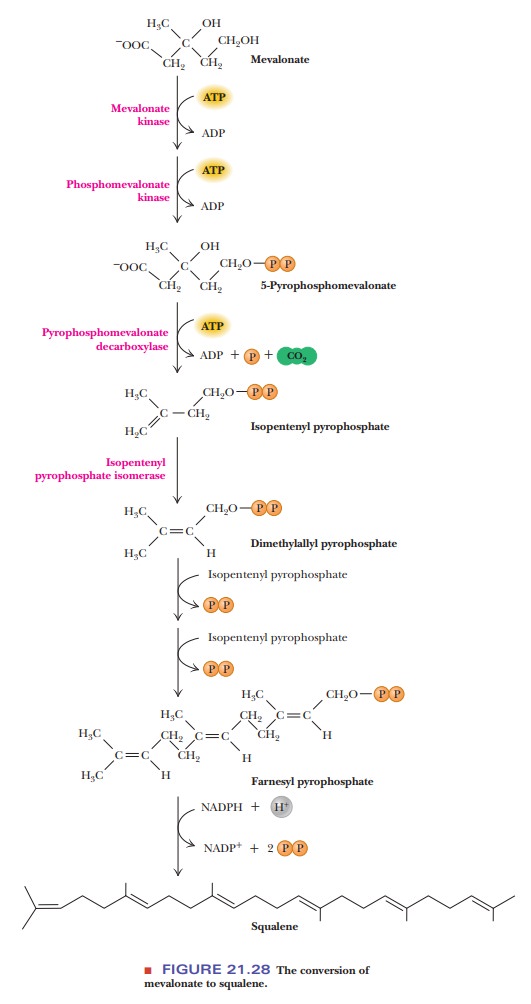 Figure 21.29 shows the conversion of squalene to cholesterol. The details of this conversion are far from simple. Squalene is converted to squalene epoxide in a reaction that requires both NADPH and molecular oxygen (O2). This reaction is catalyzed by squalene monooxygenase. Squalene epoxide then undergoes a complex cyclization reaction to form lanosterol. This remarkable reaction is catalyzed by squalene epoxide cyclase. The mechanism of the reac-tion is a concerted reaction—that is, one in which each part is essential for any other part to take place. No portion of a concerted reaction can be left out or changed because it all takes place simultaneously rather than in a sequence of steps. The conversion of lanosterol to cholesterol is a complex process. It is known that 20 steps are required to remove three methyl groups and to move a double bond, but we shall not discuss the details of the process. 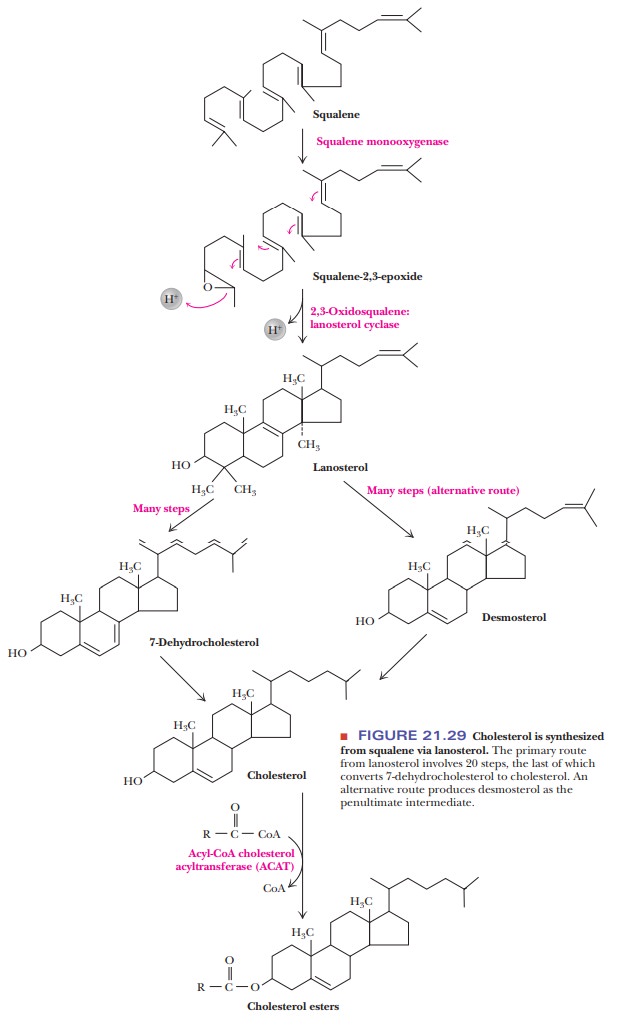 How does cholesterol serve as a precursor of other steroids?

After cholesterol is formed, it can be converted to other steroids of widely varying physiological function. The smooth ER is an important site for both the synthesis of cholesterol and its conversion to other steroids. Most of the cholesterol formed in the liver, which is the principal site of cholesterol synthesis in mammals, is converted to bile acids, such as cholate and glycocholate (Figure 21.30). These compounds aid in the digestion of lipid droplets by emulsifying them and rendering them more accessible to enzymatic attack. 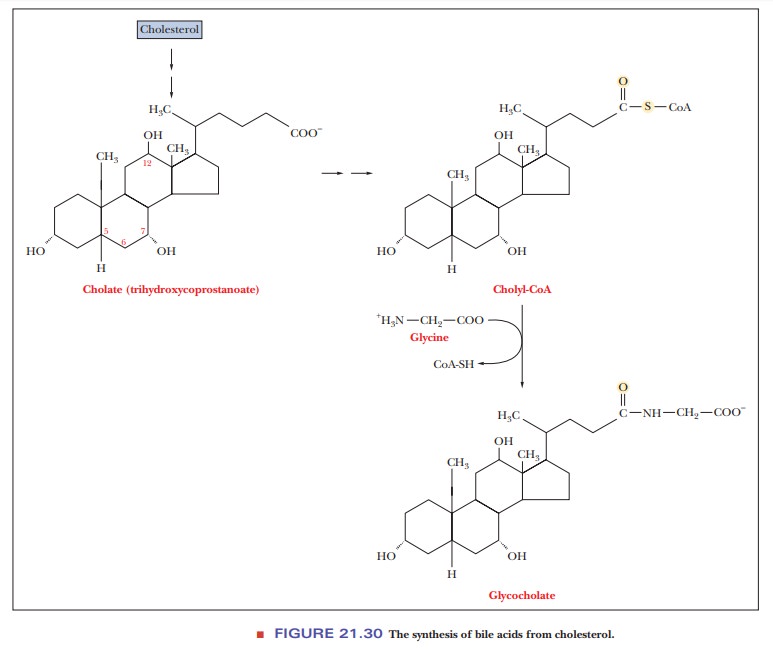 Cholesterol is the precursor of important steroid hormones (Figure 21.31), in addition to the bile acids. Like all hormones, whatever their chemical nature, steroid hormones serve as signals from outside a cell that regulate metabolic processes within a cell. Steroids are best known as sex hormones (they are components of birth-control pills), but they play other roles as well. Pregnenolone is formed from cholesterol, and progesterone is formed from pregnenolone. Progesterone is a sex hormone and is a precursor for other sex hormones, such as testosterone and estradiol (an estrogen). Other types of steroid hormones also arise from progesterone. Cortisone is an example of glucocorticoids, a group of hormones that play a role in carbohydrate metabo-lism, as the name implies, as well as in the metabolism of proteins and fatty acids. Mineralocorticoids constitute another class of hormones that are involved in the metabolism of electrolytes, including metal ions (“minerals”) and water. Aldosterone is an example of a mineralocorticoid. In cells in which cholesterol isconverted to steroid hormones, an enlarged smooth ER is frequently observed, providing a site for the process to take place. 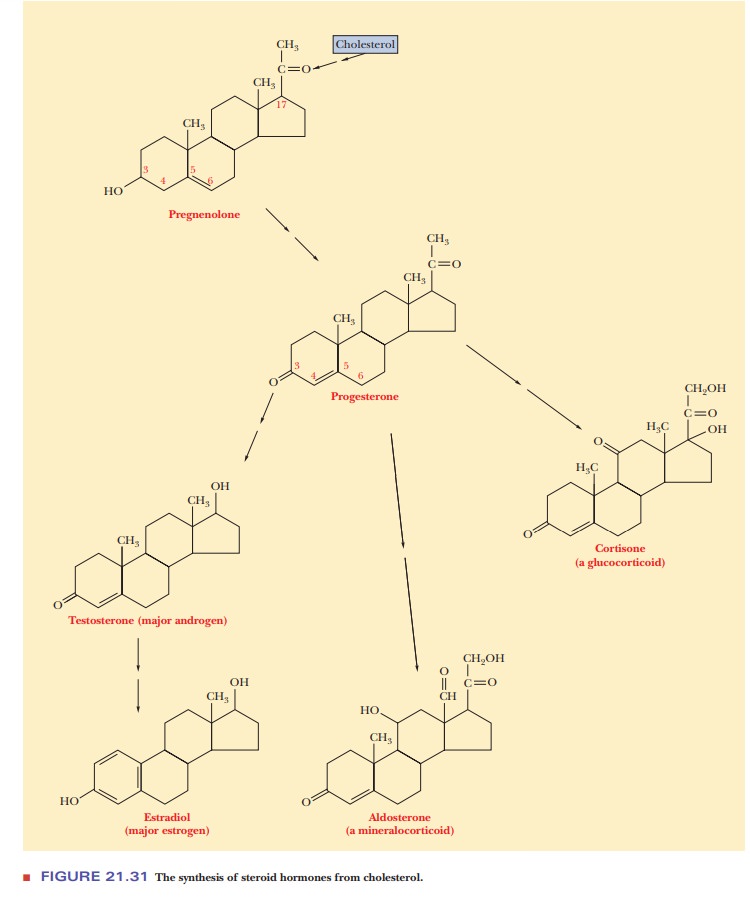 What is the role of cholesterol in heart disease?

Atherosclerosis is a condition in which arteries are blocked to a greater or lesser extent by the deposition of cholesterol plaques, which can lead to heart attacks. The process by which the clogging of arteries occurs is complex. Both diet and genetics are instrumental in the development of atherosclerosis. A diet high in cholesterol and fats, particularly saturated fats, will lead to a high level of cholesterol in the bloodstream. The body also makes its own cholesterol because this steroid is a necessary component of cell membranes. It is possible for more cholesterol to come from endogenous sources (synthesized within the body) than from the diet.

Figure 21.32 shows the architecture of an LDL particle. The interior consists of many molecules of cholesteryl esters (the hydroxyl group of the cholesterol is esterified to an unsaturated fatty acid, such as linoleate). On the surface, protein (apoprotein B-100), phospholipids, and unesterified cholesterol are in contact with the aqueous medium of the plasma. The protein portions of LDL particles bind to receptor sites on the surface of a typical cell. 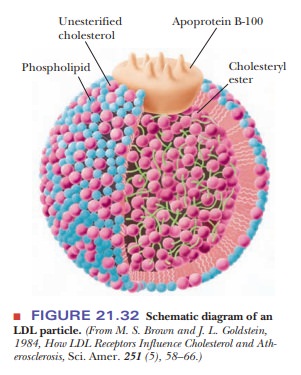 LDL particles are degraded in the cell. LDL particles are taken into the cell by the highly regulated process of endocytosis, in which a por-tion of the cell membrane containing the LDL particle and its receptor enters the cell. The receptor is returned to the cell surface, while the LDL particles are degraded in the lysosomes (organelles that contain degradative enzymes;). The protein portion of LDL is hydrolyzed to the compo-nent amino acids, while the cholesterol esters are hydrolyzed to cholesterol and fatty acids. Free cholesterol can then be used directly as a component of membranes; the fatty acids can have any of the catabolic or anabolic fates discussed earlier (Figure 21.33). Cholesterol not needed for membrane synthesis can be stored as oleate or palmitoleate esters in which the fatty acid is esterified to the hydroxyl group of cholesterol. The production of these esters is catalyzed by acyl-CoA:cholesterol acyltransferase (ACAT), and the presence of free cholesterol increases the enzymatic activity of ACAT. In addition, cholesterol inhibits both the synthesis and the activity of the enzyme hydroxymethylglutaryl-CoA reductase (HMG-CoA reductase). 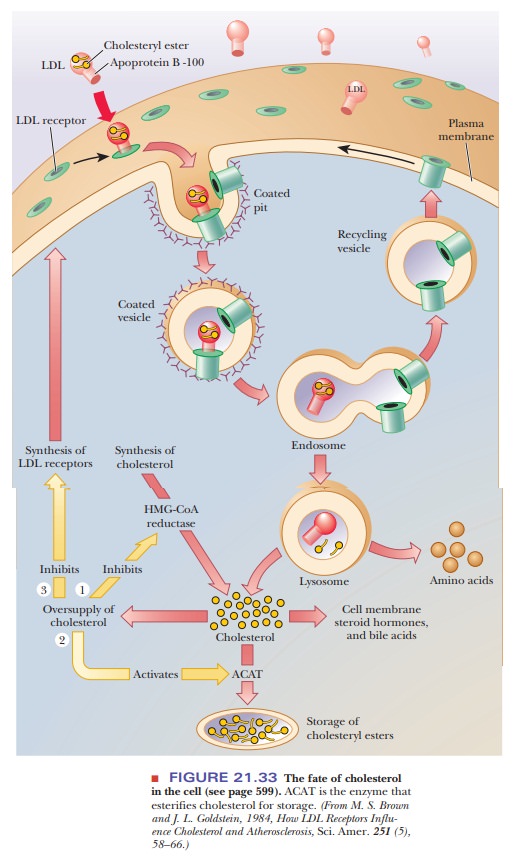 This enzyme catalyzes the production of mevalonate, the reaction that is the committed step in cholesterol biosynthesis. This point has important implications. Dietary cholesterol suppresses the synthesis of cholesterol by the body, especially in tissues other than the liver. A third effect of the presence of free cholesterol in the cell is inhibition of synthesis of LDL receptors. As a result of reduction in the number of receptors, cellular uptake of cholesterol is inhibited, and the level of LDL in the blood increases, leading to the deposition of atheroscle-rotic plaques.

The crucial role of LDL receptors in maintaining the level of cholesterol in the bloodstream is especially clear in the case of familial hypercholesterolemia, which results from a defect in the gene that codes for the active receptors. An individual who has one gene that codes for the active receptor and one defective gene is heterozygous for this trait. Heterozygotes have blood cholesterol levels that are above average; therefore, they are at higher risk for heart disease than the gen-eral population. An individual with two defective genes, and thus with no active LDL receptor, is homozygous for the trait. Homozygotes have very high blood cholesterol levels from birth, and there are recorded cases of heart attacks in two-year-olds with this condition. Patients who are homozygous for familial hypercholesterolemia usually die before age 20. Another genetic abnormality involved in hypercholesterolemia is the one that gives rise to a faulty apolipo-protein E, a component of IDL and VLDL, which is involved in the uptake of lipids by the cell. The unfortunate result is the same.

Before we leave this discussion, we should mention the “good” cholesterol, HDL. Unlike LDL, which transports cholesterol from the liver to the rest of the body, HDL transports it back to the liver for degradation to bile acids. It is desirable to have low levels of cholesterol and LDL in the bloodstream, but it is also desirable to have as high a proportion of total cholesterol as possible in the form of HDL. It is well known that high levels of LDL and low levels of HDL are correlated with the development of heart disease. Factors that are known to increase HDL levels, such as regular strenuous exercise, decrease the probability of heart disease. Smoking reduces the level of HDL and is highly correlated with heart disease.

The biosynthesis of cholesterol proceeds by the condensation of five-carbon isoprenoid units.

Isoprenoid units in turn are derived from the reaction of three acetyl-CoA units.

Once cholesterol is formed, it serves as the precursor for other steroids.

Cholesterol must be packaged for transport in the bloodstream. Some of these forms of cholesterol play a role in heart disease.