Synthesis of Acylglycerols and Compound Lipids

Synthesis of Acylglycerols and Compound Lipids

The biosynthesis of these two types of compounds takes place principally on the ER of liver cells or fat cells (adipocytes).

The glycerol portion of lipids is derived from glycerol-3-phosphate, a compound available from glycolysis. In liver and kidney, another source is glycerol released by degradation of acylglycerols. An acyl group of a fatty acid is transferred from an acyl-CoA. The products of this reaction are CoA-SH and a lysophosphatidate (a monoacylglycerol phosphate) (Figure 21.19). The acyl group is shown as esterified at carbon atom 2 (C-2) in this series of equations, but it is equally likely that it is esterified at C-1. 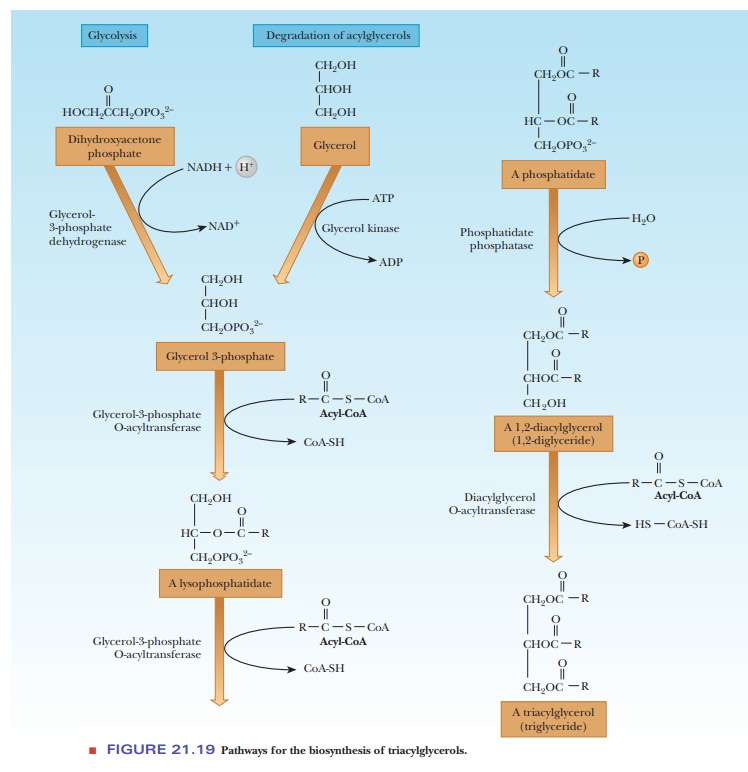 A second acylation reaction takes place, catalyzed by the same enzyme, producing a phosphatidate (a diacylglyceryl phosphate). Phosphatidates occur in membranes and are precursors of other phospholipids. The phosphate group of the phosphatidate is removed by hydrolysis, producing a diacylglycerol. A third acyl group is added in a reaction in which the source of the acyl group is an acyl-CoA rather than the free fatty acid.

How does the biosynthesis of phosphoacylglycerols take place?

Phosphoacylglycerols (phosphoglycerides) are based on phosphatidates, with the phosphate group esterified to another alcohol, frequently a nitrogen-containing alcohol such as ethanolamine. The conversion of phosphatidates to other phospholipids frequently requires the presence of nucleoside triphosphates, particularly cytidine triphosphate(CTP). The role of CTP depends on the type of organism, because the details of the biosynthetic pathway are not the same in mammals and bacteria. We shall use a comparison of the synthesis of phosphatidylethanolamine in mammals and in bacteria (Figure 21.20) as a case study of the kinds of reactions commonly encountered in phosphoglyceride biosynthesis. 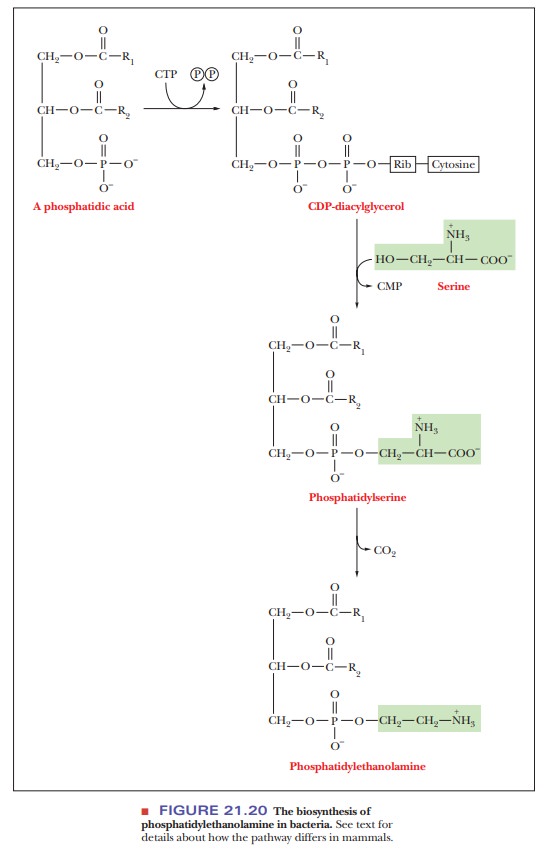 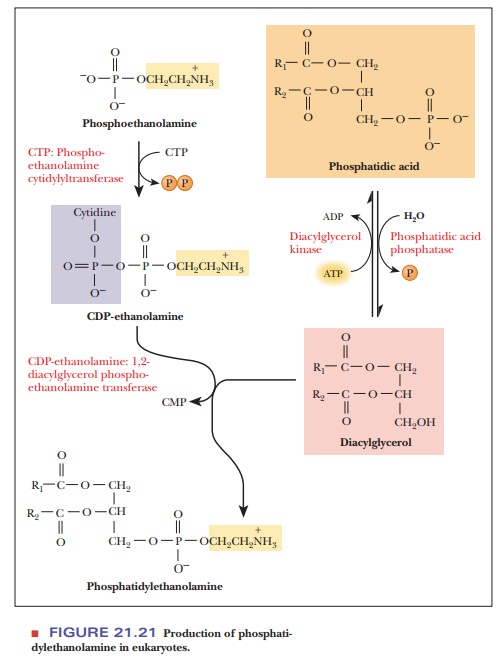 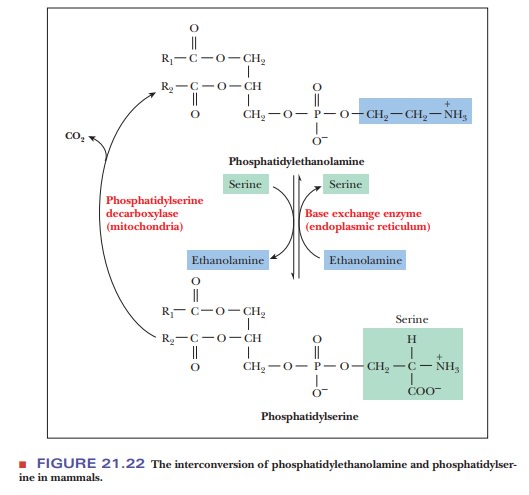 How does the biosynthesis of sphingolipids take place?

The structural basis of sphingolipids is not glycerol but sphingosine, a long-chain amine. The precursors of sphingosine are palmitoyl-CoA and the amino acid serine, which react to produce dihydrosphingosine.

The carboxyl group of the serine is lost as CO2 in the course of this reaction (Figure 21.23). An oxidation reaction introduces a double bond, with sphingosine as the resulting compound. Reaction of the amino group of sphingosine with another acyl-CoA to form an amide bond results in an N-acylsphingosine, also called a ceramide. Ceramides in turn are the parent compounds of sphingomyelins, cerebrosides, and gangliosides. Attachment of phosphorylcholine to the primary alcohol group of a ceramide produces a sphingomyelin, whereas attachment of sugars such as glucose at the same site produces cerebrosides. Gangliosides are formed from ceramides by attachment of oligosaccharides that contain a sialic acid residue, also at the primary alcohol group.

Fatty acids are linked to a backbone molecule, such as glycerol for triacyl-glycerols or phosphoacylglycerols, or sphingosine for sphingolipids. Other moieties are added to give rise to specific compounds.