The Energy Yield from the Oxidationof Fatty Acids

In carbohydrate metabolism, the energy released by oxidation reactions is used to drive the production of ATP, with most of the ATP produced in aerobic processes.

The Energy Yield from the Oxidationof Fatty Acids

In carbohydrate metabolism, the energy released by oxidation reactions is used to drive the production of ATP, with most of the ATP produced in aerobic processes. In the same aerobic processes—namely, the citric acid cycle and oxidative phosphorylation—the energy released by the oxidation of acetyl-CoA formed by β-oxidation of fatty acids can also be used to produce ATP. There are two sources of ATP to keep in mind when calculating the overall yield of ATP. The first source is the reoxidation of the NADH and FADH2 produced by the β-oxidation of the fatty acid to acetyl-CoA. The second source is ATP production from the processing of the acetyl-CoA through the citric acid cycle and oxidative phosphorylation. We shall use the oxidation of stearic acid, which contains 18 carbon atoms, as our example.

The activation step in which stearyl-CoA was formed is not included in this calculation, and we must subtract the ATP that was required for that step. Even though only one ATP was required, two high-energy phosphate bonds are lost because of the production of AMP and PPi. The pyrophosphate must be hydro-lyzed to phosphate (Pi) before it can be recycled in metabolic intermediates. As a result, we must subtract the equivalent of two ATP for the activation step. The net yield of ATP becomes 120 moles of ATP for each mole of stearic acid that is completely oxidized. See Table 21.1 for a balance sheet. Keep in mind that these values are theoretical consensus values that not all cells attain. 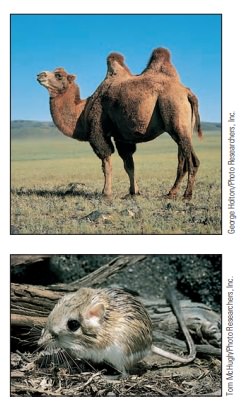 Another point of interest is that water is produced in the oxidation of fatty acids. We have already seen that water is also produced in the complete oxida-tion of carbohydrates. The production of metabolic water is a common feature of aerobic metabolism. This process can be a source of water for organisms that live in desert environments. Camels are a well-known example; the stored lipids in their humps are a source of both energy and water during long trips through the desert. Kangaroo rats provide an even more striking example of adaptation to an arid environment. These animals have been observed to live indefinitely without having to drink water. They live on a diet of seeds, which are rich in lipids but contain little water. The metabolic water that kangaroo rats produce is adequate for all their water needs. This metabolic response to arid conditions is usually accompanied by a reduced output of urine.

The complete oxidation of fatty acids by the citric acid cycle and the elec-tron transport chain releases large amounts of energy.

When we include the reoxidation of NADH and FADH2 from β-oxidation and the citric acid cycle, we obtain a net yield of 120 ATP for a single molecule of stearic acid.