Acetyl-CoA can be formed either by β-oxidation of fatty acids or by decarbox-ylation of pyruvate. Most of these reactions take place in the mitochondria, requiring a transport mechanism to export acetyl-CoA to the cytosol for fatty- acid biosynthesis.

How do the first steps of fatty-acid synthesis take place?

The citrate that is exported to the cytosol can undergo the reverse reaction, producing oxaloacetate and acetyl-CoA (Figure 21.12). Acetyl-CoA enters the pathway for fatty-acid biosynthesis, while oxaloacetate undergoes a series of reactions in which NADPH is substituted for NADH. This substitution controls the pathway because NADPH is required for fatty-acid anabolism. 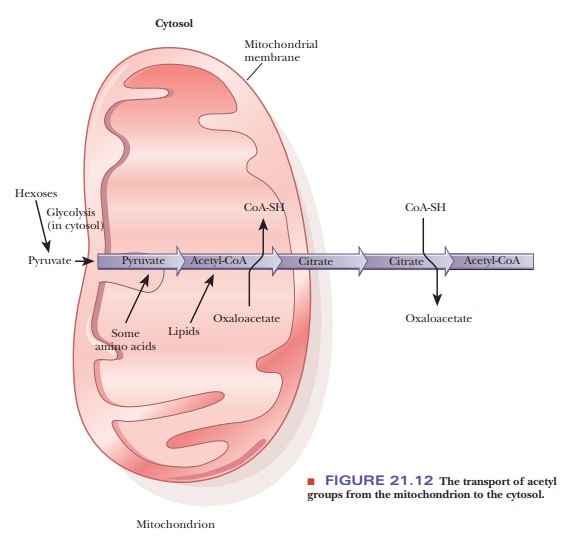 In the cytosol, acetyl-CoA is carboxylated, producing malonyl-CoA, a key intermediate in fatty-acid biosynthesis (Figure 21.13). This reaction is cata-lyzed by the acetyl-CoA carboxylase complex, which consists of three enzymes and requires Mn2+, biotin, and ATP for activity. We have already seen that enzymes catalyzing reactions that take place in several steps frequently consist of several separate protein molecules, and this enzyme follows that pattern. In this case, acetyl-CoA carboxylase consists of the three proteins biotin carboxylase, the biotincarrier protein, and carboxyl transferase. Biotin carboxylase catalyzes the transfer of the carboxyl group to biotin.

The “activated CO2” (the carboxyl group derived from the bicarbonate ion HCO3–) is covalently bound to biotin. Biotin (whether carboxylated or not) is bound to the biotin carrier protein by an amide linkage to the ε-amino group of a lysine side chain. The amide linkage to the side chain that bonds biotin to the carrier protein is long enough and flexible enough to move the carboxylated biotin into position to transfer the carboxyl group to acetyl-CoA in the reaction catalyzed by carboxyl transferase, producing malonyl-CoA (Figure 21.14). In addition to its role as a starting point in fatty-acid synthesis, malonyl-CoA strongly inhibits the carnitine acyl-transferase I on the outer face of the inner mitochondrial membrane. This avoids a futile cycle in which fatty acids are β-oxidized in the mitochondria to make acetyl-CoA just so they can be remade into fatty acids in the cytosol. 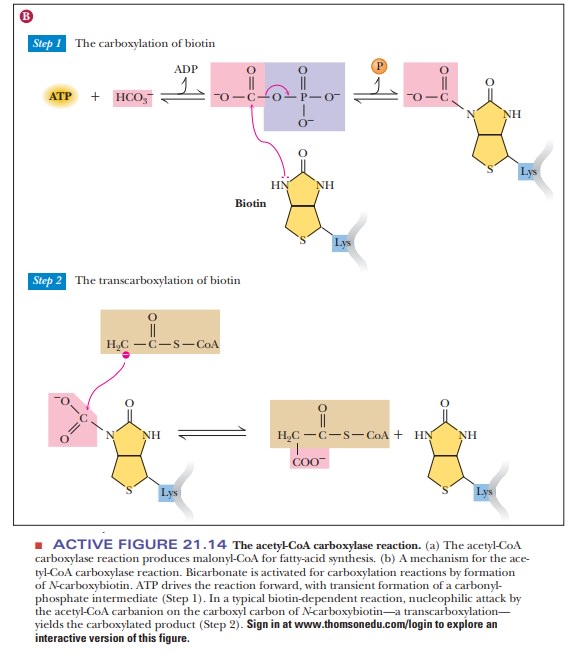 What is the mode of action of fatty-acid synthase?

The biosynthesis of fatty acids involves the successive addition of two-carbon units to the growing chain. Two of the three carbon atoms of the malonyl group of malonyl-CoA are added to the growing fatty-acid chain with each cycle of the biosynthetic reaction. This reaction, like the formation of the malonyl-CoA itself, requires a multienzyme complex located in the cytosol and not attached to any membrane. The complex, made up of the individual enzymes, is called fatty-acid synthase.

The usual product of fatty-acid anabolism is palmitate, the 16-carbon satu-rated fatty acid. All 16 carbons come from the acetyl group of acetyl-CoA; we have already seen how malonyl-CoA, the immediate precursor, arises from acetyl-CoA. But first there is a priming step in which one molecule of acetyl-CoA is required for each molecule of palmitate produced. In this priming step, the acetyl group from acetyl-CoA is transferred to an acyl carrier protein (ACP), which is considered a part of the fatty-acid synthase complex (Figure 21.15). The acetyl group is bound to the protein as a thioester. The group on the pro-tein to which the acetyl group is bonded is the 4-phosphopantetheine group, which in turn is bonded to a serine side chain; note in Figure 21.16 that this group is structurally similar to CoA-SH itself. The acetyl group is transferred from CoA-SH, to which it is bound by a thioester linkage, to the ACP; the ace-tyl group is bound to the ACP by a thioester linkage. Although the functional group of ACP is similar to that of CoA-SH, it is noteworthy that fatty-acid synthe-sis in the cytosol uses only ACP. In essence, the ACP is a label that marks acetyl groups for fatty-acid synthesis. 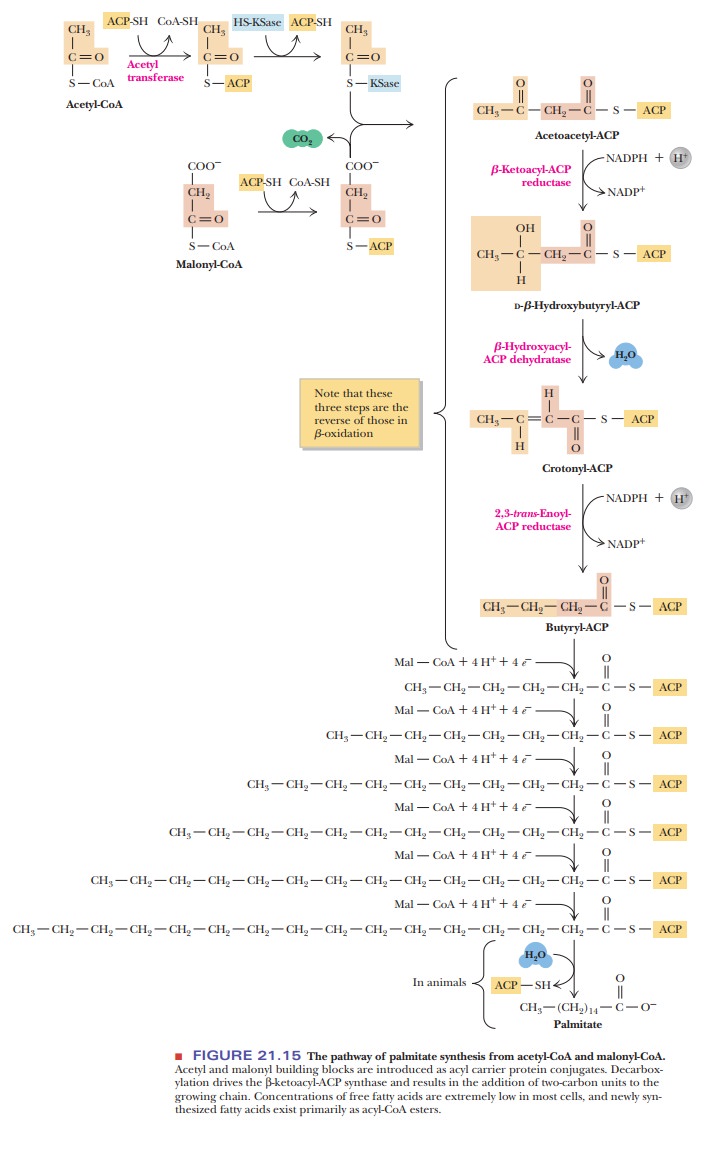 The acetyl group is transferred in turn from the ACP to another protein, to which it is bound by a thioester linkage to a cysteine-SH; the other protein is β-ketoacyl-S-ACP-synthase (HS-KSase) (Figure 21.15). The first of the successiveadditions of two of the three malonyl carbons to the fatty acid starts at this point. The malonyl group itself is transferred from a thioester linkage with CoA-SH to another thioester bond with ACP (Figure 21.15). The next step is a condensa-tion reaction that produces acetoacetyl-ACP (Figure 21.15). In other words, the principal product of this reaction is an acetoacetyl group bound to the ACP by a thioester linkage. Two of the four carbons of acetoacetate come from the priming acetyl group, and the other two come from the malonyl group. The carbon atoms that arise from the malonyl group are the one directly bonded to the sulfur and the one in the —CH2— group next to it. The CH3CO— group comes from the priming acetyl group. The other carbon of the malonyl group is released as CO2; the CO2 that is lost is the original CO2 that was used to carboxylate the acetyl-CoA to produce malonyl-CoA. The synthase is no longer involved in a thioester linkage. This is an example of a decarboxylation being used to drive an otherwise unfavorable condensation reaction.

Acetoacetyl-ACP is converted to butyryl-ACP by a series of reactions involving two reductions and a dehydration (Figure 21.15). In the first reduction, the β-keto group is reduced to an alcohol, giving rise toD-β-hydroxybutyryl-ACP.In the process, NADPH is oxidized to NADP+; the enzyme that catalyzes this reaction is β-ketoacyl-ACP reductase (Figure 21.15). The dehydration step, catalyzed by β-hydroxyacyl-ACP dehydratase, produces crotonyl-ACP (Figure 21.15). Note that the double bond is in the trans configuration. A second reduction reaction, catalyzed by β-enoyl-ACP reductase, produces butyryl-ACP (Figure 21.15). In this reaction, NADPH is the coenzyme, as it was in the first reduction reaction in this series.

In the second round of fatty-acid biosynthesis, butyryl-ACP plays the same role as acetyl-ACP in the first round. The butyryl group is transferred to the synthase, and a malonyl group is transferred to the ACP. Once again there is a condensation reaction with malonyl-ACP (Figure 21.15). In this second round, the condensation produces a six-carbon β-ketoacyl-ACP. The two added carbon atoms come from the malonyl group, as they did in the first round. The reduc-tion and dehydration reactions take place as before, giving rise to hexanoyl-ACP. The same series of reactions is repeated until palmitoyl-ACP is produced. In mammalian systems, the process stops at C16 because the fatty-acid synthase does not produce longer chains. Mammals produce longer-chain fatty acids by modifying the fatty acids formed by the synthase reaction.

Fatty-acid synthases from different types of organisms have markedly dif-ferent characteristics. In Escherichia coli, the multienzyme system consists of an aggregate of separate enzymes, including a separate ACP. The ACP is of pri-mary importance to the complex and is considered to occupy a central position in it. The phosphopantetheine group plays the role of a “swinging arm,” much like that of biotin, which was discussed earlier. This bacterial system has been extensively studied and has been considered a typical example of a fatty-acid synthase. In eukaryotes, however, fatty-acid synthesis occurs on a multienzyme complex. In yeast, this complex consists of two different types of subunits, called α and β, arranged in anα6β6 complex. In mammals, the fatty-acid synthase contains only one type of subunit, but the active enzyme is a dimer of this single subunit. It has been determined by X-ray crystallography that the mammalian synthase contains two reaction chambers in which the vari-ous components are held in proximity to each other as the reaction proceeds. Each of the subunits is a multifunctional enzyme that catalyzes reactions requiring several different proteins in the E. coli system. The structure of fungal fatty-acid synthase was recently elucidated in even greater detail by X-ray crystallography. The results demonstrated that the multiple active sites for the synthase reac-tions are arranged in the reaction chamber so that a circular movement of the ACP-bound substrates can deliver the substrate to each specific active site (Figure 21.17). The growing fatty-acid chain swings back and forth between enzyme activities contained on different subunits, using ACP as a “swinging arm.” Like the bacterial system, the eukaryotic system keeps all the components of the reaction in proximity to one another, which shows us another example of the advantages to multienzyme complexes. For more information about the structure of eukaryotic synthases. 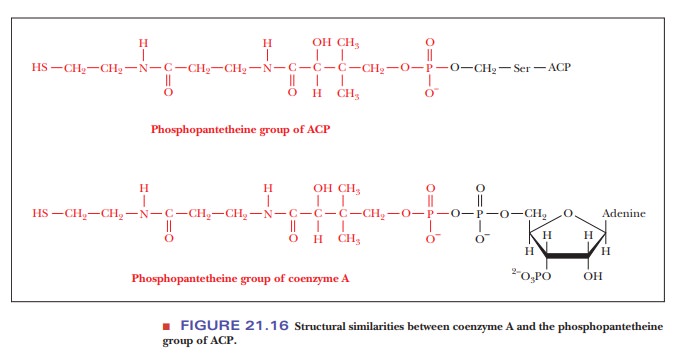 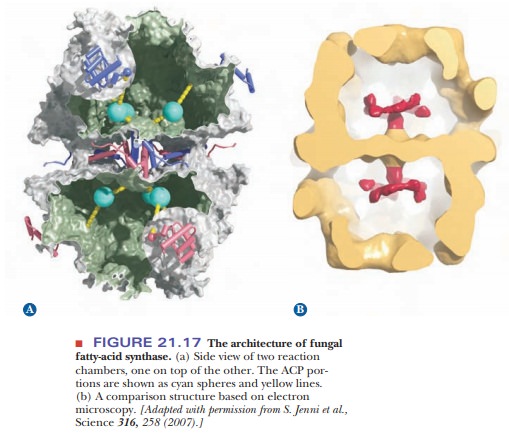 Several additional reactions are required for the elongation of fatty-acid chains and the introduction of double bonds. When mammals produce fatty acids with longer chains than that of palmitate, the reaction does not involve cytosolic fatty-acid synthase. There are two sites for the chain-lengthening reactions: the endoplasmic reticulum (ER) and the mitochondrion. In the chain-lengthening reactions in the mitochondrion, the intermediates are of the acyl-CoA type rather than the acyl-ACP type. In other words, the chain-lengthening reactions in the mitochondrion are the reverse of the catabolic reactions of fatty acids, with acetyl-CoA as the source of added carbon atoms; this is a difference between the main pathway of fatty-acid biosynthesis and these modification reactions. In the ER, the source of additional carbon atoms is malonyl-CoA. The modification reactions in the ER also differ from the bio-synthesis of palmitate in that, like the mitochondrial reaction, no intermediates are bound to ACP.

Reactions in which a double bond is introduced in fatty acids mainly take place on the ER. The insertion of the double bond is catalyzed by a mixed-function oxidase that requires molecular oxygen (O2) and NAD(P)H. During the reaction, both NAD(P)H and the fatty acid are oxidized, while oxygen is reduced to water. Reactions linked to molecular oxygen are comparatively rare. Mammals cannot introduce a double bond beyond carbon atom 9 (counting from the carboxyl end) of the fatty-acid chain. As a result, linoleate [CH3—(CH2)4—CH=CH—CH2—CH=CH—(CH2)7—COO–], with two double bonds, and linolenate [CH3—(CH2)4—CH=CH—CH2CH=CH— CH2—CH=CH—(CH2)4COO–], with three double bonds, must be included in the diets of mammals. They are essential fatty acids because they are precursors of other lipids, including prostaglandins. 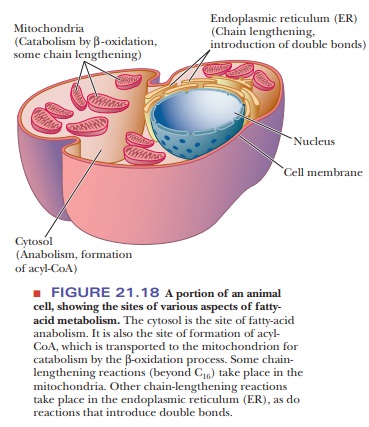 Even though both the anabolism and the catabolism of fatty acids require successive reactions of two-carbon units, the two pathways are not the exact reversal of each other. The differences between the two pathways are summa-rized in Table 21.2. The sites in the cell in which various anabolic and catabolic reactions take place are shown in Figure 21.18.

Acetyl-CoA is transported to the cytosol and converted to malonyl-CoA. Chain lengthening takes place in the cytosol as well.

The biosynthesis of fatty acids proceeds by the addition of two-carbon units to the hydrocarbon chain. The process is catalyzed in many organ-isms by a large multienzyme complex called fatty-acid synthase.