It is often necessary to maintain a certain pH of a solution in laboratory and industrial processess. This is achieved with the help of buffer solutions, buffer systems or simply buffers.

It is often necessary to maintain a certain pH of a solution in laboratory and industrial processess. This is achieved with the help of buffer solutions, buffer systems or simply buffers.

A buffer solution is one which maintains its pH fairly constant even upon the addition of small amounts of acid or base.

Buffer action : Let us illustrate buffer action by taking example of a common buffer system consisting of a solution of acetic acid and sodium acetate (CH3COOH/CH3COONa).

since the salt is completely ionised, it provides the common ions CH3COO- in excess. The common ion effect suppresses the ionisation of acetic acid. This reduces the concentration of H+ ions which means that pH of the solution is raised.

It is stated that a buffer solution containing equimolar amounts (0.10 M) of acetic acid and sodium acetate has pH 4.74. Now we proceed to discuss how the addition of a small amount of HCl or NaOH to the buffer solution affects its pH.

The pH of the buffer is governed by the equilibrium

The buffer solution has a large excess of CH3COO- ions produced by complete ionisation of sodium acetate,

1. Addition of HCl. Upon the addition of HCl, the decrease of H+ ions is counteracted by association with the excess of acetate ions to form unionised CH3COOH. Thus the added H+ ions are neutralised and the pH of the buffer solution remains unchanged. However owing to the increased concentration of CH3COOH, the equilibrium (1) shifts slightly to the right to increase H+ ions.

This explains the marginal increase of pH of the buffer solution on addition of HCl.

Henderson equation : The pH of an acid buffer can be calculated from the dissociation constant, Ka, of the weak acid and the concentrations of the acid and the salt used.

The dissociation expression of the weak acid, HA, may be represented As

where [acid] is the initial concentration of the added acid and [salt] that of the salt used.

Taking negative logs of both sides of the equation (2), we have

This relationship is called the Henderson-Hasselbalch equation or simply Henderson equation.

In a similar way, the Henderson-Hasselbalch equation for a basic buffer can be derived. This can be stated as :

Significance of the Henderson-Hasselbalch equation. With its help

1. The pH of a buffer solution can be calculated from the initial concentrations of the weak acid and the salt provided Ka is given.

However, the Henderson-Hasselbalch equation for a basic buffer will give pOH and its pH can be calculated as (14 - pOH).

2. The dissociation constant of a weak acid (or weak base) can be determined by measuring the pH of a buffer solution containing equimolar concentrations of the acid (or base) and the salt.

The measured pH, therefore, gives the value of pKa of the weak acid.

Likewise we can find the pKb of a weak base by determining the pOH of equimolar basic buffer.

3. A buffer solution of desired pH can be prepared by adjusting the concentrations of the salt and the acid added for the buffer.

It is noteworthy that buffer solutions are most effective when the concentrations of the weak acid (or weak base) and the salt are about equal. This means that pH is close to the value of pKa of the acid (or pKb of the base). 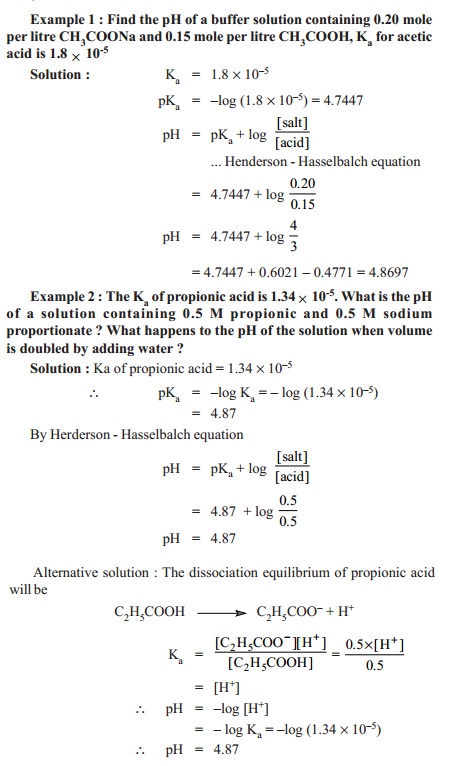