Transition Networks: A transition network is a finite state automaton that is used to represent a part of a grammar.

A transition network is a finite state automaton that is used to represent a part of a grammar.

If this word matches one of those arcs, the network moves into the state to which that arc points. Hence, the first network shown in Fig 10.2, when presented with a Noun Phrase, will move from state S1 to state S2.

If a phrase is presented to a transition network and no match is found from the current state, then that network cannot be used and another network must be tried. Hence, when starting with the phrase the cat sat on the mat, none of the networks shown in Fig 10.2 will be used because they all have only nonterminal symbols, whereas all the symbols in the cat sat on the mat are terminal.Hence, we need further networks, such as the ones shown in Figure 10.2, which deal with terminal symbols. 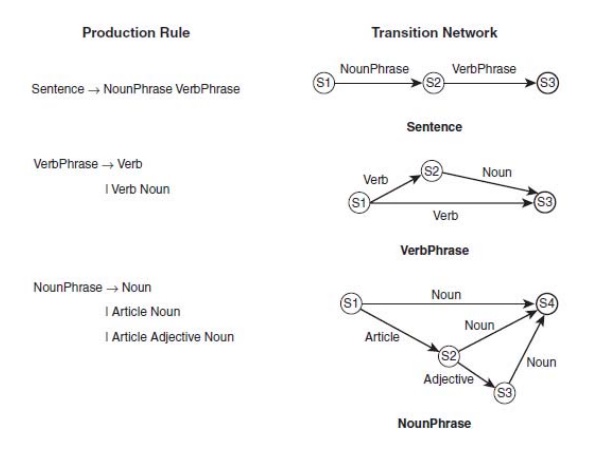 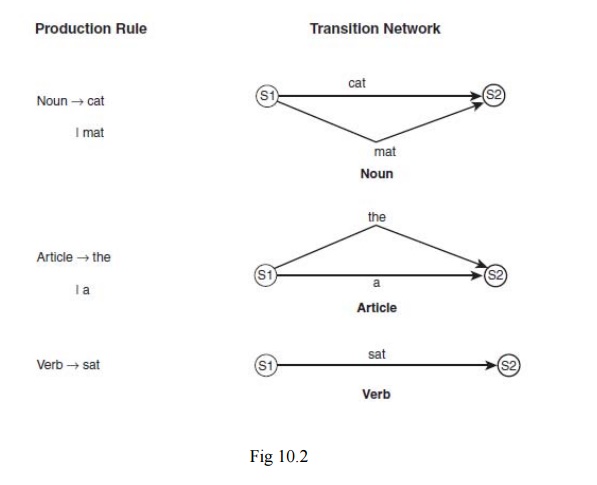 Transition networks can be used to determine whether a sentence is grammatically correct, at least according to the rules of the grammar the networks represent.

Let us examine the parse of the following simple sentence:

We begin in state S1 in the Sentence transition network. To proceed, we must follow the arc that is labeled NounPhrase. We thus move out of the Sentence network and into the NounPhrase network.

This arc is labeled Article, so we move on to the Article transition network. Here, on examining the second label, we find that the first word is matched by the terminal symbol on this arc.

As before, we move into the Noun network and find that our next word, cat, matches. We thus move to state S4 in the NounPhrase network. This is a success node, and so we move back to the Sentence network and repeat the process for the VerbPhrase arc.

It is possible for a system to use transition networks to generate a derivation tree for a sentence, so that as well as determining whether the sentence is grammatically valid, it parses it fully to obtain further information by semantic analysis from the sentence.

identifies an article and a noun, these are similarly added to the tree.

In this way, the full parse tree for the sentence can be generated using transition networks. Parsing using transition networks is simple to understand, but is not necessarily as efficient or as effective as we might hope for. In particular, it does not pay any attention to potential ambiguities or the need for words to agree with each other in case, gender, or number.