The primary and secondary windings of a two winding transformer have induced emf in them due to a common mutual flux and hence are in phase. 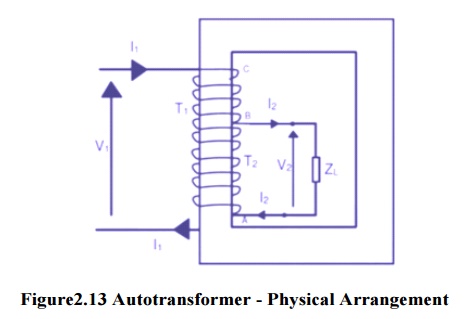 The primary and secondary windings of a two winding transformer have induced emf in them due to a common mutual flux and hence are in phase. The currents drawn by these two windings are out of phase by 180◦. This prompted the use of a part of the primary as secondary. This is equivalent to fusing the secondary turns into primary turns. The fused section need to have a cross sectional area of the conductor to carry (I2−I1) ampere! This ingenious thought led to the invention of an auto transformer. Fig. 28 shows the physical arrangement of an auto transformer. Total number of turns between A and C are T1. At point B a connection is taken. Section AB has T2 turns. As the volts per turn, which is proportional to the flux in the machine, is the same for the whole winding,

For simplifying analysis, the magnetizing current of the transformer is neglected. When the secondary winding delivers a load current of I2 ampere the demagnetizing ampere turns is I2T2 . This will be countered by a current I1 flowing from the source through the T1 turns such that,

A current of I1 ampere flows through the winding between B and C . The current in the winding between A and B is (I2 − I1) ampere. The cross section of the wire to be selected for AB is proportional to this current assuming a constant current density for the whole winding. Thus some amount of material saving can be achieved compared to a two winding transformer. The magnetic circuit is assumed to be identical and hence there is no saving in the same. To quantify the saving the total quantity of copper used in an auto transformer is expressed as a fraction of that used in a two winding transformer as,

This means that an auto transformer requires the use of lesser quantity of copper given by the ratio of turns. This ratio therefore denotes the savings in copper. As the space for the second winding need not be there, the window space can be less for an auto transformer, giving some saving in the lamination weight also. The larger the ratio of the voltages, smaller is the savings. As T2 approaches T1 the savings become significant. Thus auto transformers become ideal choice for close ratio transformations. The savings in material is obtained, however, at a price. The electrical isolation between primary and secondary