Resistance and Reactance of Transformer

Expression for the leakage reactance of a core type transformer with concentric LV and HV coils of equal height or length:

RESISTANCE AND REACTANCE OF TRANSFORMER

[Note: 1. Useful flux: It is the flux that links with both primary and secondary windings and is responsible in transferring the energy Electro-magnetically from primary to secondary side. The path of the useful flux is in the magnetic core.

2. Leakage flux: It is the flux that links only with the primary or secondary winding and is responsible in imparting inductance to the windings. The path of the leakage flux depends on the geometrical configuration of the coils and the neighboring iron masses.

a = area over which the flux is established

l = length of the flux path

If x p and xs are the leakage reactances of the primary and secondary windings, then the total leakage  reactance of the transformer referred to primary winding Xp = xp + xs = xp + xs(Tp/Ts)2

Expression for the leakage reactance of a core type transformer with concentric LV and HV coils of equal height or length:

Assumptions considered for the derivation:

a. Effect of magnetizing current is neglected.

b. Reluctance and effect of saturation of iron is neglected.

c. All the mmf is assumed to be used to over come the reluctance of coil height

d. Leakage flux distribution in coil and in the space between the LV and HV coils is assumed to be parallel to the leg axis.

bp and bs = Radial depth of primary and secondary windings

Lmt = Mean length of primary and secondary windings considered together

a. Leakage flux inside the primary or secondary winding and

b. Leakage flux in between the LV and HV coils

Considering the mean length of the strip is approximately equal to Lmt P .

Therefore, the total flux linkage due to the flux inside the coil 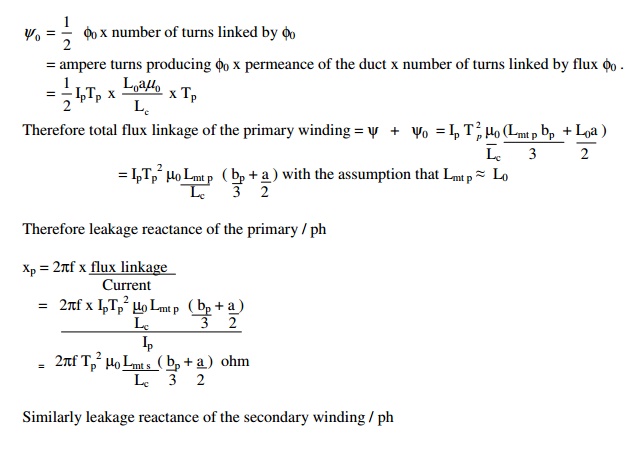