-  it is difficult to characterise accurately

-  it is constantly changing

-   The knowledge captures generalisations; situations that share properties, are grouped together, rather than being allowed separate representation.

-  It can be understood by people who must provide it; although for many programs the bulk of the data may come automatically, such as from readings. In many AI domains people must supply the knowledge to programs in a form the people understand and in a form that is acceptable to the program.

-  It can be easily modified to correct errors and reflect changes in real conditions.

-  It can be widely used even if it is incomplete or inaccurate.

It can be used to help overcome its own sheer bulk by helping to narrow the range of possibilities that must be usually considered.

Building a system to solve a problem requires the following steps

-  Define the problem precisely including detailed specifications and what constitutes an acceptable solution;

-   Analyse the problem thoroughly for some features may have a dominant affect on the chosen method of solution;

-  Isolate and represent the background knowledge needed in the solution of the problem;

-  Choose the best problem solving techniques in the solution.

Defining the Problem as state Search

To understand what exactly artificial intelligence is, we illustrate some common problems. Problems dealt with in artificial intelligence generally use a common term called 'state'. A state represents a status of the solution at a given step of the problem solving procedure. The solution of a problem, thus, is a collection of the problem states. The problem solving procedure applies an operator to a state to get the next state. Then it applies another operator to the resulting state to derive a new state. The process of applying an operator to a state and its subsequent transition to the next state, thus, is continued until the goal (desired) state is derived. Such a method of solving a problem is generally referred to as state space approach For example, in order to solve the problem play a game, which is restricted to two person table or board games, we require the rules of the game and the targets for winning as well as a means of representing positions in the game. The opening position can be defined as the initial state and a winning position as a goal state, there can be more than one. legal moves allow for transfer from initial state to other states leading to the goal state. However the rules are far too copious in most games especially chess where they exceed the number of particles in the universe 10. Thus the rules cannot in general be supplied accurately and computer programs cannot easily handle them. The storage also presents another problem but searching can be achieved by hashing. The number of rules that are used must be minimised and the set can be produced by expressing each rule in as general a form as possible. The representation of games in this way leads to a state space representation and it is natural for well organised games with some structure. This representation allows for the formal definition of a problem which necessitates the movement from a set of initial positions to one of a set of target positions. It means that the solution involves using known techniques and a systematic search. This is quite a common method in AI.

Formal description of a problem

- Define a state space that contains all possible configurations of the relevant objects, without enumerating all the states in it. A state space represents a problem in terms of states and operators that change states

-  Define some of these states as possible initial states;

-  Specify one or more as acceptable solutions, these are goal states;

-  Specify a set of rules as the possible actions allowed. This involves thinking about the generality of the rules, the assumptions made in the informal presentation and how much work can be anticipated by inclusion in the rules.

The control strategy is again not fully discussed but the AI program needs a structure to facilitate the search which is a characteristic of this type of program.

The water jug problem :There are two jugs called four and three ; four holds a maximum of four gallons and three a maximum of three gallons. How can we get 2 gallons in the jug four. The state space is a set of ordered pairs giving the number of gallons in the pair of jugs at any time ie (four, three) where four = 0, 1, 2, 3, 4 and three = 0, 1, 2, 3. The start state is (0,0) and the goal state is (2,n) where n is a don't care but is limited to three holding from 0 to 3 gallons. The major production rules for solving this problem are shown below: 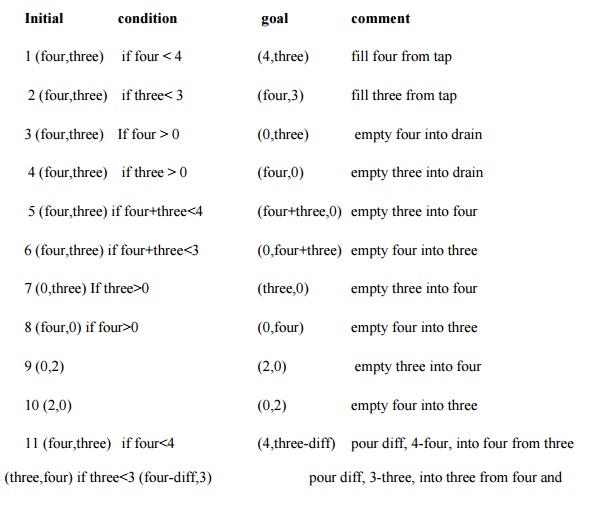 a solution is given below Jug four, jug three rule applied

A good control strategy should have the following requirement: The first requirement is that it causes motion. In a game playing program the pieces move on the board and in the water jug problem water is used to fill jugs. The second requirement is that it is systematic, this is a clear requirement for it would not be sensible to fill a jug and empty it repeatedly nor in a game would it be advisable to move a piece round and round the board in a cyclic way. We shall initially consider two systematic approaches to searching.

2.greater freedom in the order things are learned in A related property is the consistency of the knowledge. If an architecture must maintain a consistent knowledge base then any learning strategy it uses must be monotonic.