The natural abundance of zinc in the Earth’s crust is 0.02%. The principal ores of zinc are sphalerite or blende (sulfide), smithsonite (carbonate), calamine (silicate), and franklinite (zinc iron oxide). Zinc is used to form numerous alloys with other metals.

The natural abundance of zinc in the Earth’s crust is 0.02%. The principal ores of zinc are sphalerite or blende (sulfide), smithsonite (carbonate), calamine (silicate), and franklinite (zinc iron oxide). Zinc is used to form numerous alloys with other metals.

Zinc is ubiquitous in the body. It is the most abundant intracellular trace element, with >95% of the body zinc intracellular. An adult human contains about 2 g of zinc, of which about 60% and 30% are in skeletal muscle and bone, respectively, and 4–6% is present in skin (Table 9.11). Zinc turnover in these tissues is slow and, therefore, the zinc in these tissues is not accessible at times of deprivation. Because zinc is essential for the synthesis of lean tissue, it is while this is occurring that it may become a limiting nutrient. 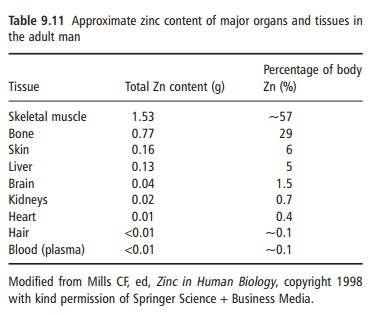 Although some zinc may be available in short-term zinc deprivation from a mobile hepatic pool, it is generally assumed that the body has no specific zinc reserve and is dependent on a regular supply of the element.

With essential roles in many fundamental cellular processes , it is not surprising that whole-body zinc content is tightly controlled. Zinc in foods is absorbed via a carrier-mediated transport process, which under normal physiological conditions appears not to be saturated. Zinc is absorbed throughout the small intestine. Proximal intestinal absorption is effi-cient, but it has a large enteropancreatic circulation; the net intestinal absorption of zinc is achieved by the distal small intestine. Zinc is transported in the plasma by albumin and α2-macroglobulin, but only 0.1% of body zinc is found in plasma. Body zinc content is regulated by homeostatic mechanisms over a wide range of intakes by changes in fractional absorp-tion (normally 20–40%) and urinary (0.5 mg/day) and intestinal (1–3 mg/day) excretion. For example, during periods of low zinc intake, absorption is enhanced and secretion of endogenous zinc into the gastrointestinal lumen is suppressed. In contrast, high zinc intake is associated with decreased absorption and enhanced secretion of endogenous zinc. Within cells, fluctuations in zinc content are modulated by changes in the amount of the metal associated with the storage protein metallothionein but there is a large number and variety of zinc homeostatic proteins found throughout cells. Although zinc transporters are very important for generating and maintaining zinc gradients across membranes and within cellular compartments, little is known about many aspects of their functions and regulatory modes of action.

The bioavailability of dietary zinc depends on dietary enhancers and inhibitors and host-related factors (Table 9.12). Diets can be roughly classified as 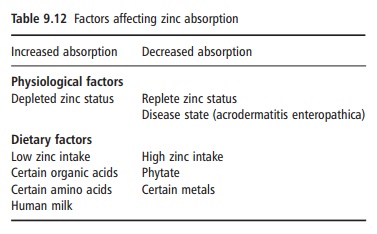 having a low, medium, or high bioavailability, accord-ing to the content of zinc, phytate, and animal protein. From a mixed animal and plant product diet, 20–30% zinc absorption can be expected. The lowest absorp-tion, 10–15%, is seen from diets prevalent in develop-ing countries that are based on cereals and legumes with a high phytate content and with negligible amounts of animal protein.

Zinc has three major groups of functions in the human body: catalytic, structural, and regulatory. Most biochemical roles of zinc reflect its involvement in the folding and activity of a large number (up to 10%) of proteins and over 100 different zinc metal-loenzymes have been identified, including RNA nucleotide polymerase I and II, alkaline phosphatase and carbonic anhydrases. Important structural roles for zinc are in the zinc finger motif in proteins, but also in metalloenzymes [e.g., copper/zinc superoxide dismutase (Cu/Zn-SOD)]. Zinc is also required by protein kinases that participate in signal transduction processes and as a stimulator of transacting factors responsible for regulating gene expression. Zinc plays an important role in the immune system and, though not a redox-active transition metal, is an antioxidant in vivo.

The clinical manifestations of severe zinc deficiency in humans are growth retardation, sexual and skeletal immaturity, neuropsychiatric disturbances, derma-titis, alopecia, diarrhea, increased susceptibility to infections, and loss of appetite. Many of these fea-tures, by and large, represent the dependence on zinc of tissues with a high rate of turnover. However, severe zinc deficiency in humans is rare, and more interest has been focused on marginal zinc deficiency. This is more difficult to diagnose and often occurs with other micronutrient deficiencies including iron. The current understanding of zinc deficiency is largely based on responses to zinc supplementation. Zinc supplemen-tation has been reported to stimulate growth and development in infants and young children, and reduce morbidity (diarrhea and respiratory infec-tions) in children, particularly in developing coun-tries and can increase both innate and adaptive immunity. In women, low serum zinc concentration during pregnancy was found to be a significant