Selenium is a nonmetallic element that has similar chemical properties to sulfur and has four natural oxidation states (0, −2, +4, +6).

Selenium is a nonmetallic element that has similar chemical properties to sulfur and has four natural oxidation states (0, −2, +4, +6). It combines with other elements to form inorganic selenides [sodium selenide (−2) Na2Se], selenites [sodium selenite (+4) Na2SeO3] and selenates [sodium selenate (+6) Na2SeO4], and with oxygen to form oxides [selenium (+4) dioxide SeO2] and oxyacids [selenic (+6) acid H2SeO4]. Selenium replaces sulfur to form a large number of organic selenium compounds, parti-cularly as selenocysteine, the twenty-first amino acid. Selenium is a component of selenoproteins, where it also occurs as selenides on the side-chains of seleno-cysteine at physiological pH. Selenium also displaces sulfur to form the amino acid selenomethionine.

Selenium has many industrial uses, e.g., in elec-tronics, glass, ceramics, pigments, as alloys in steel, as catalysts in pharmaceutical production, in rubber vulcanization and in agriculture, as feed supplements and fertilizers. Because of its increasing use, selenium has become a potential health and environmental hazard. The primary pathway of exposure to selenium for the general population is food, followed by water (predominantly inorganic selenate and selenite), and air (mainly as elemental particulate selenium from combustion of fossil fuels and from volcanic gas).

There is a narrow margin, perhaps not much more than three- or fourfold, between beneficial and harmful intakes of selenium. The dose necessary to cause chronic selenosis in humans is not well defined, but the threshold for toxicity appears to lie some-where in the range of 850–900 mg/day. Symptoms of chronic selenium toxicity include brittle hair and nails, skin lesions with secondary infections, and garlic odor on the breath, resulting from the expira-tion of dimethyl selenide. Toxicity depends on the chemical form of selenium, with most forms having low toxicity. Data from animal studies indicate that selenite and selenocysteine are a little more toxic than selenomethionine and much more toxic than other organic selenium compounds (dimethyl selenide, tri-methyselenonium ion, selenoethers, selenobetaine). Methylation in the body is important for detoxifica-tion of the element.

Although no important genetic diseases affecting selenium status are apparent, polymorphisms in gene sequences of some selenoenzymes may determine selenium utilization and metabolic needs, and hence dietary requirements. These polymorphisms may explain the signifi-cant variation among individuals in the extent of the response to supplementation of selenoenzyme activities.

Plasma or whole blood, hair, and toenail selenium concentrations can indicate changes in selenium status in humans. Plasma and serum selenium con-centrations respond rapidly to changes in selenium intakes, whereas erythrocyte selenium is an index of longer term or chronic intake. Dietary intake data, however, are insufficient to determine selenium status in individuals because of uncertainties about bio-availability and variations in the content and form of selenium in foodstuffs. Although plasma (or prefera-bly platelet) glutathione peroxidase activities have been used as functional indices to estimate selenium requirements, it has not been established how these measurements relate to other biochemical functions of selenium, such as thyroid metabolism, or immune function and their health sequelae. For example, at higher levels of selenium intake, glutathione peroxi-dase activities plateau but immunoenhancement may be evident at supplementation levels higher than those needed to optimize the selenoenzyme activity. Perhaps the best way forward is to select from a battery of functional indices, such as selenoenzyme activity, plasma thyroid hormone concentrations, and immune measures, according to the function or disease under investigation. 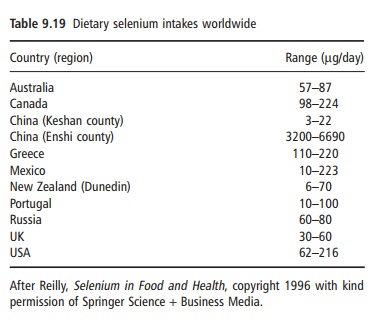 (which corresponds to lower status and intake than that needed to saturate platelet glutathione peroxi-dase activity) in the vast majority (97.5%) of all indi-viduals in a population. The RDAs for both men and women is 55 μg/day in the USA. In the UK, the refer-ence nutrient intake (RNI) has thus been set at 75 and 60 μg/day selenium for men and women, respectively. Blood selenium concentrations in the UK population have declined by approximately 50% over the past 30 years and current UK intakes are only about 50% of the RNI. As explained previously, however, there is uncertainty as to what constitutes optimum selenium status and the intakes of selenium in various dietary regimens needed to achieve optimum status. Optimum status may not necessarily be reflected in saturated glutathione peroxidase activity. The UL for adults is set at 400 μg/day in the USA and at 300 μg/day in the EU.

Selenium enters the food chain through plants that, in general, largely reflect concentrations of the element in the soil on which the plants were grown. The absorption of selenium by plants, however, is depen-dent not only on soil selenium content but also on pH, microbial activity, rainfall, and the chemical form of selenium. Higher plants absorb selenium preferen-tially as selenate and can synthesize organic selenium compounds, e.g., selenomethionine, and to a lesser extent selenocysteine. Brazil nuts contain high con-centrations of selenium because of the seleniferous soils in the Andes mountains but also the efficiency of accumulation of selenium by the plants species.

Selenium concentrations of cereals and staples are much lower, but the content and bioavailability of selenium in wheat usually make this a major con-tributor to overall selenium intakes because of the high quantities of wheat consumed as bread and other baked products. Wheat is the most efficient accumulator of selenium within the common cereal crops (wheat > rice > maize > barley > oats). There are major varietal differences in selenium uptake and for wheat, tomatoes, soybean, and onions, there are up to fourfold differences in uptake of selenium from soils amongst cultivars. The ability of plants to accu-mulate selenium has been useful for agronomic bio-fortification, which differs from food fortification where the nutrient is added during food processing. The Finnish Policy (1984) has led to a 10-fold increase in cereal grain selenium concentration as well as marked increases in fruit and vegetables and meat concentrations as a result of adding selenium to fertil-izers used for grain production and horticulture and fodder crop and hay production. The resulting increase in the selenium status of the population is largely owing to wheat (bread) consumption but the biofortification of vegetables may also have an impact on public health as, in contrast to wheat, where the major selenocompound is selenomethionine, seleno-methylselenocysteine is the predominant form in vegetables; the last compound may have important cancer chemoprotective effects (see also Figure 9.8) Fish, shellfish, and offal (liver, kidney) are rich sources of selenium, followed by meat and eggs. Animal sources, however, have lower bioavailability of sele-nium than do plant sources. 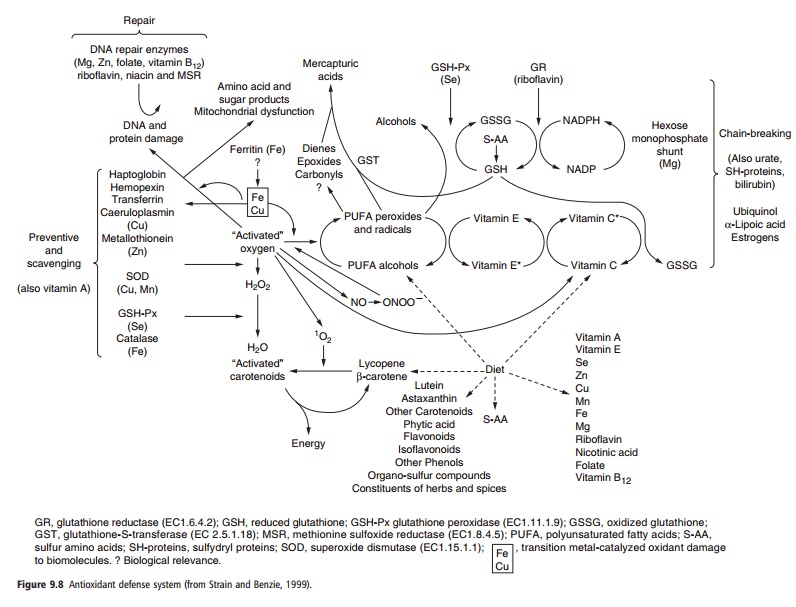 Selenium is an antioxidant nutrient and has impor-tant interactions with other antioxidant micronutri-ents, especially vitamin E (Figure 9.8). Vitamin E, as an antioxidant, can ameloriate some of the symptoms of selenium deficiencies in animals. Copper deficiency also increases oxidative stress, and the expression of glutathione peroxidase genes is decreased in the copper-deficient animal.

The metabolic interactions between selenium and other micronutrients, however, extend beyond those between selenium, vitamin E, and other antioxidants. Peripheral deiodination of thyroxine (T4), the pre-dominant hormone secreted by the thyroid, to the more biologically active triiodothyronine (T3) in extrathyroidal tissues is accomplished through the selenium-dependent deiodinase enzymes. Selenium deficiency, therefore, can contribute to iodine defi-ciency disorders, and goiter complications have been noted in up to 80% of Keshan’s disease casualties after autopsy. Moreover, higher serum T4 concentrations were found in patients with subacute Keshan’s disease and in children with latent Keshan’s disease compared with the respective controls. All thyroid hormone concentrations in these studies were within normal ranges, suggesting that selenium deficiency, or even suboptimal selenium status, was blocking optimum thyroid and iodine metabolism.

Vitamins C and E, sulfur amino acids and sulfate, arsenic, and heavy metals can decrease the toxicity of selenium. Conversely, selenium modifies the toxicity of many heavy metals. In seafoods, selenium is com-bined with mercury or methyl mercury and this inter-action may be one of the factors that decreases the bioavailability of selenium in these foods. Indeed, well-known antagonistic interactions of selenium with both mercury and arsenic suggest that selenium can promote detoxification effects with respect to these toxins.