Several disease states are associated with phosphorus deficiency, some of which have genetic roots, for example X-linked hypophosphatemia, hypophospha-temic bone disease, and Fanconi’s syndrome.

Phosphorus is never found free in nature, but is widely distributed in combination with minerals. Phosphate rock, which contains the mineral apatite, an impure tricalcium phosphate, is an important source of the element. Phosphorus is most commonly found in nature in its pentavalent form in combina-tion with oxygen as phosphate (PO43−). Phosphorus (as phosphate) is an essential constituent of all known protoplasm and is uniform across most plant and animal tissues. A practical consequence is that, as organisms consume other organisms lower in the food chain (whether animal or plant), they automati-cally obtain their phosphorus.

●adjustments in the hormonal control system regu-lating the calcium economy

● in some animal models, increased porosity of the skeleton

● a suggestion that high phosphorus intakes could decrease calcium absorption by complexing calcium in the chyme.

Several disease states are associated with phosphorus deficiency, some of which have genetic roots, for example X-linked hypophosphatemia, hypophospha-temic bone disease, and Fanconi’s syndrome.

X-linked hypophosphatemia is, as the name implies, inherited as an X-linked dominant trait with the mutant gene located in Xp22.2–p.22.1. The classical triad, fully expressed in hemizygous male patients, consists of:

Although low serum phosphate is evident early after birth, it is only at the time of weight bearing that leg deformities and progressive departure from the normal growth rate become sufficiently striking to attract attention and make parents seek medical opinion. It is generally accepted that hypophosphate-mia is the consequence of a primary inborn error of phosphate transport, probably located in the proxi-mal nephron.

Hypophosphatemic bone disease is characterized clinically by modest shortening of stature, bowing of the lower limbs, and nonrachitic bone changes (some-what resembling metaphyseal chondrodysplasia) and biochemically by hypophosphatemia. Although a defect in renal transport of phosphate was demon-strated, the defect appeared to be different from that of X-linked hypophosphatemia.

Fanconi’s syndrome is an autosomal dominant dis-order. It is characterized by lactic aciduria and tubular proteinuria in childhood, with glycosuria and amino-aciduria developing in the second decade and osteo-malacia from the start of the fourth decade. Glomerular function deteriorates slowly but is compatible with a normal lifespan. There has been reported linkage of the disorder to chromosome 15q15.3.

Previously, dietary phosphorus recommendations have been tied to those for calcium, usually on an equimass or equimolar basis, and this approach was used in the USA, EU, and UK in establishing recom-mended dietary allowances, population reference intakes, and reference nutrient intakes, respectively, for phosphorus. However, in 1997 the US Food and Nutrition Board suggested that a calcium–phospho-rus concept of defining phosphorus requirements is of severely limited value, in that there is little merit in having the ratio “correct” if the absolute quantities of both nutrients are insufficient to support optimal growth. Therefore, because the phosphorus intake directly affects serum inorganic phosphate, and because both hypophosphatemia and hyperphospha-temia directly result in dysfunction or disease, the US Food and Nutrition Board considered that the most logical indicator of nutritional adequacy of phospho-rus intake in adults is inorganic phosphate. If serum inorganic phosphate is above the lower limits of normal for age, the phosphorus intake may be con-sidered adequate to meet cellular and bone formation needs of healthy individuals. Current US RDAs for phosphorus are infants 100 mg (first 6 months), 275 mg (7–12 months), children 460 mg (1–3 years), 500 mg (4–8 years), 1250 mg (9–18 years), adults 700 mg, pregnant women 1250 mg (<18 years), 700 mg (19–50 years), and lactating women 1250 mg (<18 years), 700 mg (19–50 years).

Phosphates are found in foods as naturally occur-ring components of biological molecules and as food additives in the form of various phosphate salts. The phosphorus density of cow’s milk and other dairy produce is higher than that of most other foods in a typical diet (Table 9.2). The same is true for diets high in colas and a few other soft drinks that use phos-phoric acid as an acidulant. 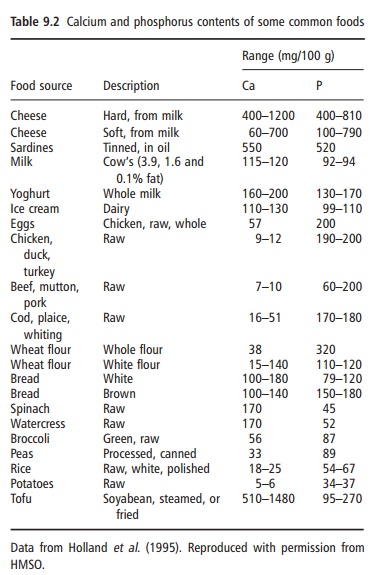 It has been reported that intakes of polyphosphates, such as are found in food additives, can interfere with the absorption of iron, copper, and zinc.