Iron is a relatively abundant element in the universe.

Iron is a relatively abundant element in the universe.

It is found in the sun and many types of stars in considerable quantity. The core of the Earth is thought to be largely composed of iron and it makes up 4.7% of the Earth’s crust. The most common ore is hematite, which is frequently seen as black sands along beaches and streams. Taconite is becoming increasingly important as a commercial ore. Because iron is easy to obtain, its discovery is lost in the history of man, many thousands of years ago. The early Greeks were aware of the health-giving properties of iron. Iron has been used for centuries as a health tonic. It is therefore paradoxical that although the need for iron was discovered long ago and although it is the most common and cheapest of all metals, iron deficiency is probably the most frequent deficiency disorder in the world and the main remaining nutritional deficiency in Europe. Iron can exist in oxidation states ranging from −2 to +6. In biological systems, these oxidation states occur primarily as the ferrous (Fe2+) and ferric (Fe3+) forms and these are interchangeable.

The iron content of a typical 70 kg adult man is approximately 4–5 g. Of this content, approximately two-thirds is utilized as functional iron such as hemoglobin (60%), myoglobin (5%), and various heme (cytochromes and catalase) and nonheme (NADH hydrogenase, succinic dehydrogenase, aconitase) enzymes (5%). The remaining iron is found in body storage as ferritin (20%) and hemosiderin (10%), the two major iron storage proteins. Only very minor quantities of iron (<0.1%) are found as a transit chelate with transferrin, the main iron transport protein in the body.

The metabolism of iron differs from that of other minerals in one important respect: there is no physiological mechanism for iron excretion. The body has three unique mechanisms for maintaining iron balance and preventing iron deficiency and iron overload:

● reutilization of iron (especially of iron in erythrocytes)

In theory, therefore, when the body needs more iron, absorption is increased, and when the body is iron sufficient, absorption is restricted. This control is not perfect but is still of great importance for the preven-tion of iron deficiency and excess. Iron from food is absorbed mainly in the duodenum by an active process that transports iron from the gut lumen into the mucosal cell. When required by the body for meta-bolic processes, iron passes directly through the mucosal cell into the bloodstream, where it is trans-ported by transferrin, together with the iron released from old blood cells (i.e., the efficient iron recycling system, Figure 9.5), to the bone marrow (80%) and other tissues (20%). If iron is not required by the body, iron in the mucosal cell is stored as ferritin and is excreted in feces when the mucosal cell is exfoliated. Any absorbed iron in excess of needs is stored as ferri-tin or hemosiderin in the liver, spleen, or bone marrow. Iron can be released from these iron stores for utiliza-tion in times of high need, such as during pregnancy. 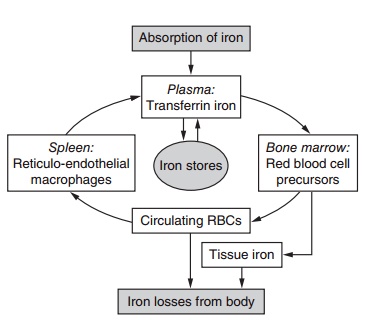 Figure 9.5 Metabolism of iron. There is a main internal loop with a continuous reutilization of iron and an external loop represented by iron losses from the body and absorption from the diet. Adapted from Hallberg et al. (1993) with permission of Elsevier.

Heme iron is absorbed by a different mechanism from nonheme iron. The heme molecule is absorbed intact into the mucosal cell, where iron is released by the enzyme heme oxygenase. Its absorption is little influenced by the composition of the meal, and varies from 15% to 35% depending on the iron status of the consumer. Although heme iron represents only 10– 15% of dietary iron intake in populations with a high meat intake, it could contribute 40% or more of the total absorbed iron (Figure 9.6). Many poorer regions of the world consume little animal tissue and rely entirely on nonheme iron. The absorption of nonheme iron is strongly influenced by dietary components, which bind iron in the intestinal lumen. The com-plexes formed can be either insoluble or so tightly bound that the iron is prevented from being absorbed. Alternatively, the complexes can be soluble and iron absorption is facilitated. Under experimental condi-tions, nonheme iron absorption can vary widely from less than 1% to more than 90%, but under more typical dietary conditions it is usually in the region of 1–20%. The main inhibitory substances and enhanc-ers of iron absorption are shown in Table 9.9.

Figure 9.6 Heme and nonheme iron in foods: (a) foods of animal origin; (b) foods of plant origin; (c) dietary iron intake from all foods, daily average. 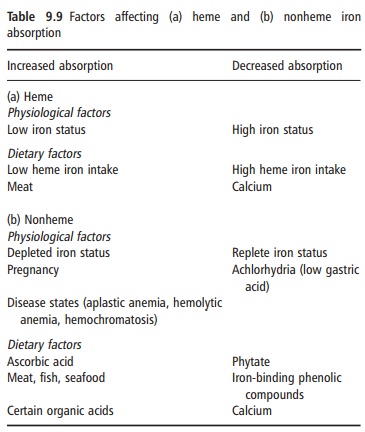 Iron acts as a catalytic center for a broad spectrum of metabolic functions. As present in hemoglobin, iron is required for the transport of oxygen, critical for cell respiration. As myoglobin, iron is required for oxygen storage in muscle. Iron is also a component of various tissue enzymes, such as the cytochromes, that are critical for energy production, and enzymes necessary for immune system functioning. Therefore, these iron-containing molecules ensure that body fuels, such as carbohydrate, fat, and protein are oxidized to provide the energy necessary for all physiological pro-cesses and movement. The importance of iron as an element necessary for life derives from its redox reac-tivity as it exists in two stable, interchangeable forms, ferrous (Fe2+) and ferric (Fe3+) iron. This reaction is an essential part of the electron transport chain, responsible for the generation of ATP during the oxi-dation of substances in intermediary metabolism and for the reductions necessary in the synthesis of larger molecules from their components.

The progression from adequate iron status to iron-deficiency anemia develops in three overlapping stages. The first stage consists of depletion of storage iron, which is characterized by a decrease in serum ferritin, which, in turn, reflects the size of the iron stores in the liver, bone marrow, and spleen. The second stage is a decrease in transported iron and is characterized by a decline in serum iron and an increase in the total iron-binding capacity, as transfer-rin has more free binding sites than in normal iron status. The third stage develops when the supply of iron is insufficient to provide for enough hemoglobin for new erythrocytes and insufficient to fulfill other physiological functions. During the last stage, free protoporphyrin, destined for hemoglobin, increases in plasma two- to fivefold, indicating a lack of tissue iron. The harmful consequences of iron deficiency occur mainly in conjunction with anemia. Iron defi-ciency anemia is most common in infants, preschool children, adolescents, and women of child-bearing age, particularly in developing countries.

The functional effects of iron deficiency anemia result from both a reduction in circulating hemoglobin and a reduction in iron-containing enzymes and myoglobin. Both factors presumably play a role in the fatigue, restlessness, and impaired work performance associated with iron deficiency anemia. Other func-tional defects include disturbances in normal thermoregulation and impairment of certain key steps in the immune response. For example, there is evidence that iron deficiency anemia is associated with lower T- and B-lymphocyte, macrophage, and neutrophil function. Although the phagocytic uptake of neutrophils is usually normal, the intracellular killing mechanism is usually defective. This abnormality is thought to be owing to a defect in the generation of reactive oxygen intermediates resulting from a decrease in the iron-containing enzyme myeloperoxidase. Iron deficiency anemia can also have an adverse effect on psychomotor and mental development in children, and the mortality and morbidity of mother and infant during pregnancy.