Like calcium, magnesium is an alkaline earth metal. Magnesium is the eighth most abundant element in the Earth’s crust.

Calcium is a metallic element, fifth in abundance in the Earth’s crust, of which it forms more than 3%. Calcium is never found in nature uncombined; it occurs abundantly as chalk, granite, eggshell, sea-shells, “hard” water, bone, and limestone. The metal is used as a reducing agent in preparing other metals such as thorium, uranium, and zirconium, and is used as a deoxidizer, disulfurizer, or decarburizer for various ferrous and nonferrous alloys. It is also used as an alloying agent for aluminum, beryllium, copper, lead, and magnesium alloys. Calcium was among the first materials known to be essential in the diet. All foods of vegetable origin contain small but useful amounts of calcium. Animals concentrate calcium in milk, and milk and dairy products are the most important food sources of calcium for many human populations.

The available data on the adverse effects of high calcium intakes in humans are primarily from the intake of calcium from nutrient supplements. The three most widely studied and biologically important are:

●      the syndrome of hypercalcemia and renal insuffi-ciency, with or without alkalosis (referred to his-torically as milk alkali syndrome associated with peptic ulcer treatments);

●      the effect on absorption of other essential minerals, e.g., iron, zinc, magnesium and phosphorus.

Based largely on the data concerning the association of high calcium intakes with hypercalcemia and renal insufficiency in adults, the US Food and Nutrition Board established a tolerable upper intake level (UL) of calcium of 2500 mg/day for children, adolescents, and adults, as well as pregnant and lactating women.

There is, as yet, no biochemical indicator that reflects calcium nutritional status. Blood calcium concentra-tion, for example, is not a good indicator because it is tightly regulated. There are, however, some poten-tial indicators of nutritional calcium adequacy, which are related to content or metabolism of the skeletal calcium reserve. Measures of bone mass may be used as indicators of body calcium status. These include bone mineral content (BMC, which is the amount of mineral at a particular skeletal site such as the femoral neck, lumbar spine, or total body) and bone mineral density (BMD, which is BMC divided by the area of the scanned region). Besides their relationship to bone mass and strength, BMD and BMC are strong predictors of fracture risk and are thus functional indicators of calcium status. The US Food and Nutrition Board used data relating dietary calcium intake to BMD and BMC to establish the estimates of calcium intake requirements for pregnancy and lacta-tion. Desirable calcium retention, which is based on balance data, may be considered a functional indica-tor of nutritional adequacy of calcium in population groups and was used by the US Food and Nutrition Board in 1997 to establish recommendations for daily calcium intakes. This is based on the concept that to maximize skeletal strength, optimum bone mass must be attained through a maximum skeletal calcium reserve. Finally, recent research suggests that bio-chemical markers of bone turnover that predict bone mass changes and fracture risk may be functional indicators of the adequacy of calcium intake. This requires more investigation.

Milk and milk products are the most important dietary sources of calcium for most people in Western countries, with cereal products and fruits and vegeta-bles each making a much smaller contribution (Table 9.2). For example, the contribution of dairy products to total calcium intake has been estimated as 73% in the Netherlands, 51–52% in Germany, 51–52% in the USA, 57% in the UK and 44% in Ireland. Tinned fish, such as sardines, are rich sources of calcium but do not make a significant contribution to intake for most people. In general, foods of plant origin are not very rich sources of calcium. However, owing to the level of consumption, foods of plant origin make a signifi-cant contribution to total calcium intake. For example, in the USA, cereals contribute about 25–27% of total calcium intake, whereas in the UK cereals contribute about 25% of total calcium intake with about 14% from bread because of calcium fortification of white flour. Increased availability of calcium-fortified foods and dietary supplements containing calcium salts is leading to a wider range of rich dietary sources of calcium. Contributions from nutritional supplements or medicines may be significant for some people. Given the high proportion of body calcium which is present in bone, and the importance of bone as the major reservoir for calcium, development and main-tenance of bone is the major determinant of calcium needs. Thus, unlike other nutrients, the requirement for calcium is considered to relate not to the mainte-nance of the metabolic function of the nutrient but to the maintenance of an optimal reserve and the support of the reserve’s function (i.e., bone integrity).

Calcium requirements, therefore, vary throughout an individual’s life, with greater needs during the periods of rapid growth in childhood and adolescence, during pregnancy and lactation, and in later life. There are important genetic and environmental influences of calcium requirements. Genetic influences include such factors as bone architecture and geometry, and responsiveness of bone to hormones that mediate the function of bone as the body’s calcium reserve. Environmental influences include factors such as dietary constituents and the degree of mechanical loading imposed on the skeleton in everyday life. Because of their effects on urinary calcium losses, high intakes of both sodium and protein increase dietary calcium requirements.

There is considerable disagreement over human calcium requirements, and this is reflected in the wide variation in estimates of daily calcium requirements made by different expert authorities. For example, expert committees in the USA and the EU have 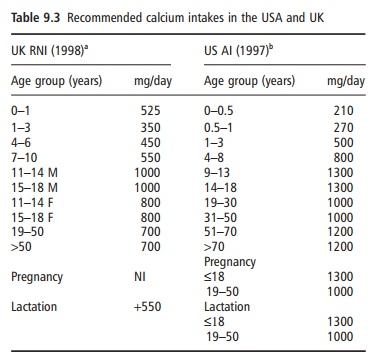 established very different recommendations for calcium intake (Table 9.3). Much of this divergence arises because of different interpretations of available human calcium balance data. The higher recommen-dations in the USA derive from defining calcium requirements based on desirable calcium retention estimated from human calcium balance studies, i.e., that which results in the maximum skeletal calcium reserve.

There is considerable evidence from studies on exper-imental animals that excessive calcium intake can impair the nutritional status of other nutrients, particularly iron, zinc, and magnesium, but data on humans are not clear. While calcium interacts with magnesium and phosphorus, and reduces their absorption, there is no evidence that high calcium intakes are associated with depletion of the affected nutrient. Calcium inhibits the absorption of iron in a dose-dependent and dose-saturable fashion. However, the available human data fail to show cases of iron deficiency or even decreased iron stores as a result of high calcium intake. There is some evidence that high dietary calcium intakes reduce zinc absorption and balance in humans and may increase the zinc require-ment. Overall, the available data on the interaction of calcium with these nutrients do not show any clinically or functionally significant depletion of the affected nutrient in humans and, in the context of risk assessment, these interactions should probably not be considered adverse effects of calcium. However, such interactions deserve further investigation. It is well established that a deficiency of vitamin D (arising from a lack of exposure to sunlight, inadequate dietary intake, or both) can result in a reduced efficiency of intestinal calcium absorption that, in turn, can lead to a decrease in serum ionized calcium.