Manganese is widely distributed in the biosphere: it constitutes approximately 0.085% of the Earth’s crust, making it the twelfth most abundant element.

Manganese is widely distributed in the biosphere: it constitutes approximately 0.085% of the Earth’s crust, making it the twelfth most abundant element. Manganese is a component of numerous complex minerals, including pyroluosite, rhodochrosite, rhodanite, braunite, pyrochite, and manganite. Chemical forms of manganese in their natural depos-its include oxides, sulfides, carbonates, and silicates. Anthropogenic sources of manganese are predomi-nantly from the manufacturing of steel, alloys, and iron products. Manganese is also widely used as an oxidizing agent, as a component of fertilizers and fun-gicides, and in dry cell batteries. The permanganate is a powerful oxidizing agent and is used in quantitative analysis and medicine.

Manganese is a transition element. It can exist in 11 oxidation states from −3 to +7, with the most common valences being +2, +4, and +7. The +2 valence is the predominant form in biological systems, the +4 valence occurs in MnO2, and the +7 valence is found in permanganate.

Manganese toxicity of dietary origin has not been well documented. Toxicity has been observed only in workers exposed to high concentrations of manga-nese dust or fumes in air. For example, mine-workers in Chile exposed to manganese ore dust developed, possibly as a result of inhalation rather than inges-tion, “manganic madness,” manifested by psychosis, hallucinations, and extrapyramidal damage with features of parkinsonism.

In 2001, the US Food and Nutrition Board set the tolerable UL for manganese at 11 mg/day for adults (19 years and older). Elevated blood manganese con-centrations and neurotoxicity were selected as the critical adverse effects on which to base their UL for manganese.

Progress in the field of manganese nutrition has been hampered because of the lack of a practical method for assessing manganese status. Blood manganese concentrations appear to reflect the body manganese status of rats fed deficient or adequate amounts of manganese, but consistent changes in blood or plasma manganese have not been observed in depleted or repleted human subjects. Researchers are actively investigating whether the activities of manganese-dependent enzymes, such as manganese-SOD in blood lymphocytes and blood arginase, may be of use in detecting low manganese intake; however, there is evidence that these enzymes can be influenced by certain disease states. 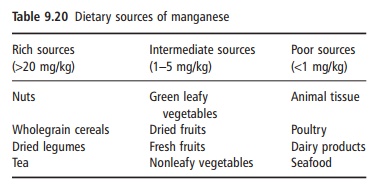