Copper occurs in the environment in three oxidation states. Copper (0) metal is used widely in the building industry (e.g., water pipes, electrical wires) because of its properties of malleability, ductibility, and high thermal and electrical conductivity.

Copper occurs in the environment in three oxidation states. Copper (0) metal is used widely in the building industry (e.g., water pipes, electrical wires) because of its properties of malleability, ductibility, and high thermal and electrical conductivity. Brass, an alloy of copper and zinc, is used for cooking utensils and musical instruments, and bronze, an alloy of copper and tin, has been used in castings since early times. Copper-based alloys and amalgams are used in dental bridges and crowns, and copper is a constituent of intrauterine contraceptive devices. Copper com-pounds are widely used in the environment as fertil-izers and nutritional supplements and, because of their microbicidal properties, as fungicides, algicides, insecticides, and wood preservatives. Other industrial uses include dye manufacturing, petroleum refining, water treatment, and metal finishing. Copper com-pounds in the cuprous (1) state are easily oxidized to the more stable cupric (2) state, which is found most often in biological systems.

Acute copper toxicity in humans is rare and usually occurs from contamination of drinking water, beverages, and foodstuffs from copper pipes or con-tainers, or from accidental or deliberate ingestion of large amounts of copper salts. Symptoms include vomiting, diarrhea, hemolytic anemia, renal and liver damage, sometimes (at about 100 g or more) followed by coma and death. Clinical symptoms of chronic copper toxicity appear when the capacity for protec-tive copper binding in the liver is exceeded. These symptoms include hepatitis, liver cirrhosis, and jaundice.

Consumption of formula milks, heavily contami-nated with copper after boiling or storage in brass vessels, is usually a feature of Indian childhood cir-rhosis, which occurs in early-weaned infants between the ages of 6 months and 5 years. Symptoms include abdominal distension, irregular fever, excessive crying, and altered appetite, followed by jaundice and often death. Some believe that a genetic disorder enhances susceptibility to this toxicity syndrome, associated with excessive dietary exposure to copper and massive accumulation of liver copper.

There are several disorders that result in deficiency or toxicity from exposure to copper intakes that are adequate or tolerated by the general population. The most important of these are Menkes’ syndrome, an X-linked copper deficiency that is usually fatal in early childhood; Wilson’s disease, an autosomal recessive disorder resulting in copper overload; and acerulo-plasminemia, an autosomal recessive disorder of iron metabolism. All three disorders are characterized by low serum copper and ceruloplasmin.

Menkes’ syndrome, which affects 1 in 300 000 in most populations, is caused by mutations in the gene that encodes a novel member of the family of cation-transporting p-type ATPases. The gene is expressed in extrahepatic tissues, and symptoms result from an inability to export copper from cells, particularly from intestinal cells and across the placenta. The syn-drome has three forms, classic, mild, and occipital horn. Among the symptoms of the classic (most severe) Menkes’ syndrome are abnormal myelination with cerebellar neurodegeneration (giving progres-sive mental retardation), abnormal (steely, kinky) hair, hypothermia, hypopigmentation, seizures, con-vulsions, failure to thrive, and connective tissue abnormalities resulting in deformities in the skull, long bones and ribs, and twisted, tortuous arteries. Death usually occurs in the severe forms before 3 years of age.

Wilson’s disease, which affects 1 in 30 000 in most populations, is caused by numerous (over 100 recognized) mutations in the gene for a copper-transporting ATPase. The defect results in impaired biliary excretion of copper and accumulation of copper in the liver and brain of homozygous indi-viduals or compound heterozygotes. Abnormalities in copper homeostatis, however, may also occur in het-erozygous carriers, who may make up 1–2% of the population. The age of onset is from childhood onwards and patients may present in three different ways: with hepatic symptoms (liver cirrhosis and fatty infiltration in the latter stages), with neurological symptoms (degeneration of the basal ganglia result-ing in defective movement, slurred speech, difficulty swallowing, face and muscle spasms, dystonia, and poor motor control), or with psychiatric and behav-ioral problems (including depression and schizophre-nia, loss of emotional control, temper tantrums, and insomnia). Kayser–Fleischer rings (corneal copper deposits) in the eyes are generally present in neuro-logical or psychiatric presentations. The phenotypic differences between Wilson’s disease and Menkes’ syndrome are probably owing to the tissue-specific expression of the ATPase genes.

If Wilson’s disease is diagnosed early, copper chela-tion therapy, usually with D-penicillamine, can be beneficial, although neurological symptoms are often irreversible and liver disease may be advanced at the time of diagnosis. Zinc supplements limit copper absorption and subsequent accumulation, and this is the treatment of choice for maintenance therapy.

Aceruloplasminemia, which affects about 1 in 2 million individuals, is caused by mutations in the ceruloplasmin gene. Ceruloplasmin is involved in iron metabolism and, in the disease, there is an accu-mulation of ferrous iron within the recticuloendothe-lial system with pathogenesis mainly linked to the slow accumulation of iron in the brain, rather than other tissues. Symptoms include dementia, speech problems, retinal degeneration, poor muscle tone, and diabetes. Early therapy with the high-affinity iron chelator desferoxamine can relieve some of the symptoms.

Disruption of copper metabolism may be involved in other neurodegenerative diseases such as the accu-mulation of amyloid β-protein in Alzheimer’s disease and the accumulation of modified prion protein in human prion disease.

About 10% of motor neuron disease cases are familial and 20% of these are owing to autosomal dominant inheritance of mutations in the Cu/Zn-SOD (SODI) gene. It is unclear how changes in activity of this copper enzyme might be involved in the progressive muscle weakness and atrophy of motor neuron disease or in Down’s syndrome, where additional Cu/Zn-SOD activity results from the SODI gene being present in the extra chro-mosome 21.

It is possible to diagnose severe copper deficiency in infants from plasma or serum copper, ceruloplasmin protein, and neutrophils. These measures, however, cannot be used to detect suboptimal copper status in individuals, as such measures are insensitive to small changes in copper status and there are intractable problems in interpretation. Ceruloplasmin, the major copper protein in plasma or serum, is an acute-phase reactant and is raised by cigarette smoking, oral contraceptives, estrogens, pregnancy, infections, inflammation, hematological diseases, hypertension, diabetes, cardiovascular diseases, cancer, and cirrho-sis, and after surgery and exercise.

Currently, there is no adequate measure of subop-timal (or supraoptimal) copper status and this is a major barrier to determining precise dietary require-ments for copper and the possible role of suboptimal or supraoptimal copper status in the etiology of chronic disease. Table 9.16 gives some of the func-tional indices (classified as molecular, biochemical, and physiological) that might be used to define sub-optimal or supraoptimal status in humans. A valid functional index of copper status in humans must respond sensitively, specifically, and predictably to changes in the concentration and supply of dietary copper or copper stores, be accessible for measure-ment and measurable, and impact directly on health. As such, indices in Table 9.16 have not been validated and many lack sensitivity and specificity. Perhaps, the best way forward is to use a combination of measures. Among the more promising are erythrocyte super-oxide dismutase activity, platelet cytochrome c oxidase, plasma diamine oxidase, plasma peptidyl glycine α-amidating mono-oxygenase, urinary pyri-dinium cross-links of collagen (may indicate lowered activity of the cuproenzyme, lysyl oxidase), and various immunological measures. 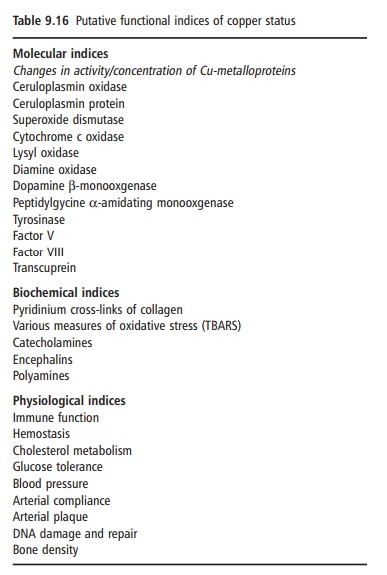 Although copper is the third most abundant trace element, after iron and zinc, in the body, precise dietary requirements for copper are still subject to conjecture because of the difficulty in assessing copper status. Current estimates suggest that the require-ments for copper for the great majority of adults are below about 1.5 mg copper/day, while most people can tolerate 3 mg copper/day or more over the long term and 8–10 mg copper/day or more in the shorter term (over several months). Using similar data from copper supplementation trials where there was an absence of any adverse effects on liver function, UL for copper was derived to be 10 mg/day in the US and 5 mg/day in the EU; the difference owing to the use of different uncertainty factors in the derivation.

Estimates of average intakes of copper are about 1.5 and 1.2 mg copper/day for men and women, respec-tively, on mixed diets, with higher intakes for those on vegetarian diets or those consuming water with appreciable concentrations of copper. Particularly rich food sources of copper include offal, seafood, nuts, seeds, legumes, wholegrain cereals, and choco-late. Milk and dairy products are very low in copper and infants are at risk of copper deficiency if they are fed exclusively on cow’s milk.

The major micronutrient interactions with copper are those involving zinc and iron, high intakes of which can restrict copper utilization in infants and adults. The mechanism by which zinc appears to exert on antagonistic effect on copper status is through the induction of metallothionein synthesis by zinc in mucosal cells in the intestine. Metallothionein has a particularly strong affinity for copper. Metallothionein-bound copper is not available for transport into the circulation and is eventually lost in the feces when the mucosal cells are sloughed off. Molybdenum also has a strong interaction with copper and thiomolybdates are potent systemic copper antagonists. Although both cadmium and lead can inhibit copper utiliza-tion, this inhibition only occurs at dietary intakes of these heavy metals above those normally consumed by humans. Vitamin E, selenium, and manganese have metabolic interactions with copper as antioxi-dants, but data on beneficial interactions of these on symptoms of copper deficiency are largely confined to animal studies. Copper deficiency exerts an effect on iodine metabolism resulting in hypothyroidism, at least in animal models.