Sodium is the sixth most abundant element in the Earth’s crust and salt (sodium chloride) makes up about 80% of the dissolved matter in seawater.

Sodium is the sixth most abundant element in the Earth’s crust and salt (sodium chloride) makes up about 80% of the dissolved matter in seawater. Although there is a wide variety of sodium salts, many of which are used as additives in food processing (e.g., sodium nitrate and monosodium glutamate), sodium chloride is the major source of sodium in foods. As sodium and chloride intakes in humans are so closely matched, both will be considered together in this text.

Salt was of major importance in early civilizations and in prehistory. Humans have special taste and salt appetite systems, which led to special culinary uses for salt and made it a much sought-after commodity. Nowadays, salt is still used widely to modify flavor, to alter the texture and consistency of food, and to control microbial growth (Table 9.5). 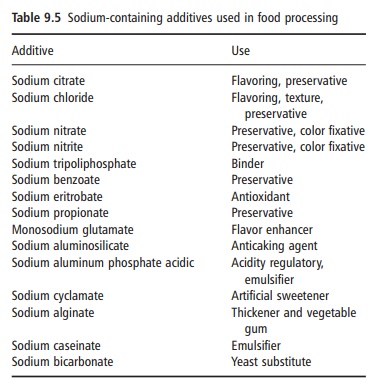 Excessive salt intakes are usually excreted efficiently in healthy individuals, whereas high plasma sodium and chloride are commonly caused by diabetes insipidus, brainstem injury, and dehydration through either excessive sweating or deficient water intake. Excessive salt intake may have roles in the degenerative diseases of coronary heart disease, stroke, gastric cancer, osteo-porosis, and bronchial hyperactivity. There are accumulating data from epidemiological studies and controlled clinical trials to indicate an adverse effect of sodium intake on blood pressure, and that most people are sodium sensitive. It now appears that low-ering this intermediate or surrogate measure (blood pressure) of disease can be translated into reduced morbidity and mortality of cardiovascular disease from long-term follow-up assessed 10–15 years after the original dietary sodium reduction trials. The mechanism linking salt intake with blood pressure is unclear but probably relates to sodium homeostasis. It has been suggested that extracellular sodium concentrations may adversely affect vascular reac-tivity and growth and stimulate myocordial fibrosis. Low-sodium diets differ in nutrient composition from the prevailing diet, and animal experimentation indicates that low potassium or calcium intake encourages a salt-induced increase in blood pres-sure, as does feeding simple carbohydrates (sucrose, glucose, or fructose). Copper deficiency in rats has been demonstrated to increase blood pressure independently of sodium intake. Epidemiological and other studies indicate that heavy metals, such as lead and mercury, may also contribute to increased blood pressure.

Efficient sodium conservation mechanisms mean that current sodium intakes in many populations are unnecessarily high and are probably much higher than the generally lower sodium diets eaten during the long period of human evolution. Clinical studies indicate that a high-sodium diet increases calcium excretion and measures of bone resorption, thereby suggesting a possible role for high salt intakes in osteoporosis.

Cross-cultural epidemiology suggests that high salt intakes are associated with gastric cancer, whereas a low-salt diet is regarded as having a potentially favor-able effect in asthma patients.

A number of rare genetic disorders have thrown some light on the pathological mechanisms linking sodium balance and hypertension (pathologically elevated blood pressure). A number of candidate genes have been identified in monogenic forms of low renin salt-sensitive hypertension. These encode for enzymes involved in aldosterone biosynthesis or cortisol metabolism and for the epithelial sodium channel. These genetic defects decrease the ability of the renal tubules to excrete sodium. It is possible that similar genetic mechanisms operate in more common forms of hypertension such as essential hypertension and especially salt-sensitive hypertension. Moreover, molecular mechanisms associated with renin–angio-tensin–aldosterone are central to the pathophysiology of this condition. Common essential hypertension, however, is complex and heterogeneous and has a genetic heritability of about 30%.

The tight regulation of plasma sodium and, in turn, chloride ensures that fluctuations in the plasma concentration of these ions are minimized and changes only occur in certain pathological circumstances. Measurements of plasma sodium, therefore, are of little consequence as far as nutri-tional status is concerned. Total body (excluding bone) sodium, however, is increased in malnutrition and trauma and this total exchangeable sodium can be measured, with some technical difficulty, using radioisotopes.

Salt intakes are notoriously difficult to measure, and urinary sodium excretion is considered to be a valid measure of sodium intake under circumstances where little sodium is lost in sweat. Sodium in urine is easily measured, but the collection of complete 24 h urinary samples is difficult because of subject com-pliance, and the completeness of these collections should be validated using a marker such as para-amino benzoic acid. Lithium (as carbonate) fused with sodium chloride can act as a reliable tracer to estimate discretionary salt (cooking and table) intakes.

Average requirements for sodium and chloride are estimated to be about 500 and 750 mg/day, respec-tively. Normal sodium (mostly from salt) intake varies from about 2 g/day to 14 g/day, with chloride (mostly from salt) intakes generally slightly in excess of sodium (Table 9.6). Snack and processed foods have more added salt than unprocessed foods. The amount of discretionary salt added in cooking or at the table appears to vary greatly among individuals and among countries. Discretionary salt intakes can vary from less than 10% to 20–30% of total salt intake and these figures emphasize the major effect of pro-cessed foods on total salt intakes in most populations (Table 9.7). 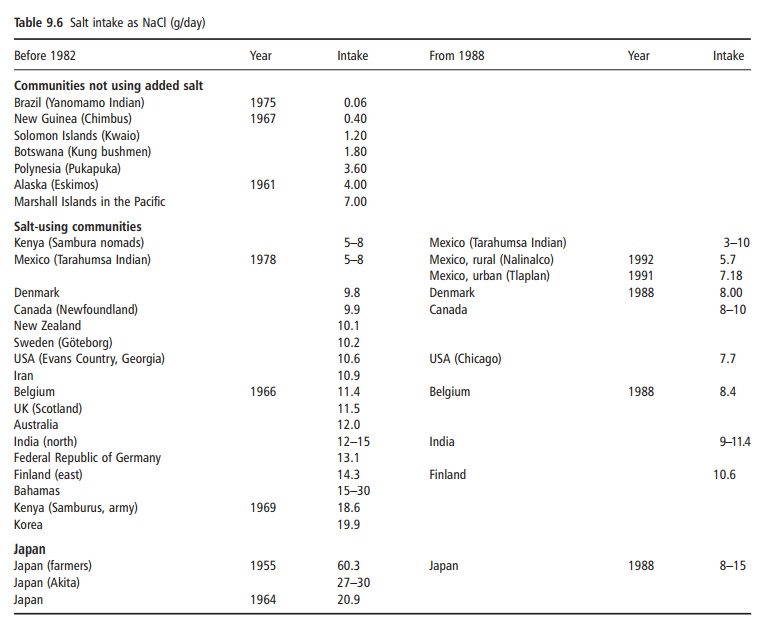 The major interactions between sodium (and chlo-ride) and other micronutrients are with respect to potassium and calcium. Data from animals (and some clinical studies) indicate that dietary potassium and calcium potentiate increases in blood pressure in salt-sensitive experimental models. There is evidence to suggest that the sodium to potassium ratio correlates more strongly with blood pressure than does either nutrient alone. As indicated previously, the metabo-lism of sodium, chloride, and potassium is closely related, and sodium and calcium ions have a close metabolic relationship within cells. 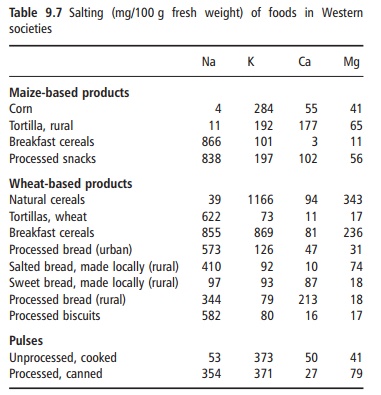