Unlike precipitation gravimetry, which is rarely used as a standard method of analysis, gravimetric methods based on volatilization reactions continue to play an important role in chemical analysis.

Unlike precipitation gravimetry, which is rarely used as a standard method of analy- sis, gravimetric methods based on volatilization reactions continue to play an im- portant role in chemical analysis. Several important examples are discussed in the following sections.

Determining the inorganic ash content of organic materials, such as polymers and paper, is an example of a direct volatilization gravimetric analysis. The sample is weighed, placed in an appropriate crucible, and the organic material is carefully removed by combustion. The crucible containing the residue is then heated to a constant weight using either a burner or an oven.

Another example of volatilization gravimetry is the determination of dissolved solids in water and wastewater. In this method a sample of the water is transferred to a weighed dish and dried to a constant weight at either 103–105 °C, or at 180 °C. Samples dried at the lower temperature retain some occluded water and lose some carbonate as CO2. The loss of organic material, however, is minimal. At the higher temperature, the residue is free from occluded water, but losses of carbonate are greater. In addition, some chloride, nitrate, and organic material are lost through thermal decomposition. The residue remaining after drying at either temperature can be ignited to constant weight at 500 °C. The loss in weight on ignition provides an indirect measure of the amount of volatile solids in the sample, and the weight of the remaining residue gives the amount of fixed solids.

Indirect analyses based on the weight of the residue remaining after volatiliza- tion are commonly used in determining moisture in a variety of products and in de- termining silica in water, wastewater, and rocks. Moisture is determined by drying a preweighed sample with an infrared lamp or in a low-temperature oven. The differ- ence between the original weight and the weight after drying equals the mass of water lost.

The determination of silicon is commonly encountered in metallurgical and mining laboratories responsible for the analysis of ores, slags, and alloys. The volatilization gravimetric method, which is appropriate for samples containing high concentrations of silicon, was described earlier in Method 8.2.

As a final example, the determination of carbon in steels and other metal alloys can be determined by heating the sample. The carbon is converted to CO2, which is collected in an appropriate absorbent trap, providing a direct measure of the amount of C in the original sample.

The most important application of volatilization gravimetry to the analysis of organic materials is an elemental analysis. When burned in a stream of pure O2, many elements, such as carbon and hydrogen, are released as gaseous combustion products, such as CO2 and H2O. The combustion products are passed through preweighed tubes containing appropriate absorbents. The increase in the mass of these tubes provides a direct indication of the mass percent of carbon and hydrogen in the organic material.

Volatilization gravimetry is also used to determine biomass in water and waste- water. Biomass is a water quality index, providing an indication of the total mass of organisms contained within a sample of water. A known volume of the sample is passed through a preweighed 0.45-μm membrane filter or a glass-fiber filter and dried at 105 °C for 24 h. The residue’s mass provides a direct measure of biomass. If samples are known to contain a substantial amount of dissolved inorganic solids, the residue can be ignited at 500 °C for 1 h, thereby removing all organic materials. The resulting residue is wetted with distilled water to rehydrate any clay minerals and dried to a constant weight at 105 °C. The difference in weight before and after ignition provides an indirect measure of biomass.

When needed, the relationship between the analyte and the analytical signal is given by the stoichiometry of any relevant reactions. Calcula- tions are simplified, however, by applying the principle of conservation of mass. The most frequently encountered example of a direct volatilization gravimetric analysis is the determination of a compound’s elemental composition. 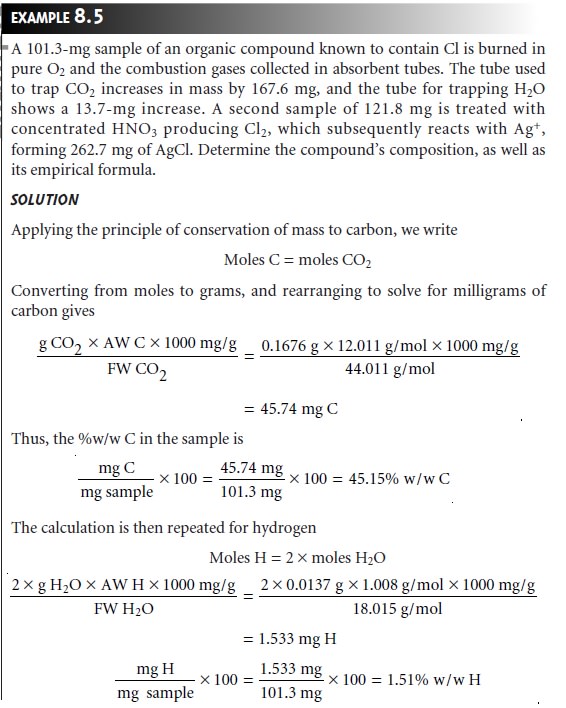 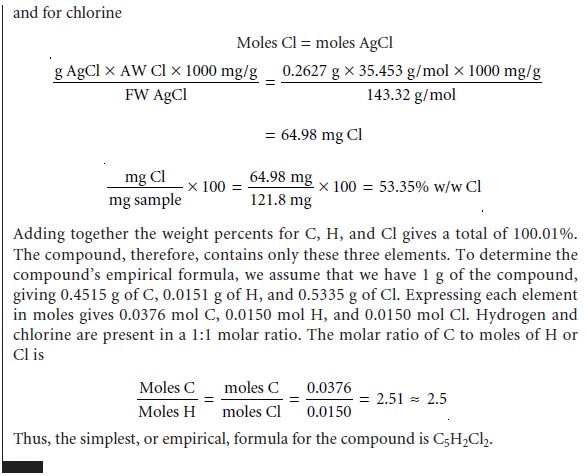 In an indirect volatilization gravimetric analysis, the change in the sample’s weight is proportional to the amount of analyte. Note that in the following example it is not necessary to apply the conservation of mass to relate the analytical signal to the analyte. 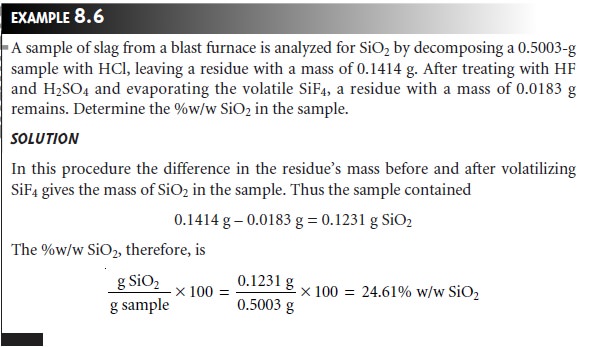 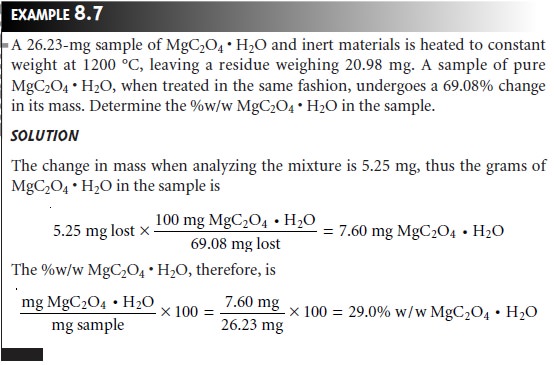