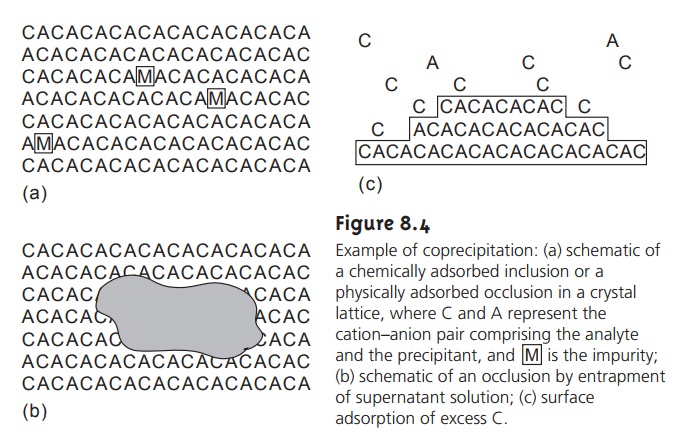 Occlusions, which are a second type of coprecipitated impurity, occur when physically adsorbed interfering ions become trapped within the growing precipitate.

Which are a second type of coprecipitated impurity, occur when physically adsorbed interfering ions become trapped within the growing precipitate. Occlusions form in two ways. The most common mechanism occurs when physically adsorbed ions are surrounded by additional precipitate before they can be desorbed or displaced (see Figure 8.4a). In this case the precipitate’s mass is always greater than expected. Occlusions also form when rapid precipitation traps a pocket of solution within the growing precipitate (Figure 8.4b). Since the trapped solution contains dis- solved solids, the precipitate’s mass normally increases. The mass of the precipitate may be less than expected, however, if the occluded material consists primarily of the analyte in a lower-molecular-weight form from that of the precipitate.

Occlusions are minimized by maintaining the precipitate in equilibrium with its supernatant solution for an extended time. This process is called digestion and may be carried out at room temperature or at an elevated temperature. During di- gestion, the dynamic nature of the solubility–precipitation equilibrium, in which the precipitate dissolves and re-forms, ensures that occluded material is eventually exposed to the supernatant solution. Since the rate of dissolution and reprecipita- tion are slow, the chance of forming new occlusions is minimal.

After precipitation is complete the surface continues to attract ions from solu- tion (Figure 8.4c). These surface adsorbates, which may be chemically or physically adsorbed, constitute a third type of coprecipitated impurity. Surface adsorption is minimized by decreasing the precipitate’s available surface area. One benefit of di- gestion is that it also increases the average size of precipitate particles. This is not surprising since the probability that a particle will dissolve is inversely proportional to its size. During digestion larger particles of precipitate increase in size at the ex- pense of smaller particles. One consequence of forming fewer particles of larger size is an overall decrease in the precipitate’s surface area. Surface adsorbates also may be removed by washing the precipitate. Potential solubility losses, however, cannot be ignored.

Inclusions, occlusions, and surface adsorbates are called coprecipitates because they represent soluble species that are brought into solid form along with the de- sired precipitate. Another source of impurities occurs when other species in solu- tion precipitate under the conditions of the analysis. Solution conditions necessary to minimize the solubility of a desired precipitate may lead to the formation of an additional precipitate that interferes in the analysis. For example, the precipitation of nickel dimethylgloxime requires a pH that is slightly basic. Under these condi- tions, however, any Fe3+ that might be present precipitates as Fe(OH)3. Finally, since most precipitants are not selective toward a single analyte, there is always a risk that the precipitant will react, sequentially, with more than one species.

The formation of these additional precipitates can usually be minimized by carefully controlling solution conditions. Interferents forming precipitates that are less soluble than the analyte may be precipitated and removed by filtration, leaving the analyte behind in solution. Alternatively, either the analyte or the interferent can be masked using a suitable complexing agent, preventing its precipitation.

Both of the above-mentioned approaches are illustrated in Fresenius’s analyti- cal method for determining Ni and Co in ores containing Pb2+, Cu2+, and Fe3+ as potential interfering ions. The ore is dissolved in a so- lution containing H2SO4, selectively precipitating Pb2+ as PbSO4. After filtering, the supernatant solution is treated with H2S. Because the solution is strongly acidic, however, only CuS precipitates. After removing the CuS by filtration, the solution is made basic with ammonia until Fe(OH)3 precipitates. Cobalt and nickel, which form soluble amine complexes, remain in solution.

In some situations the rate at which a precipitate forms can be used to separate an analyte from a potential interferent. For example, due to similarities in their chemistry, a gravimetric analysis for Ca2+ may be adversely affected by the presence of Mg2+. Precipitates of Ca(OH)2, however, form more rapidly than precipitates of Mg(OH)2. If Ca(OH)2 is filtered before Mg(OH)2 begins to precipitate, then a quantitative analysis for Ca2+ is feasible.

and between MgCO3 and MgO

provide enough additional information to determine the amounts of both Ca2+ and Mg2+ in the sample.*