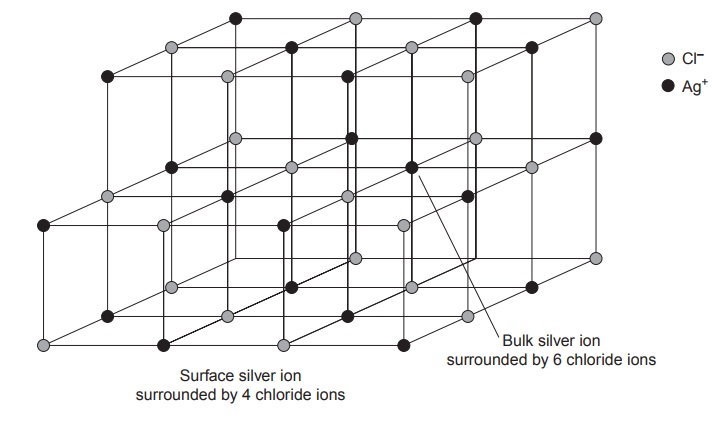 Precipitation gravimetry is based on a known stoichiometry between the analyte’s mass and the mass of a precipitate.

Precipitation gravimetry is based on a known stoichiometry between the analyte’s mass and the mass of a precipitate. It follows, therefore, that the precipitate must be free from impurities. Since precipitation typically occurs in a solution rich in dissolved solids, the initial precipitate is often impure. Any impu- rities present in the precipitate’s matrix must be removed before obtaining its weight.

The greatest source of impurities results from chemical and physical interac- tions occurring at the precipitate’s surface. A precipitate is generally crystalline, even if only on a microscopic scale, with a well-defined lattice structure of cations and anions. Those cations and anions at the surface of the precipitate carry, respec- tively, a positive or a negative charge as a result of their incomplete coordination spheres. In a precipitate of AgCl, for example, each Ag+ ion in the bulk of the pre- cipitate is bound to six Cl– ions. Silver ions at the surface, however, are bound to no more than five Cl– ions, and carry a partial positive charge (Figure 8.3). 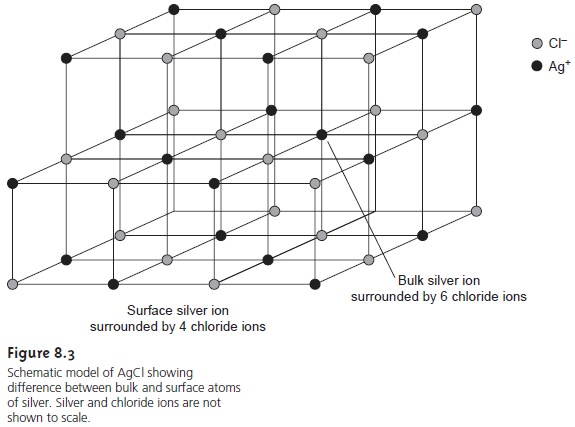 One common type of impurity is an inclusion. Potential interfering ions whose size and charge are similar to a lattice ion may substitute into the lattice structure by chemical adsorption, provided that the interferent precipitates with the same crystal structure (Figure 8.4a). The probability of forming an inclusion is greatest when the interfering ion is present at substantially higher concentrations than the dissolved lattice ion. The presence of an inclusion does not decrease the amount of analyte that precipitates, provided that the precipitant is added in sufficient excess. Thus, the precipitate’s mass is always larger than expected.

Inclusions are difficult to remove since the included material is chemically part of the crystal lattice. The only way to remove included material is through reprecip- itation. After isolating the precipitate from the supernatant solution, it is dissolved in a small portion of a suitable solvent at an elevated temperature. The solution is then cooled to re-form the precipitate. Since the concentration ratio of interferent to analyte is lower in the new solution than in the original supernatant solution, the mass percent of included material in the precipitate decreases. This process of re- precipitation is repeated as needed to completely remove the inclusion. Potential solubility losses of the analyte, however, cannot be ignored. Thus, reprecipitation requires a precipitate of low solubility, and a solvent for which there is a significant difference in the precipitate’s solubility as a function of temperature.