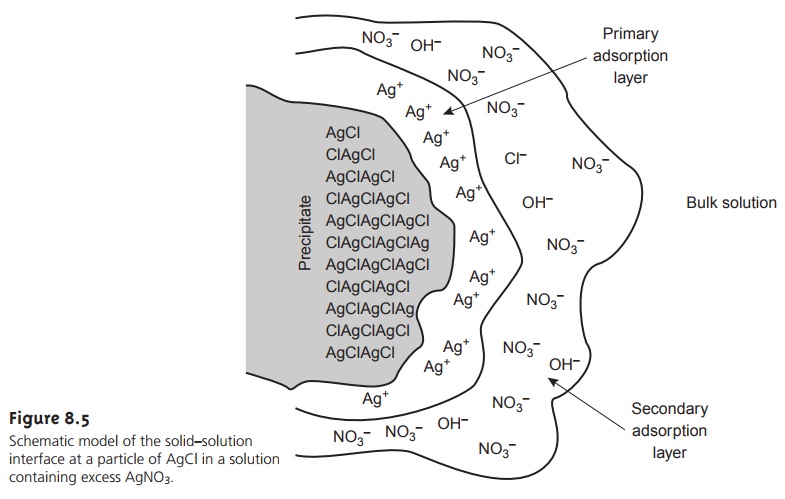 Following precipitation and digestion, the precipitate must be separated from the supernatant solution and freed of any remaining impu- rities, including residual solvent.

Following precipitation and digestion, the precipitate must be separated from the supernatant solution and freed of any remaining impu- rities, including residual solvent. These tasks are accomplished by filtering, rinsing, and drying the precipitate. The size of the precipitate’s particles determines the ease and success of filtration. Smaller, colloidal particles are difficult to filter because they may readily pass through the pores of the filtering device. Large, crystalline particles, however, are easily filtered.

By carefully controlling the precipitation reaction we can significantly increase a precipitate’s average particle size. Precipitation consists of two distinct events: nu- cleation, or the initial formation of smaller stable particles of precipitate, and the subsequent growth of these particles. Larger particles form when the rate of particle growth exceeds the rate of nucleation.

where Q is the solute’s actual concentration, S is the solute’s expected concentra- tion at equilibrium, and Q – S is a measure of the solute’s supersaturation when precipitation begins. A large, positive value of RSS indicates that a solution is highly supersaturated. Such solutions are unstable and show high rates of nucle- ation, producing a precipitate consisting of numerous small particles. When RSS is small, precipitation is more likely to occur by particle growth than by nucleation.

There are, however, practical limitations to minimizing RSS. Precipitates that are extremely insoluble, such as Fe(OH)3 and PbS, have such small solubilities that a large RSS cannot be avoided. Such solutes inevitably form small particles. In addi- tion, conditions that yield a small RSS may lead to a relatively stable supersaturated solution that requires a long time to fully precipitate. For example, almost a month is required to form a visible precipitate of BaSO4 under conditions in which the ini- tial RSS is 5.

An increase in the time required to form a visible precipitate under conditions of low RSS is a consequence of both a slow rate of nucleation and a steady decrease in RSS as the precipitate forms. One solution to the latter problem is to chemically generate the precipitant in solution as the product of a slow chemical reaction. This maintains the RSS at an effectively constant level. The precipitate initially forms under conditions of low RSS, leading to the nucleation of a limited number of parti- cles. As additional precipitant is created, nucleation is eventually superseded by par- ticle growth. This process is called homogeneous precipitation.

Two general methods are used for homogeneous precipitation. If the precipi- tate’s solubility is pH dependent, then the analyte and precipitant can be mixed under conditions in which precipitation does not occur. The pH is then raised or lowered as needed by chemically generating OH– or H3O+. For example, the hydrol- ysis of urea can be used as a source of OH–.

The hydrolysis of urea is strongly temperature-dependent, with the rate being negli- gible at room temperature. The rate of hydrolysis, and thus the rate of precipitate formation, can be controlled by adjusting the solution’s temperature. Precipitates of BaCrO4, for example, have been produced in this manner.

In the second method of homogeneous precipitation, the precipitant itself is generated by a chemical reaction. For example, Ba2+ can be homogeneously precipi- tated as BaSO4 by hydrolyzing sulphamic acid to produce SO42–.

Homogeneous precipitation affords the dual advantages of producing large particles of precipitate that are relatively free from impurities. These advantages, however, may be offset by increasing the time needed to produce the precipitate, and a tendency for the precipitate to deposit as a thin film on the container’s walls. The latter problem is particularly severe for hydroxide precipitates generated using urea. 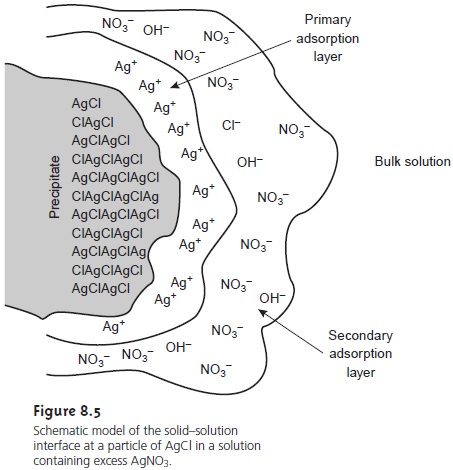 Heating the solution and precipitate provides a second way to induce coagula- tion. As the temperature increases, the number of ions in the primary adsorption layer decreases, lowering the precipitate’s surface charge. In addition, increasing the particle’s kinetic energy may be sufficient to overcome the electrostatic repulsion preventing coagulation at lower temperatures.