Particulate gravimetry is commonly encountered in the environmental analysis of water, air, and soil samples.

Particulate gravimetry is commonly encountered in the environmental analysis of water, air, and soil samples. The analysis for suspended solids in water samples, for example, is accomplished by filtering an appropriate volume of a well-mixed sample through a glass fiber filter and drying the filter to constant weight at 103–105 °C.

Microbiological testing of water also is accomplished by particulate gravimetry. For example, in the analysis for coliform bacteria an appropriate volume of sample is passed through a sterilized 0.45-μm membrane filter. The filter is then placed on a sterilized absorbent pad saturated with a culturing medium and incubated for 22–24 h at 35 ±0.5 °C. Coliform bacteria are identified by the presence of individual bacterial colonies that form during the incubation period. As with qualitative appli- cations of precipitation gravimetry, the signal in this case is a visual observation rather than a measurement of mass.

Grain size distributions for sediments and soils are used to determine the amount of sand, silt, and clay present in a sample. For example, a grain size of 2 mm serves as a boundary between gravel and sand. Grain size boundaries for sand–silt and silt–clay are given as 1/16 mm and 1/256 mm, respectively.

Several standard methods for the quantitative analysis of food samples are based on measuring the sample’s mass following a selective solvent extraction. For example, the crude fat content in chocolate can be determined by extracting with ether for 16 h in a Soxhlet extractor. After the extraction is complete, the ether is al- lowed to evaporate, and the residue is weighed after drying at 100 °C. This analysis has also been accomplished indirectly by weighing a sample before and after ex- tracting with supercritical CO2.

Quartz crystal microbalances equipped with thin-film polymer or chemical coatings have found numerous quantitative applications in environmental analysis. Methods have been reported for the analysis of a variety of gaseous pollutants, in- cluding ammonia, hydrogen sulfide, ozone, sulfur dioxide, and mercury. Bio- chemical particulate gravimetric sensors also have been developed. For example, a piezoelectric immunosensor has been developed that shows a high selectivity for human serum albumin and is capable of detecting microgram quantities.

The result of a quantitative analysis by particulate gravimetry is just the ratio, using appropriate units, of the amount of analyte to the amount of sample. 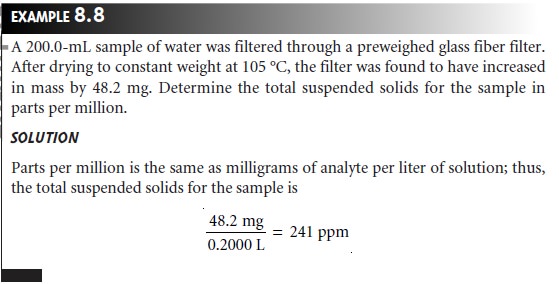