Although not in common use, precipitation gravimetry still provides a reliable means for assessing the accuracy of other methods of analysis or for verifying the composition of standard reference materials.

The most important precipitants for inorganic cations are chromate, the halides, hydroxide, oxalate, sulfate, sulfide, and phosphate. A sum- mary of selected methods, grouped by precipitant, is shown in Table 8.1. Many in- organic anions can be determined using the same reactions by reversing the analyte and precipitant. 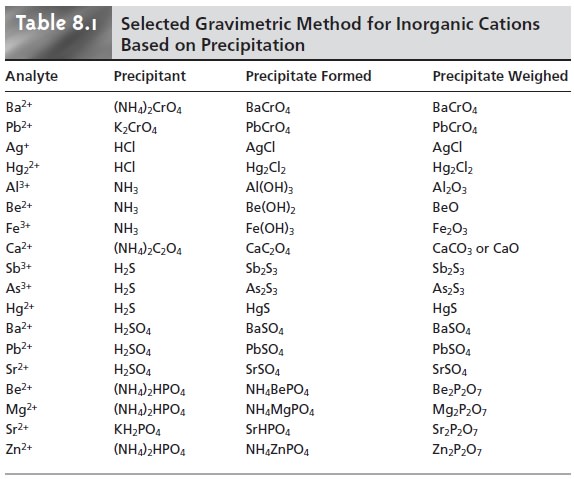 For example, chromate can be determined by adding BaCl2 and precipitating BaCrO4. Methods for other selected inorganic anions are summarized in Table 8.2. Methods for the homogeneous generation of precipitants are shown in Table 8.3. 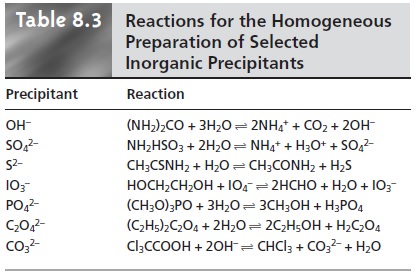 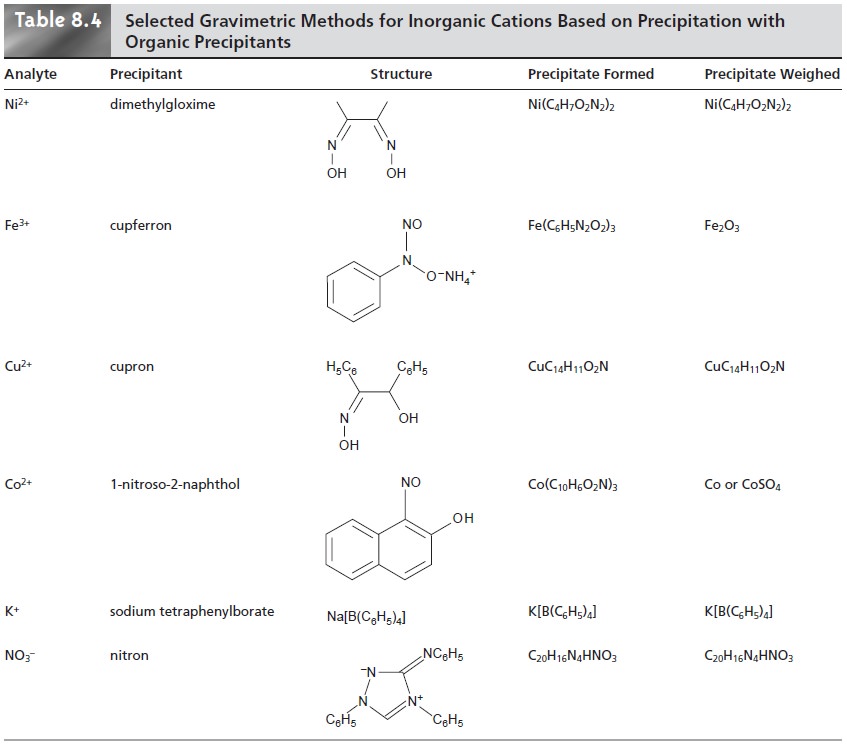 Precipitation gravimetry continues to be listed as a standard method for the analysis of Mg2+ and SO42– in water and wastewater analysis. A description of the procedure for Mg2+ was discussed earlier in Method 8.1. Sulfate is analyzed by pre- cipitating BaSO4, using BaCl2 as the precipitant.

Precipitation is carried out in an acidic solution (acidified to pH 4.5–5.0 with HCl) to prevent the possible precipita- tion of BaCO3 or Ba3(PO4)2 and performed near the solution’s boiling point. The precipitate is digested at 80–90 °C for at least 2 h. Ashless filter paper pulp is added to the precipitate to aid in filtration. After filtering, the precipitate is ignited to con- stant weight at 800 °C. Alternatively, the precipitate can be filtered through a fine- porosity fritted glass crucible (without adding filter paper pulp) and dried to con- stant weight at 105 °C. This procedure is subject to a variety of errors, including occlusions of Ba(NO3)2, BaCl2, and alkali sulfates.

Several organic functional groups or heteroatoms can be deter- mined using gravimetric precipitation methods; examples are outlined in Table 8.5. Note that the procedures for the alkoxy and alkimide functional groups are exam- ples of indirect analyses. 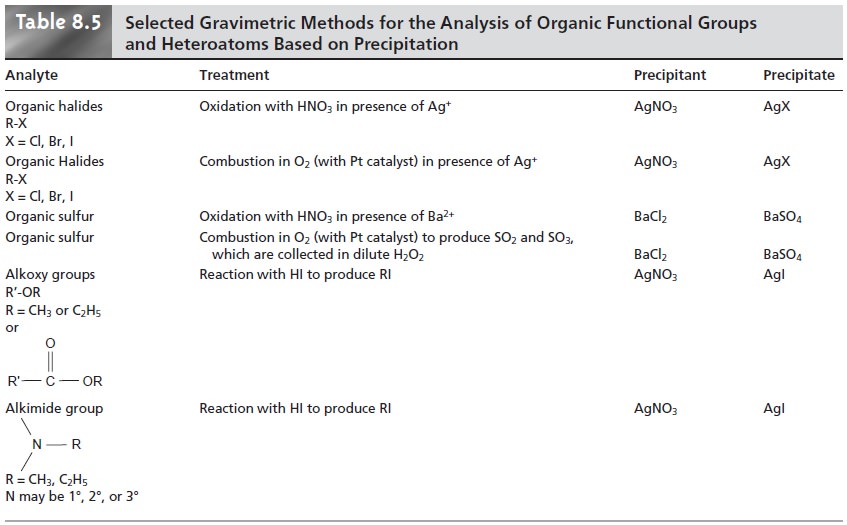 In precipitation gravimetry the relationship between the analyte and the precipitate is determined by the stoichiometry of the relevant reactions. As discussed, gravimetric calculations can be simplified by applying the principle of conservation of mass. The following example demonstrates the application of this approach to the direct analysis of a single analyte. 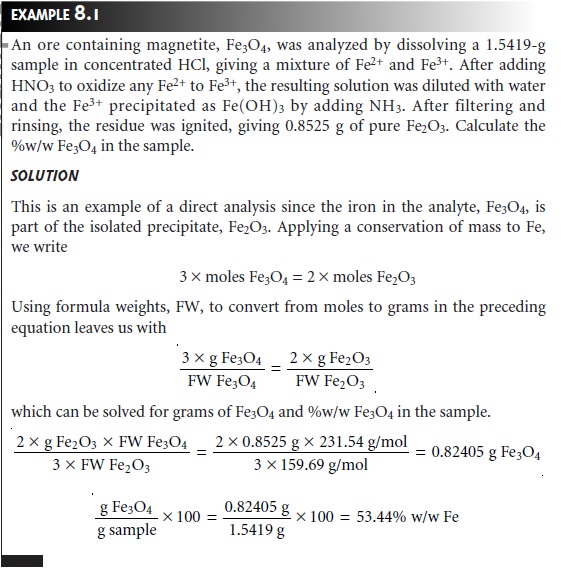 As discussed earlier, the simultaneous analysis of samples containing two analytes requires the isolation of two precipitates. As shown in Example 8.2, conservation of mass can be used to write separate stoichiometric equations for each precipitate. These equations can then be solved simultaneously for both analytes. 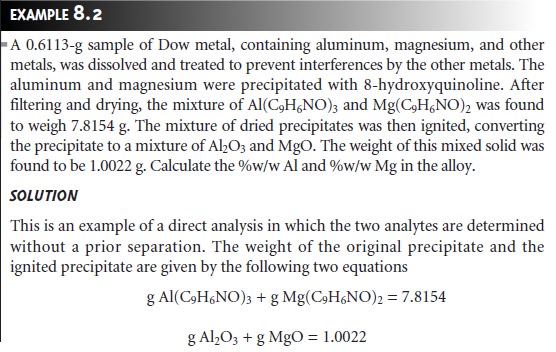 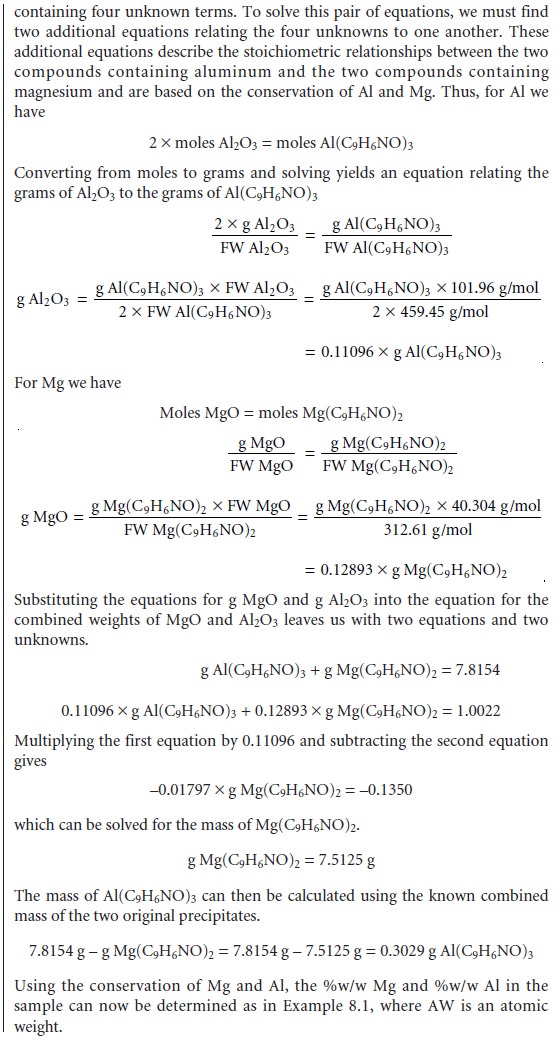 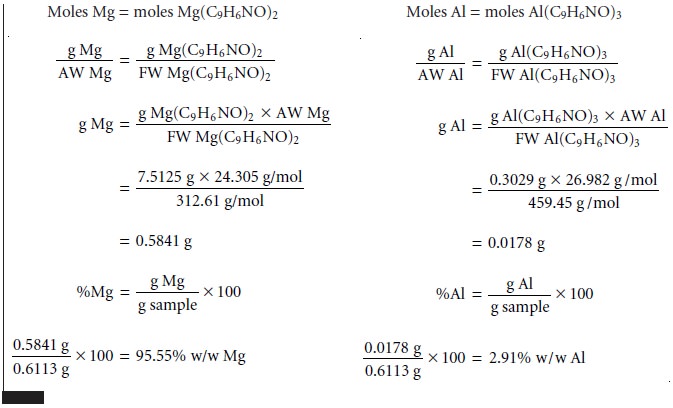 In an indirect analysis the precipitate does not contain the analyte, but is the product of a reaction involving the analyte. Despite the additional complexity, a stoichiometric relationship between the analyte and the precipitate can be written by applying the conservation principles discussed. 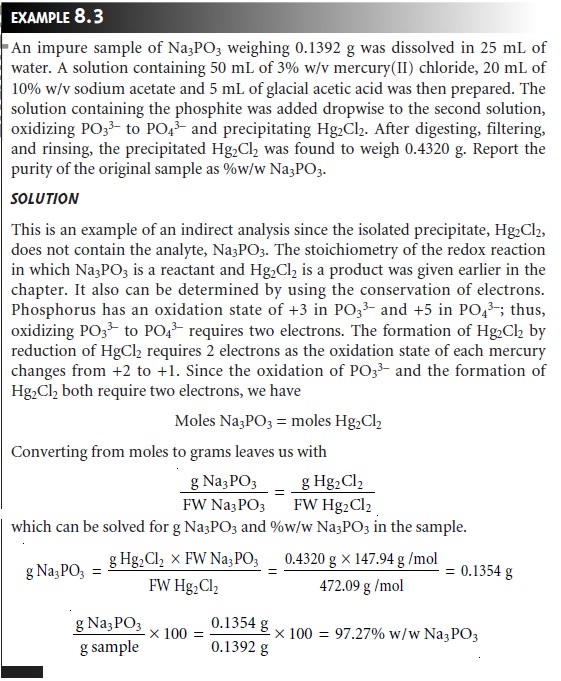