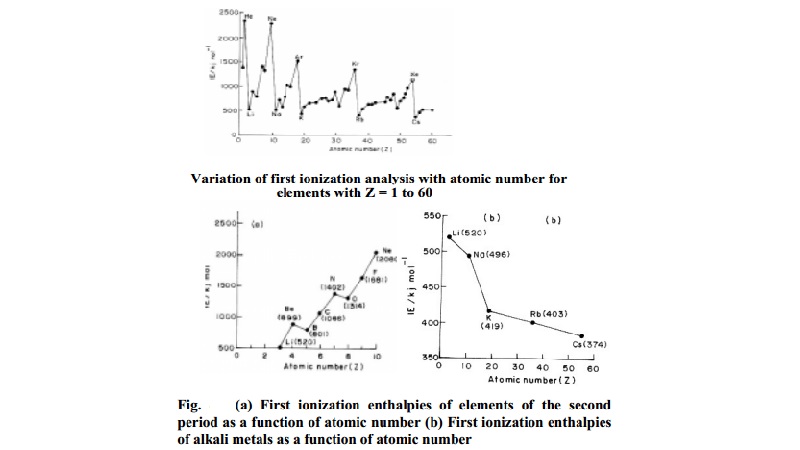 Ionization enthalpy is also called ionization potential because it is measured as the amount of potential required to remove the most loosely held electron from the gaseous atom. It is expressed in terms of either kJ/mol or electron Volts/atom.

If a second electron is to be removed from the same element the energy required will be higher than that required for removal of the first electron because it is more difficult to remove an electron from a positively charged species than from a neutral atom. 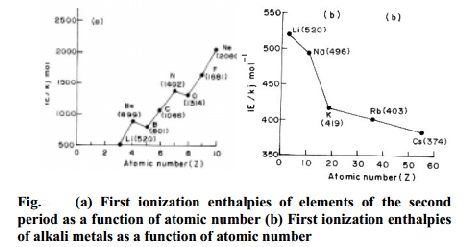 It is seen from the Fig. that the ionization enthalpy of an element depends on its electronic configuration. Ionization potentials of noble gases are found to be maximum and those of alkali metals are found to minimum. The high values of noble gases are due to completely filled electronic configurations in their outermost shells and the low values of alkali metals are due to their large size and a single electron in the outermost shell.

The ionization potentials increases from left to right in a period. This trend can be explained in terms of increase in nuclear charge and decrease in size from left to right in a period. Generally the first ionization enthalpy decreases down a group in the periodic table. As we move down the group, the outer electrons, which are to be removed, are farther from the nucleus and there is an increasing screening of the nuclear charge by the electrons in the inner shells. Consequently the removal of electrons becomes easier down the group.

The ionization enthalpy of an atom depends on the following factors.

(ii) Charge on the nucleus

Ionization enthalpy increases with increase in nuclear charge because of the increase in the attractive force between the nucleus and the electron.

The penetration power of the electrons in various orbitals decreases in a given shell (same value of n) in the order: s>p>d>f. Since the penetration power of s-electron towards the nucleus is more, it will be closer to the nucleus and will be held firmly. Thus, for the same shell, the ionization enthalpy would be more to remove the s-electrons in comparison with the p-electron which in turn would be more than that for d-electron and so on.

If an atom has half-filled or completely filled sub-levels, its ionization enthalpy is higher than that expected normally from its position in the periodic table. This is because such atom, have extra stability and hence it is difficult to remove electrons from these stable configurations.