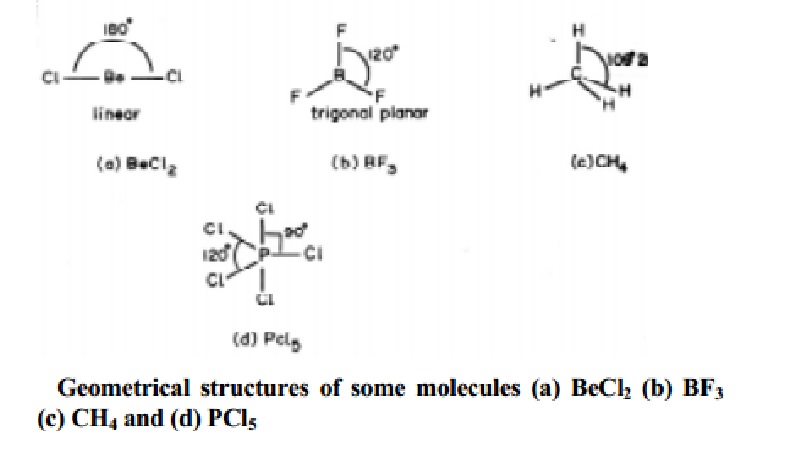 Some of the common geometrical shapes found among the molecules are: linear, trigonal, planar, tetrahedral, square planar, trigonal bipyramidal, square pyramidal, octahedral, pentagonal-bipyramidal etc. The VSEPR theory provides a simple treatment for predicting the shapes of polyatomic molecules. The theory was originally proposed by Sigdwick and Powell in 1940. It was further developed and modified by Nyholm and Gillespie (1957).

The basic assumptions of the VSEPR theory are that:

ii.            These pairs of electrons tend to occupy positions in space that minimize repulsions and maximise the distance of separation between them.

iii.            The valence shell is taken as a sphere with electron pairs localising on the spherical surface at maximum distance from one another.

v.            Where two or more resonance structures can depict a molecule the VSEPR model is applicable to any such structure.

Table shows the different geometries of molecules or ions with central atom having no lone pair of electrons and represented by general type ABx. In compounds of AB2, AB3, AB4, AB5, AB6, types the arrangement of electron pairs (bonded pairs) as well as the B atoms around the central atom A are, linear, trigonal planar, tetrahedral, trigonal-bipyramidal and octahedral respectively. Such arrangements are present in BeCl2 (AB2); BF3 (AB3); CH4 (AB4) and PCl5 (AB5) molecules with geometries as shown below in Fig.. 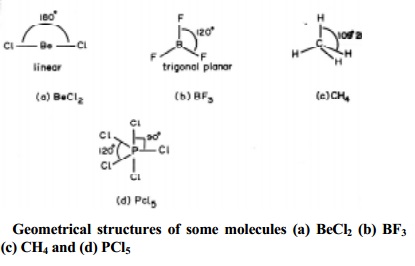 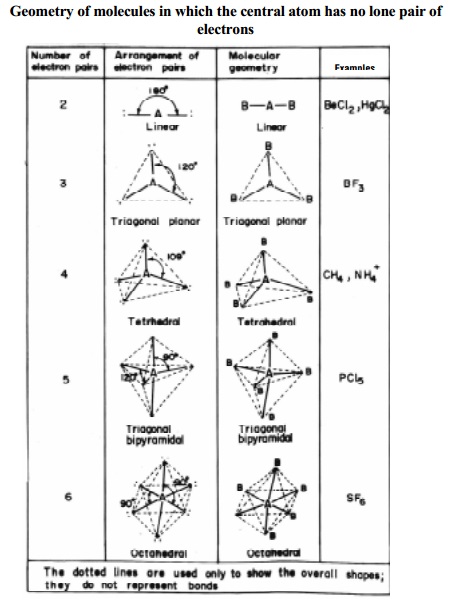 The descending order of repulsion interaction is

These repulsion effects cause deviations from idealised shapes and alterations in the predicted bond angles in molecules. 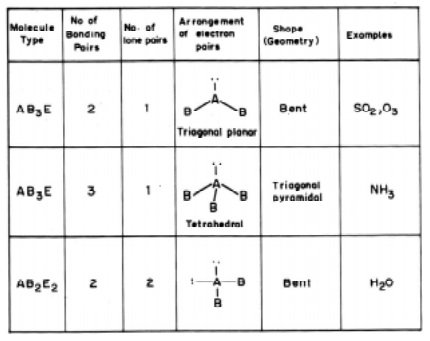 Examples : In sulphur dioxide molecule there are three electron pairs on the S atom. The overall arrangement is trigonal planar. However, because one of the three electron pairs is a lone pair, the SO2 molecule has a `bent' shape and due to the lp - lp repulsive interactions the bond angle is reduced to 119.5 from the value of 120 deg.

In the ammonia (NH3) molecule, there are three bonding pairs and one lone pair of electrons. The overall arrangement of four electron pairs is tetrahedral. In NH3, one of the electron pairs, on nitrogen atom is a lone pair, so the geometry of NH3 is pyramidal (with the N atom at the apex of the pyramid). The three N-H bonding pairs are pushed closer because of the lp-bp repulsion and the HNH angle gets reduced from 109O28' (which is the tetrahedral angle) to 107 O.

The water H2O molecule, oxygen atom contains two bonding pairs and two lone pairs of electrons. The overall arrangement for four electron pairs is tetrahedral, but the lp - lp repulsions being greater than lp-bp repulsions in H2O. The HOH angle is reduced to 104.5 O than 109 O 28'. The molecule has a bent shape.

The molecule SF6 belongs to AB6 type consisting of 6 bp of electrons around the central sulphur atom. The geometrical arrangement will be a regular octahedral.