Once described as the “spinal of the arm,” a supra-clavicular block offers dense anesthesia of the brachial plexus for surgical procedures at or dis-tal to the elbow.

Once described as the “spinal of the arm,” a supra-clavicular block offers dense anesthesia of the brachial plexus for surgical procedures at or dis-tal to the elbow (Figure 46–13). Historically, the supraclavicular block fell out of favor due to the high incidence of complications (namely, pneumo-thorax) that occurred with paresthesia and nerve stimulator techniques. It has seen a resurgence in recent years as the use of ultrasound guidance has theoretically improved safety. The supraclavicu-lar block does not reliably anesthetize the axillary and suprascapular nerves, and thus is not ideal for shoulder surgery. Sparing of distal branches, par-ticularly the ulnar nerve, may occur. Supraclavicu-lar perineural catheters provide inferior analgesia compared with infraclavicular infusion and are often displaced due to a lack of muscle mass to aid catheter retention. 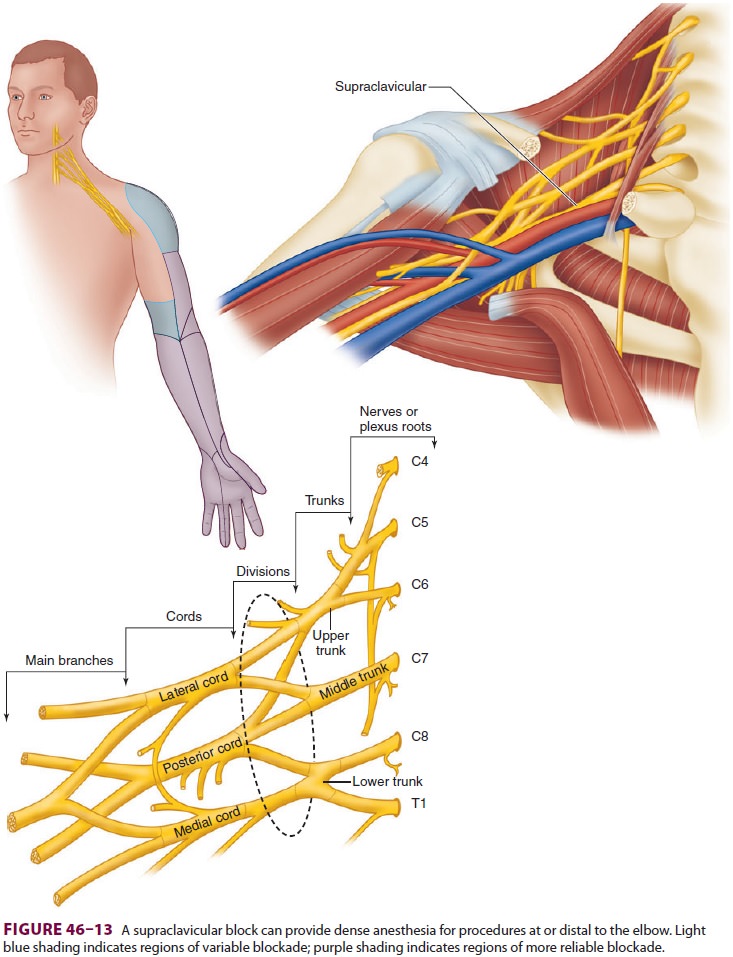 Many of the same precautions that are taken with patient selection for an interscalene block should be exercised with a supraclavicular block. Nearly half of patients undergoing supraclavicu-lar block will experience ipsilateral phrenic nerve palsy, although this incidence may be decreased by using ultrasound guidance, allowing use of a mini-mal volume of local anesthetic. Horner’s syndrome and recurrent laryngeal nerve palsy may also occur. Pneumothorax and subclavian artery puncture, although theoretically less likely under ultrasound guidance, remain potential risks.

The patient should be supine with the head turned 30o toward the contralateral side. A linear, high-frequency transducer is placed in the supraclavicu-lar fossa superior to the clavicle and angled slightly toward the thorax (Figure 46–14). The subclavian artery should be easily identified. The brachial plexus appears as multiple hypoechoic disks just superficial and lateral to the subclavian artery (Figure 46–15). The first rib should also be identified as a hyperechoic line just deep to the artery. Pleura may be identified adjacent to the rib, and can be distinguished from bone by its movement with breathing.

For an out-of-plane technique, a short, 22-gauge blunt-tipped needle is used. The skin is anesthe-tized, and the needle inserted just cephalad to the ultrasound transducer in a posterior and caudad 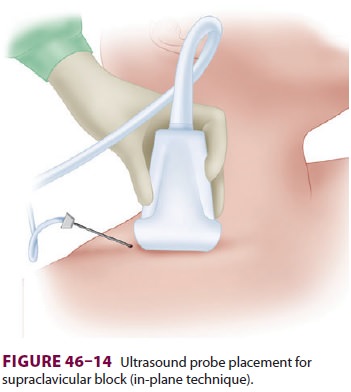 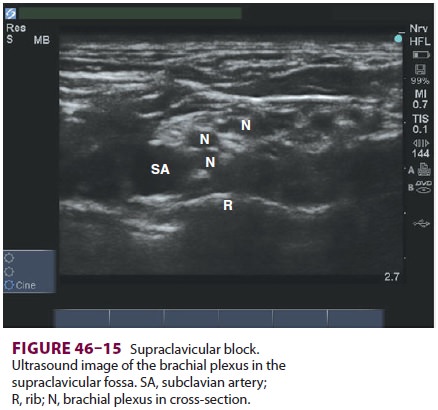 For an in-plane technique, a longer needle may be necessary. The needle is inserted lateral to the transducer in a direction parallel to the ultrasound beam. The needle is advanced medially toward the subclavian artery until the tip is visualized near the brachial plexus just lateral and superficial to the artery. Local anesthetic spread should be visualized surrounding the plexus after careful aspiration and incremental injection, which often requires injec-tions in multiple locations and a highly variable vol-ume (20–30 mL).