Brachial plexus block at the level of the cords provides excellent anesthesia for procedures at or distal to the elbow.

Brachial plexus block at the level of the cords provides excellent anesthesia for procedures at or distal to the elbow ( Figure 46–16). The upper arm and shoulder are not anesthetized with this approach. As with other brachial plexus blocks, the intercostobrachial nerve (T2 derma-tome) is spared. Site-specific risks of the infracla-vicular approach include vascular puncture and pneumothorax (although less common than with supraclavicular block). It is often prudent to avoid this approach in patients with vascular catheters in the subclavian region, or patients with an ipsilat-eral pacemaker. 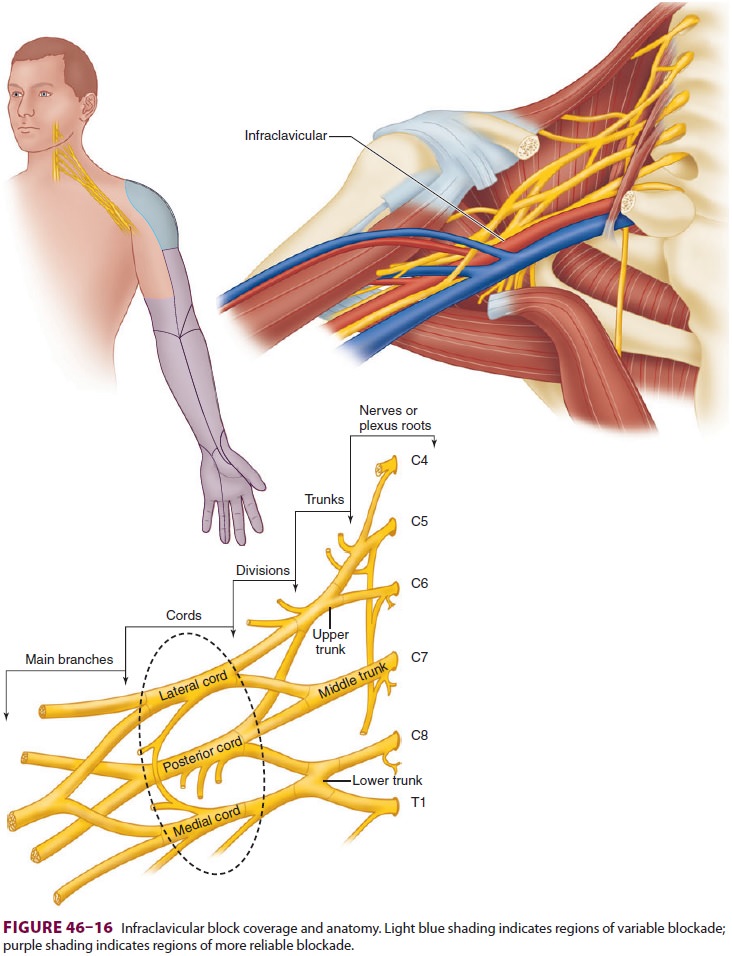 As the brachial plexus traverses beyond the first rib and into the axilla, the cords are arranged around the axillary artery according to their anatomic posi-tion: medial, lateral, and posterior.

The patient is positioned supine with the head turned to the contralateral side, and the coracoid process is identified (a bony prominence of the scapula that can be palpated between the acromioclavicular joint and the deltopectoral groove). The subclavian artery and brachial plexus run deep to the cora-coid process and can be found approximately 2 cm medial and 2 cm caudad to it, about 4–5 cm deep in the average patient ( Figure 46–17). A relatively long (8 cm) insulated needle is placed perpendicu-lar to the skin and advanced directly posterior until a motor response is elicited. An acceptable motor response is finger flexion or extension at a current less than 0.5 mA, but not elbow flexion/extension.

With the patient in the supine position, a small curvilinear transducer is placed in the parasag-ittal plane over the point 2 cm medial and 2 cm caudad to the coracoid process (Figure 46–18A). (Abducting the arm 90 o improves axillary artery imaging.) A high-frequency linear transducer will often provide inadequate needle visualization due to the relatively acute needle-to-transducer angle. The axillary artery and vein are identified in cross-section (Figure 46–18B). The medial, lateral, and posterior cords appear as hyperechoic bundles posi-tioned caudad, cephalad, and posterior to the artery, respectively. A relatively long needle is inserted 2–3 cm cephalad to the transducer. Optimal needle positioning is between the axillary artery and the posterior cord. Three randomized, controlled trials have demonstrated equivalent results with a single 30-mL injection adjacent to the posterior cord or divided among each of the cords. Insertion of a perineural catheter should always be in the same location posterior to the axillary artery, and infra-clavicular infusion has been shown to provide supe-rior analgesia to both supraclavicular and axillary catheters. 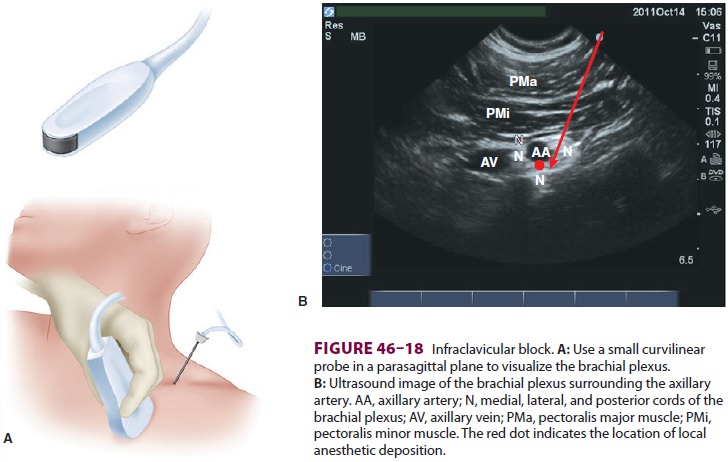