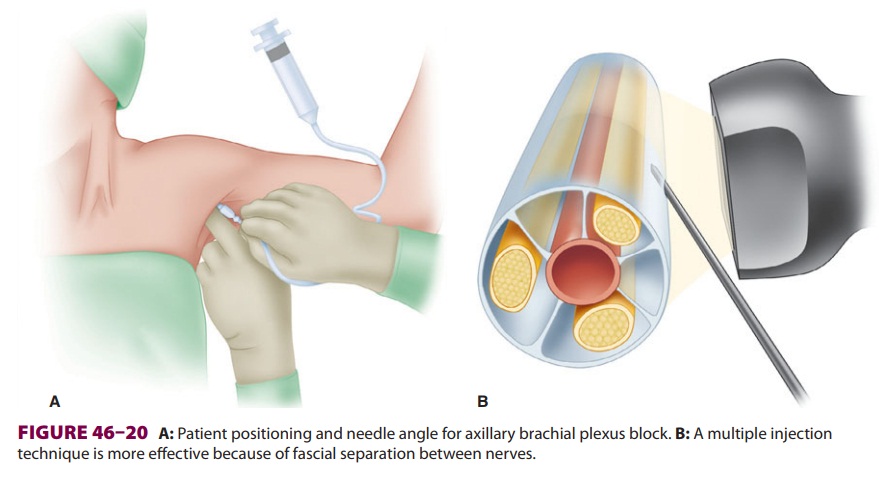 At the lateral border of the pectoralis minor muscle, the cords of the brachial plexus form large terminal branches.

At the lateral border of the pectoralis minor muscle, the cords of the brachial plexus form large terminalbranches. The axillary, musculocutaneous, and medial brachial cutaneous nerves branchfrom the brachial plexus proximal to the location in which local anesthetic is deposited during an axil-lary nerve block, and thus are usually spared (Figure 46–19). At this level, the major terminal nerves often are separated by fascia; therefore mul-tiple injections (10-mL each) may be required to reliably produce anesthesia of the entire arm distal to the elbow (Figure 46–20).

There are few contraindications to axillary bra-chial plexus blocks. Local infection, neuropathy, and bleeding risk must be considered. Because the axilla is highly vascularized, there is a risk of local anes-thetic uptake through small veins traumatized by needle placement. The axilla is also a suboptimal site for perineural catheter placement because of greatly inferior analgesia versus an infraclavicular infusion, as well as theoretically increased risks of infection and catheter dislodgement.

All of the numerous axillary block techniques require the patient to be positioned supine, with the arm abducted 90 o and the head turned toward the contralateral side (Figure 46–20). The axillary artery pulse should be palpated and its location marked as a reference point. 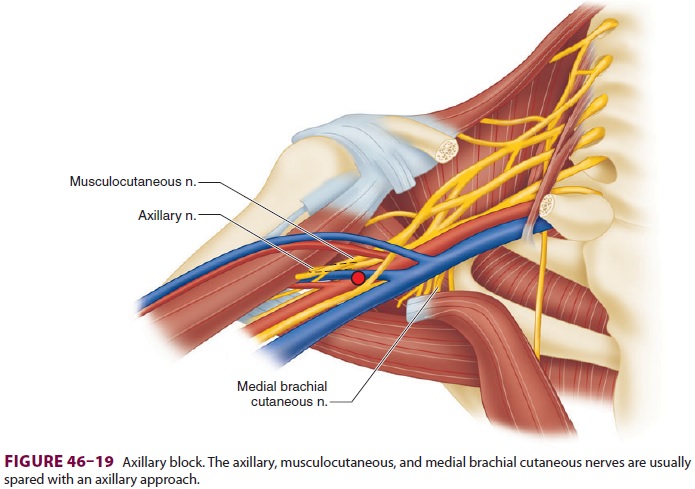 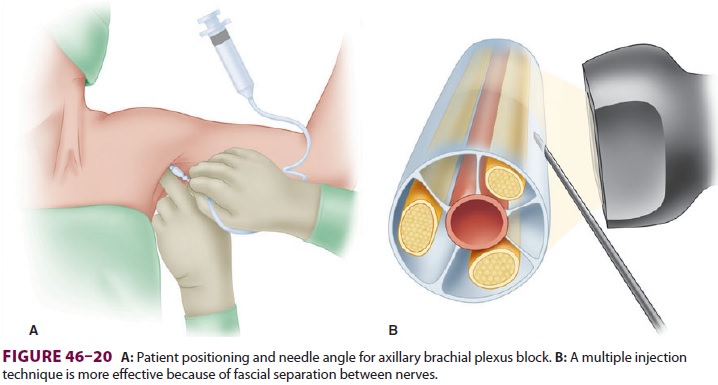 This technique has fallen out of favor due to the trauma of twice purposefully penetrating the axil-lary artery along with a theoretically increased risk of inadvertent intravascular local anesthetic injec-tion. The nondominant hand is used to palpate and immobilize the axillary artery, and a 22-gauge needle is inserted high in the axilla (Figure 46–20) until bright red blood is aspirated. The needle is then slightly advanced until blood aspiration ceases. Injection can be performed posteriorly, anteriorly, or in both locations in relation to the artery. A total of 30–40 mL of local anesthetic is typically used.

Again the nondominant hand is used to palpate and immobilize the axillary artery. With the arm abducted and externally rotated, the terminal nerves usually lie in the following positions relative to the artery (Figure 46–21, although variations are common): median nerve superior (wrist flexion, thumb opposition, forearm pronation); ulnar nerve inferior (wrist flexion, thumb adduction, fourth/ fifth digit flexion); and radial nerve inferior–poste-rior (digit/wrist/elbow extension, forearm supina-tion). The musculocutaneous nerve (elbow flexion) is separate and deep within the coracobrachialis muscle, which is more superior (lateral) in this posi-tion and, as a consequence, is often not blocked with this procedure (Figure 46–21). A 2-in., 22-gauge insulated needle is inserted proximal to the palpat-ing fingers to elicit muscle twitches in the hand. Once an acceptable muscle response is identified, and after reducing the stimulation to less than 0.5 mA, careful aspiration is performed and local anes-thetic is injected. Although a single injection of 40 mL may be used, greater success will be seen with multiple nerve stimulations (ie, two or three nerves) and divided doses of local anesthetic. 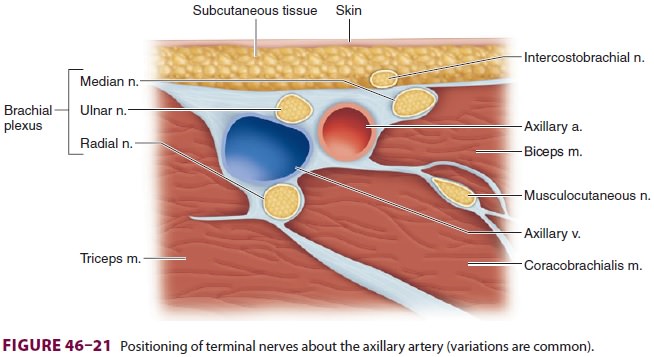 Using a high-frequency linear array ultrasound transducer, the axillary artery and vein are visual-ized in cross-section. The brachial plexus can be identified surrounding the artery (Figure 46–22). The needle is inserted superior (lateral) to the trans-ducer and advanced inferiorly (medially) toward the plexus under direct visualization. Ten milliliters of local anesthetic is then injected around each nerve (including the musculocutaneous, if indicated). 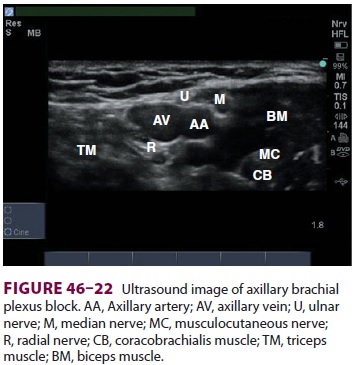