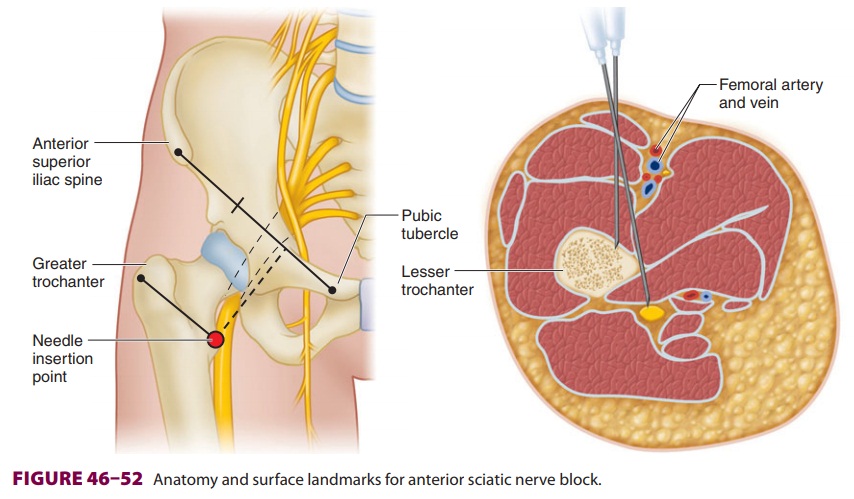 The sciatic nerve originates from the lumbosacral trunk and is composed of nerve roots L4–5 and S1–3.

46–38). Blockade of the sciatic nerve may occur anywhere along its courseand is indicated for surgical procedures involving the hip, thigh, knee, lower leg, and foot. The poste-rior femoral cutaneous nerve is variably anesthe-tized as well, depending on the approach. If sacral plexus or posterior femoral cutaneous nerve anes-thesia is required, the parasacral approach is used. 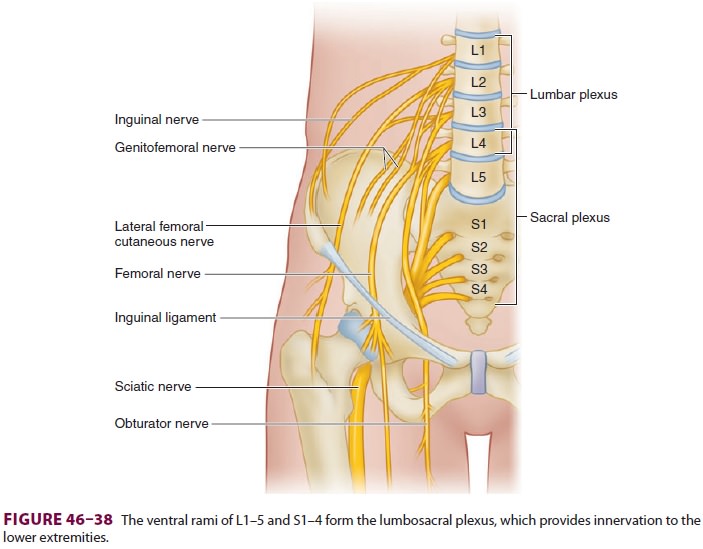 A. Posterior (Classic or Labat) Approach

The patient is positioned laterally with the side to be blocked in the nondependent position. The patient is asked to bend the knee of the affected leg and tilt the pelvis slightly forward (Sim’s position; Figure 46–51). The greater trochanter, posteriorsuperior iliac spine (PSIS), and sacral hiatus are then identified. A line is drawn from the greater trochan-ter to the PSIS, its midpoint identified, and a per-pendicular line extended in a caudal direction. Next, a line is drawn from the greater trochanter to the 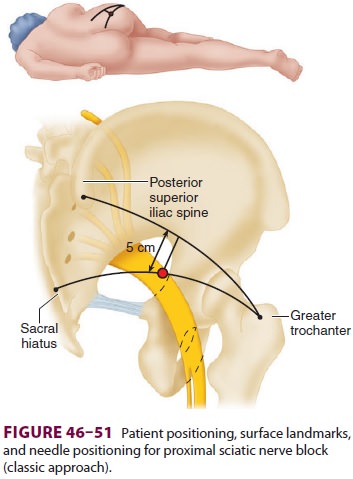 sacral hiatus and the intersection point is marked; this is the initial needle insertion point. A long (10-cm) insulated needle is inserted at an angle per-pendicular to all planes to the skin (Figure 46–51). The needle is advanced through the gluteal muscles (a motor response of these muscles may be encoun-tered) until plantar- or dorsiflexion is elicited (plan-tarflexion or foot inversion is preferred for surgical anesthesia). A local anesthetic volume of 25 mL pro-vides surgical anesthesia.

After leaving the sciatic notch, the sciatic nerve descends behind the lesser trochanter to a position posterior to the femur. It can be accessed from the anterior thigh just medial to the lesser trochanter. Lateral or prone positioning may present a challenge for some patients requiring a sciatic nerve block (ie, elderly patients, pediatric patients under general anesthesia). An anterior approach can be technically challenging but offers an alternative path to the sci-atic nerve. Before proceeding with this block, which carries a risk of vascular puncture (femoral artery and vein), patient-specific risks should be consid-ered (eg, coagulopathy and vascular grafting). In addition, if combining this block with the femoral nerve block in an unanesthetized patient, perform-ing the sciatic block first is recommended to avoid passing the block needle through a previously anes-thetized femoral nerve. A local anesthetic volume of 25 mL provides surgical anesthesia.

Nerve stimulation—With the patient positionedsupine, a line is drawn along the inguinal ligament, from the anterior superior iliac spine to the pubic tubercle (Figure 46–52). A second line is drawn par-allel to the first that traverses the greater trochanter (intertrochanteric line). Next, these two lines are connected with a third line drawn from the point between the medial one third and lateral two thirds of the first line, at a 90° angle, and extended caudally to intersect with the intertrochanteric line. A long (10- to 15-cm) needle is inserted through this inter-section and directly posterior until foot inversion or plantarflexion is elicited (dorsiflexion is accept-able for postoperative analgesia). Often with this approach, the femur is contacted before the needle reaches the sciatic nerve. When this occurs, the nee-dle should be withdrawn 2–3 cm, the patient should be asked to internally rotate the leg, and then the needle should be advanced. If the femur is contacted 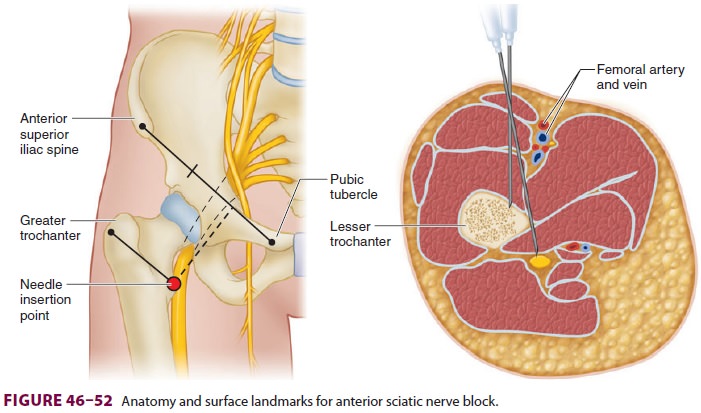 2. Ultrasound—With the patient positioned supineand the leg externally rotated, a low-frequency cur-vilinear transducer is placed transversely over the medial thigh, approximately at the level of the lesser trochanter. The femur, femoral vessels, adductor muscles, and gluteus maximus are identified in cross-section. The elliptical, hyperechoic sciatic nerve is found in the fascial plane between adductors and gluteus muscles, posterior to the femur. Using a long (10-cm) needle, the nerve is approached in-plane (anterior to posterior) or out-of-plane (cephalad to caudad), taking care to avoid femoral vessels, until the needle tip lies in this muscle plane and a local anesthetic injection can be observed as hypoechoic spread surrounding the sciatic nerve.

A subgluteal approach to the sciatic nerve is a useful alternative to the traditional posterior approach. In many patients the landmarks are more easily iden-tified, and less tissue is traversed. With the sciatic nerve at a more superficial location, the exclusive use of ultrasound becomes far more practical, as well. If sciatic nerve block is being combined with a femoral block and ambulation is desired within the local anesthetic duration, consider a popliteal approach (below) that will not affect the hamstring muscles to the same degree, allowing knee flexion to lift the foot with the use of crutches.

1. Nerve stimulation—With the patient inSim’s position, the greater trochanter and ischialtuberosity are identified and a line drawn between them (Figure 46–53). From the midpoint of this line, a second line is drawn perpendicularly and extended caudally 4 cm. Through this point a long (10-cm) insulated needle is inserted directly slightly cephalad until foot plantarflexion or inversion is elicited (dorsiflexion is acceptable for analgesia). A local anesthetic volume of 25 mL provides surgical anesthesia.

2. Ultrasound—Using the same positioning andlandmarks (Figure 46–53), a linear or low-frequency curvilinear (best) ultrasound transducer is placed over the midpoint between the ischial tuberosity and the greater trochanter in a transverse orienta-tion. Both bony structures should be visible in the ultrasound field simultaneously. Gluteal muscles are identified superficially, along with the fascial layer defining their deep border. The triangular sciatic nerve should be visible in cross-section just deep to this layer in a location approximately mid-way between the ischial tuberosity and the greater trochanter, superficial to the quadratus femoris muscle.

For an out-of-plane ultrasound-guided sciatic block, the block needle is inserted just caudad to the ultrasound transducer and advanced in an ante-rior and cephalad direction. Once the needle passes through the gluteus muscles with the tip next to sciatic nerve, careful aspiration for the nonappear-ance of blood is performed and local anesthetic is injected, visualizing spread around the nerve.

For an in-plane technique, the block needle is inserted just lateral to the ultrasound transducer near the greater trochanter. It is advanced through the field of the ultrasound beam until the tip is vis-ible deep to the gluteus maximus, next to the sci-atic nerve. Again, local anesthetic spread around the nerve should be visualized.

Popliteal nerve blocks provide excellent cover-age for foot and ankle surgery, while sparingmuch of the hamstring muscles, allowing lifting of the foot with knee flexion, thus easing ambulation. All sciatic nerve blocks fail to provide complete anesthesia for the cutaneous medial leg and ankle joint capsule, but when a saphenous (or femoral) block is added, complete anesthesia below the knee is provided. The major site-specific risk of a popliteal block is vascular puncture, owing to the sciatic nerve’s proximity to the popliteal vessels at this location.

The sciatic nerve divides into the tibial and common peroneal nerves within or just proximal to the popliteal fossa (Figure 46–54). The upper pop-liteal fossa is bounded laterally by the biceps femo-ris tendon and medially by the semitendinosus and semimembranosus tendons. Cephalad to the flexion crease of the knee, the popliteal artery is immedi-ately lateral to the semitendinosus tendon. The pop-liteal vein is lateral to the artery, and the tibial andcommon peroneal nerves are just lateral to the vein and medial to the biceps tendon, 2–6 cm deep to the skin. The tibial nerve continues deep behind the gastrocnemius muscle, and the common peroneal nerve leaves the popliteal fossa by passing between the head and neck of the fibula to supply the lower leg. The sciatic nerve is approached by either a poste-rior or a lateral approach. For posterior approaches, the patient is usually positioned prone with the knee slightly flexed by propping the ankle on pillows or towels. For lateral approaches, the patient may be in the lateral or supine position. 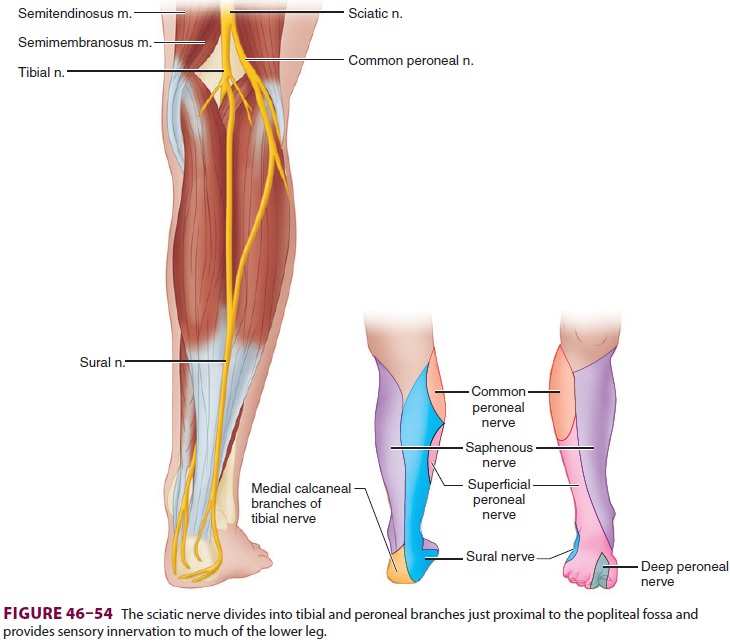 Nerve stimulation (posterior approach)—Withthe patient in the prone position, the apex of the popliteal fossa is identified. The hamstring muscles are palpated to locate the point where the biceps femoris (lateral) and the semimembranosus/semi-tendinosus complex (medial) join (Figure 46–55). Having the patient flex the knee against resistance facilitates recognition of these structures. The nee-dle entry point is 1 cm caudad from the apex. An insulated needle (5–10 cm) is advanced until foot plantarflexion or inversion is elicited (dorsiflexion is acceptable for analgesia). A volume of 30–40 mL of local anesthetic is often required for single-injection popliteal–sciatic nerve block.

Nerve stimulation (lateral approach)—Withthe patient in the supine position and the knee fully extended, the intertendinous groove is palpated between the vastus lateralis and biceps femoris muscles approximately 10 cm proximal to the supe-rior notch of the patella. A long (10-cm) insulated needle is inserted at this point and advanced at a 30° angle posteriorly until an appropriate motor response is elicited. If bone (femur) is contacted, the needle is withdrawn and redirected slightly posteriorly until an acceptable motor response is encountered.

Ultrasound—With the patient positionedprone, the apex of the popliteal fossa is identified, as described above. Using a high-frequency linear ultrasound transducer placed in a transverse orien-tation, the femur, biceps femoris muscle, popliteal vessels, and sciatic nerve or branches are identi-fied in cross-section (Figure 46–55). The nerve is usually posterior and lateral (or immediately pos-terior) to the vessels and is often located in close 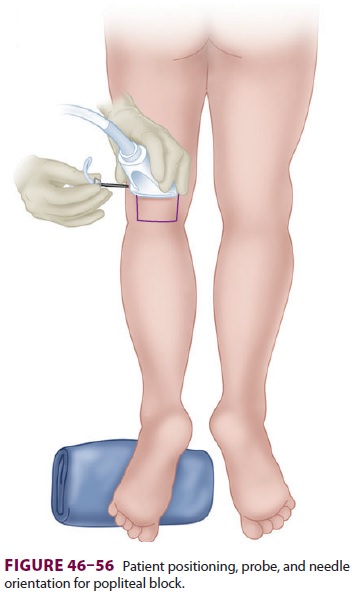 relationship to the biceps femoris muscle, just deep to its medial edge.

For an out-of-plane technique, the needle is inserted just caudad to the ultrasound transducer and directed anteriorly and slightly cephalad. When the needle is positioned in proximity to the sciatic nerve, and following careful aspiration, local anesthetic injected, observing for spread around the nerve.

For an in-plane technique, the block needle is inserted lateral to the ultrasound transducer, traversing—or just anterior to—the biceps femoris muscle (Figure 46–56). The needle is advanced in the ultrasound plane, while visualizing its approach either deep or superficial to the nerve.

If surgical anesthesia is desired, local anesthetic should be seen surrounding all sides of the nerve, which usually requires multiple needle tip place-ments with incremental injection. For analgesia alone, a single injection of local anesthetic is accept-able. Ultrasound-guided popliteal sciatic blocks may be performed with the patient in the lateral or supine positions (the latter with leg up-raised on several pillows). These maneuvers are often more technically challenging.