A field block is a local anesthetic injection that targets terminal cutaneous nerves.

A field block is a local anesthetic injection that tar-gets terminal cutaneous nerves (Figure 46–1). Field blocks are used commonly by surgeons to minimize incisional pain and may be used as a supplementary technique or as a sole anesthetic for minor, super-ficial procedures. Anesthesiologists often use field blocks to anesthetize the superficial cervical plexus for procedures involving the neck or shoulder; the intercostobrachial nerve for surgery involving the medial upper extremity proximal to the elbow (in combination with a brachial plexus nerve block); and the saphenous nerve for surgery involving the medial leg or ankle joint (in combination with a sci-atic nerve block). Field blocks may be undesirable in cases where they obscure the operative anatomy, or where local tissue acidosis from infection prevents effective local anesthetic functioning. 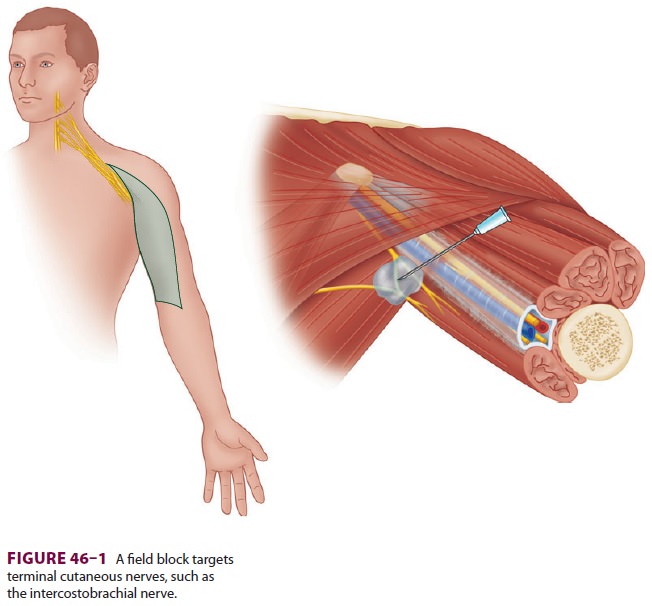 Formerly the mainstay of regional anesthesia, this technique is now rarely used for nerve localiza-tion. Using known anatomic relationships and sur-face landmarks as a guide, a block needle is placed in proximity to the target nerve or plexus. When a needle makes direct contact with a sensory nerve, a paresthesia (abnormal sensation) is elicited in its area of sensory distribution.

For this technique, an insulated needle concen-trates electrical current at the needle tip, while a wire attached to the needle hub connects to a nerve stimulator—a battery-powered machine that emits a small amount (0–5 mA) of electric current at a set interval (usually 1 or 2 Hz). A grounding electrode is attached to the patient to complete the circuit (Figure 46–2). When the insulated needle is placed in 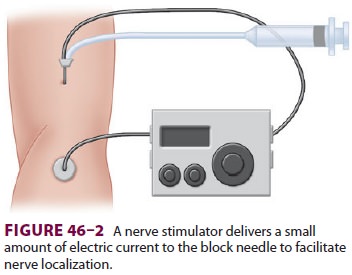 proximity to a motor nerve, muscle contractions are induced, and local anesthetic is injected. Although it is common to redirect the block needle until muscle contractions occur at a current less than 0.5 mA, there is scant evidence to support this specific cur-rent in all cases. Similarly, although some have sug-gested that muscle contraction with current less than 0.2 mA implies intraneural needle placement, there is little evidence to support this specific cutoff. Nonetheless, most practitioners inject local anes-thetic when current between 0.2 and 0.5 mA results in a muscle response. For most blocks using this technique, 30–40 mL of anesthetic is usually injected with gentle aspiration between divided doses.

Ultrasound for peripheral nerve localization is becoming increasingly popular; it may be used alone or combined with other modalities such as nerve stimulation. Ultrasound uses high-frequency (1–20 MHz) sound waves emitted from piezoelectric crys-tals that travel at different rates through tissues of dif-ferent densities, returning a signal to the transducer. Depending on the amplitude of signal received, the crystals deform to create an electronic voltage that is converted into a two-dimensional grayscale image. The degree of efficiency with which sound passes through a substance determines its echogenicity. Structures and substances through which sound passes easily are described as hypoechoic and appear dark or black on the ultrasound screen. In contrast, structures reflecting more sound waves appear brighter—or white—on the ultrasound screen, and are termed hyperechoic.

The optimal transducer varies depending upon the depth of the target nerve and approach angle of the needle relative to the transducer (Figure 46–3). High-frequency transducers provide a high-res-olution picture with a relatively clear image but 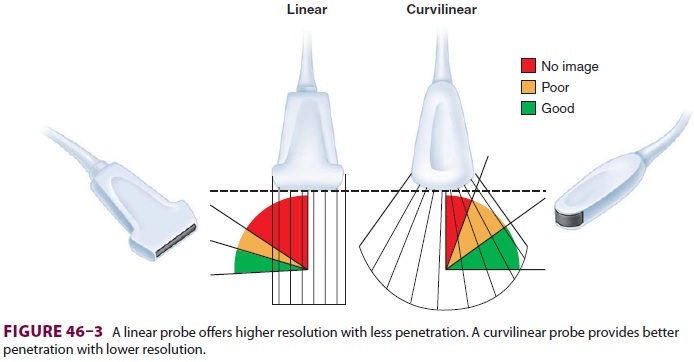 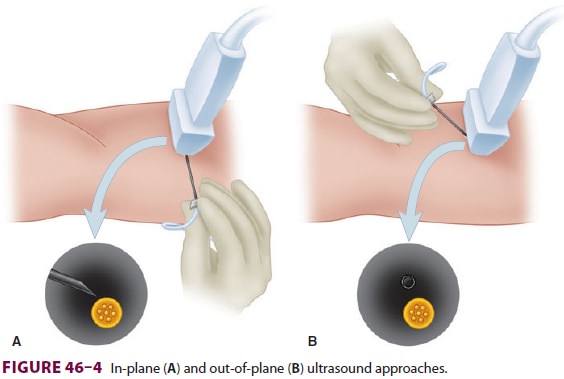 more acute angle between the needle and long-axis of the transducer, a curved array (curvilinear) trans-ducer will maximize returning ultrasound waves, providing the optimal needle image (Figure 46–3). Nerves are best imaged in cross-section, where they have a characteristic honeycomb appearance (“short axis”). Needle insertion can pass either par-allel (“in plane”) or not parallel (“out of plane”) to the plane of the ultrasound waves (Figure 46–4). Unlike nerve stimulation alone, ultrasound guid-ance allows for a variable volume of local anesthetic to be injected, with the final amount determined by what is observed under direct vision. This technique usually results in a far lower injected volume of local anesthetic (10–30 mL).

Also termed perineural local anesthetic infusion, continuous peripheral nerve blocks involve the placement of a percutaneous catheter adjacent to a peripheral nerve, followed by local anes-thetic administration to prolong a nerve block (Figure 46–5). Potential advantages appear to depend on successfully improving analgesia and include reductions in resting and dynamic pain, sup-plemental analgesic requirements, opioid-related side effects, and sleep disturbances. In some cases patient satisfaction, ambulation, and functioning may be improved; an accelerated resumption of passive joint range-of-motion realized; and reduced time until discharge-readiness as well as actual dis-charge from the hospital or rehabilitation center achieved. 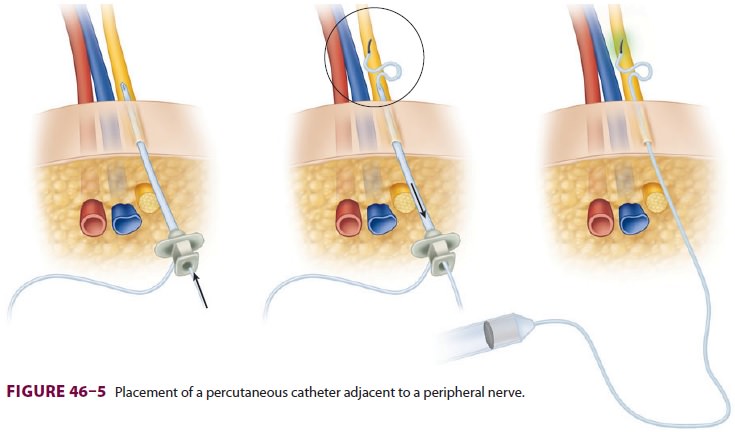 Th ere are many types of catheters, including nonstimulating and stimulating, flexible and more rigid, through-the-needle and over-the-needle. Currently, there is little evidence that a single design results in superior effects. Local anesthetic is the primary medication infused, as adjuvants do not add benefits to perineural infusions (unlike single-injection peripheral nerve blocks). Long-acting local anesthetics (eg, ropivacaine) are more commonly used as they provide a more favorable sensory-to-motor block ratio (optimizing analgesia while minimizing motor block). In an attempt to further minimize any induced motor block, dilute

local anesthetic (0.1–0.2%) is often infused; how-ever, recent evidence suggests that it is the total dose, and not concentration, that determines the major-ity of block effects. Unlike single-injection peripheral nerve blocks, no adjuvant added to a perineural local anesthetic infusion has been demonstrated to be of benefit. The local anesthetic may be administered exclusively as repeated bolus doses or a basal infu-sion, or as a combination of the two methods. Using a small, portable infusion pump (Figure 46–6), con-tinuous peripheral nerve blocks may be provided on an ambulatory basis. 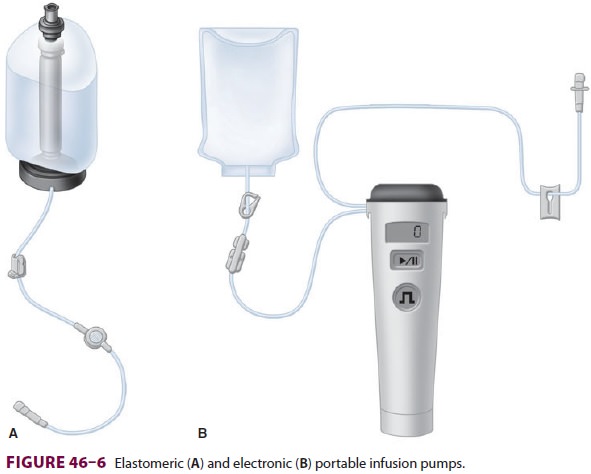 As with all medical procedures, there are potential risks associated with continuous periph-eral nerve blocks. Therefore, these infusions are usually reserved for patients having procedures expected to result in postoperative pain that is dif-ficult to control with oral analgesics and will not resolve in less time than the duration of a single-injection peripheral nerve block. Serious compli-cations, which are relatively rare, include systemic local anesthetic toxicity, catheter retention, nerve injury, infection, and retroperitoneal hematoma formation. In addition, a perineural infusion affect-ing the femoral nerve increases the risk of fall-ing, although to what degree and by what specific mechanism (eg, sensory, motor, or proprioception deficits) remain unknown.