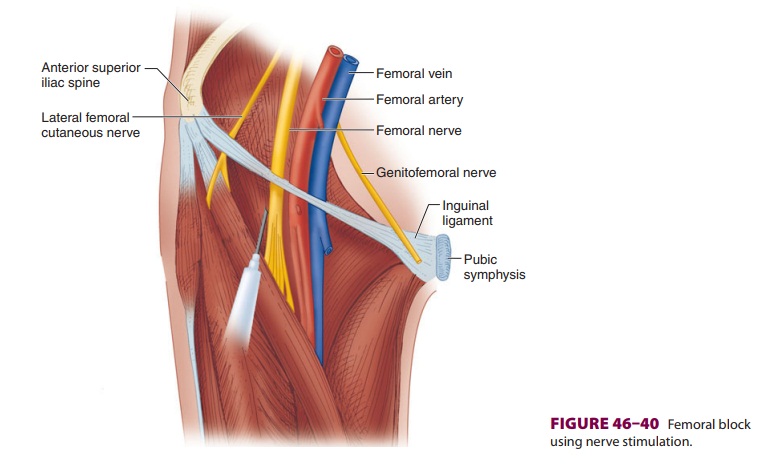 The femoral nerve innervates the main hip flexors, knee extensors, and provides much of the sensory innervation of the hip and thigh.

The femoral nerve innervates the main hip flexors, knee extensors, and provides much of the sensory 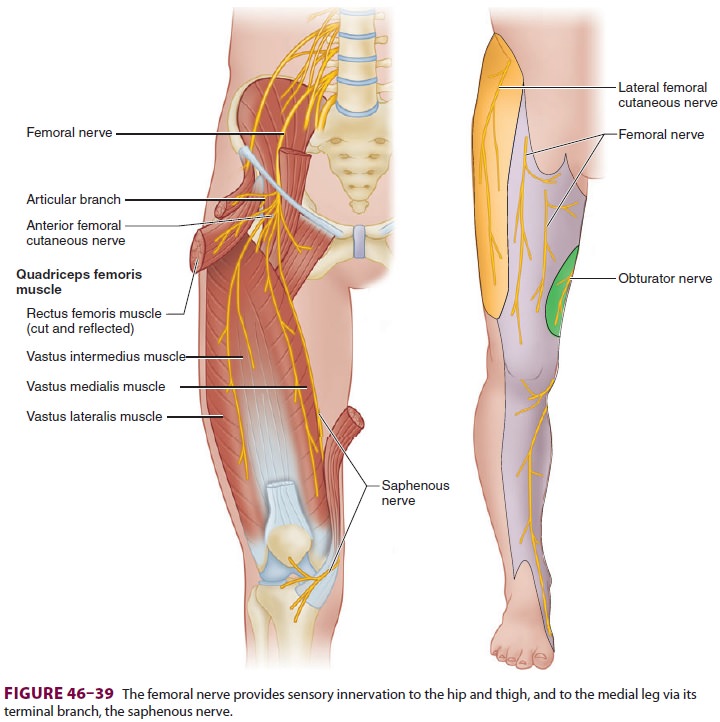 innervation of the hip and thigh (Figure 46–39). Its most medial branch is the saphenous nerve, which innervates much of the skin of the medial leg and ankle joint. The term 3-in-1 block refers to anesthe-tizing the femoral, lateral femoral cutaneous, and obturator nerves with a single injection below the inguinal ligament; this term has largely been aban-doned as evidence accumulated demonstrating the failure of most single injections to consistently affect

With the patient positioned supine, the femoral artery pulse is palpated at the level of the inguinal ligament. A short (5-cm) insulated needle is inserted at a 45° angle to the skin in a cephalad direction (Figure 46–40) until a clear quadriceps twitch is elicited at a current below 0.5 mA (look for patella motion). 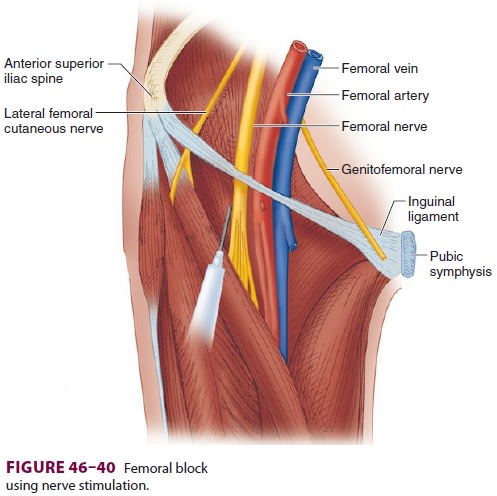 A high-frequency linear ultrasound transducer is placed over the area of the inguinal crease paral-lel to the crease itself, or slightly more transverse (Figure 46–41). The femoral artery and femoral vein are visualized in cross-section, with the overly-ing fascia iliaca. Just lateral to the artery and deep to the fascia iliaca, the femoral nerve appears in cross-section as a spindle-shaped structure with a “honey-comb” texture (Figure 46–42).

For an out-of-plane technique, the block needle is inserted just lateral to where the femoral nerve is seen, and directed cephalad at an angle approxi-mately 45° to the skin. The needle is advanced until it is seen penetrating the fascia iliaca, or (if using concurrent electrical stimulation) until a motor response is elicited. Following careful aspiration for the nonappearance of blood, 30–40 mL of local anesthetic is injected. 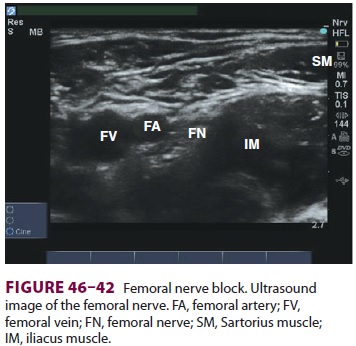 For an in-plane technique, a longer needle may be used. The needle is inserted parallel to the ultra-sound transducer just lateral to the outer edge. The needle is advanced through the sartorius muscle, deep to the fascia iliaca, until it is visualized just lat-eral to the femoral nerve. Local anesthetic is injected, visualizing its hypoechoic spread deep to the fascia iliaca and around the nerve.

The goal of a fascia iliaca block is similar to that of a femoral nerve block, but the approach is slightly different. Without use of a nerve stimulator or ultrasound machine, a relatively reliable level of anesthesia may be attained simply with anatomic landmarks and tactile sensation. Once the inguinal ligament and femoral artery pulse are identified, 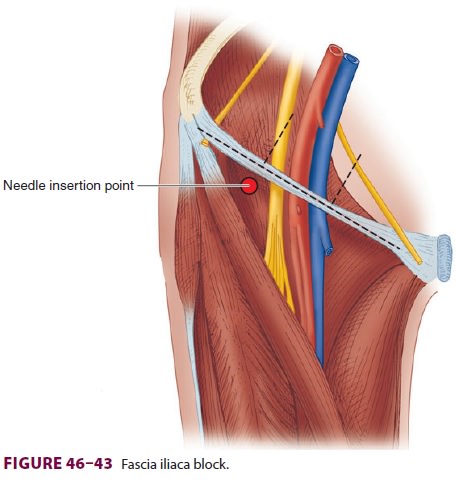 the length of the inguinal ligament is divided into thirds (Figure 46–43). Two centimeters distal to the junction of the middle and outer thirds, a short, blunt-tipped needle is inserted in a slightly cephalad direction. As the needle passes through the two layers of fascia in this region (fascia lata and fascia iliaca), two “pops” will be felt. Once the needle has passed through the fascia iliaca, careful aspiration is per-formed and 30–40 mL of local anesthetic is injected. This block usually anesthetizes both the femoral nerve and lateral femoral cutaneous nerves, since the local anesthetic is deposited under the fascia iliaca between the two nerves which run in the same plane between the fascia and underlying muscle.