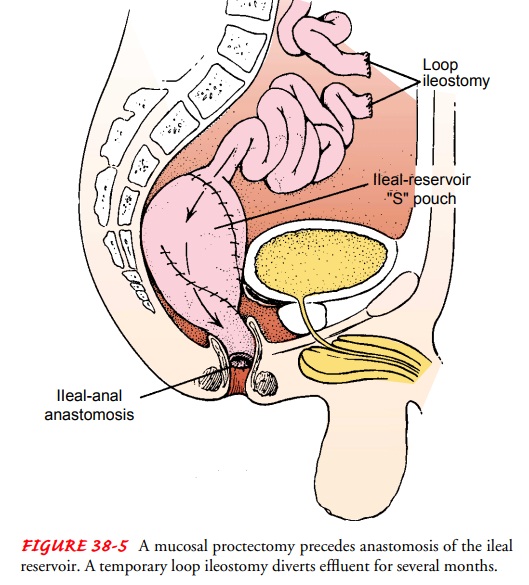 Ulcerative colitis is a recurrent ulcerative and inflammatory disease of the mucosal and submucosal layers of the colon and rectum.

Ulcerative colitis is a recurrent ulcerative and inflammatory dis-ease of the mucosal and submucosal layers of the colon and rec-tum. The incidence of ulcerative colitis is highest in Caucasians and people of Jewish heritage (Yamada et al., 1999). The peak in-cidence is between 30 and 50 years of age. It is a serious disease, accompanied by systemic complications and a high mortality rate. Eventually, 10% to 15% of the patients develop carcinoma of the colon.

Ulcerative colitis affects the superficial mucosa of the colon and is characterized by multiple ulcerations, diffuse inflammations, and desquamation or shedding of the colonic epithelium. Bleed-ing occurs as a result of the ulcerations. The mucosa becomes edematous and inflamed. The lesions are contiguous, occurring one after the other. Abscesses form, and infiltrate is seen in the mucosa and submucosa with clumps of neutrophils in the crypt lumens (ie, crypt abscesses). The disease process usually begins in the rectum and spreads proximally to involve the entire colon. Eventually, the bowel narrows, shortens, and thickens because of muscular hypertrophy and fat deposits.

The clinical course is usually one of exacerbations and remissions. The predominant symptoms of ulcerative colitis are diarrhea, lower left quadrant abdominal pain, intermittent tenesmus, and rectal bleeding. The bleeding may be mild or severe, and pallor results. The patient may have anorexia, weight loss, fever, vomit-ing, and dehydration, as well as cramping, the feeling of an ur-gent need to defecate, and the passage of 10 to 20 liquid stools each day. The disease is classified as mild, severe, or fulminant, depending on the severity of the symptoms. Hypocalcemia and anemia frequently develop. Rebound tenderness may occur in the right lower quadrant. Extraintestinal symptoms include skin le-sions (eg, erythema nodosum), eye lesions (eg, uveitis), joint ab-normalities (eg, arthritis), and liver disease.

The patient should be assessed for tachycardia, hypotension, tachyp-nea, fever, and pallor. Other assessments include the level of hy-dration and nutritional status. The abdomen should be examined for characteristics of bowel sounds, distention, and tenderness. These findings assist in determining the severity of the disease.

The stool is positive for blood, and laboratory test results re-veal a low hematocrit and hemoglobin concentration in addition to an elevated white blood cell count, low albumin levels, and an electrolyte imbalance. Abdominal x-ray studies are useful for de-termining the cause of symptoms. Free air in the peritoneum and bowel dilation or obstruction should be excluded as a source of the presenting symptoms. Sigmoidoscopy or colonoscopy and barium enema are valuable in distinguishing this condition from other diseases of the colon with similar symptoms. A barium enema may show mucosal irregularities, focal strictures or fistu-las, shortening of the colon, and dilation of bowel loops. En-doscopy may reveal friable, inflamed mucosa with exudate and ulcerations. This procedure assists in defining the extent and severity of the disease. CT scanning, magnetic resonance imag-ing, and ultrasound can identify abscesses and perirectal in volvement. Leukocyte scanning is useful when se-vere colitis prohibits the use of endoscopy to determine the ex-tent of inflammation.

Careful stool examination for parasites and other microbes is performed to rule out dysentery caused by common intestinal or-ganisms, especially Entamoeba histolytica and Clostridium difficile.

Complications of ulcerative colitis include toxic megacolon, per-foration, and bleeding as a result of ulceration, vascular engorge-ment, and highly vascular granulation tissue. In toxic megacolon, the inflammatory process extends into the muscularis, inhibiting its ability to contract and resulting in colonic distention. Symp-toms include fever, abdominal pain and distention, vomiting, and fatigue. Colonic perforation from toxic megacolon is asso-ciated with a high mortality rate (15% to 50%) (Grendell et al., 1998). If the patient with toxic megacolon does not respond within 24 to 48 hours to medical management with nasogastric suction, intravenous fluids with electrolytes, corticosteroids, and antibiotics, surgery is required. Total colectomy is indicated. For many patients, surgery becomes necessary to relieve the effects of the disease and to treat these serious complications; an ileostomy usually is performed. The surgical procedures involved and the care of patients with this type of fecal diversion are discussed later.

Patients with IBD also have a significantly increased risk of os-teoporotic fractures due to decreased bone mineral density. Corti-costeroid therapy may also contribute to the diminished bone mass.

Medical treatment for regional enteritis and ulcerative colitis is aimed at reducing inflammation, suppressing inappropriate im-mune responses, providing rest for a diseased bowel so that heal-ing may take place, improving quality of life, and preventing or minimizing complications.

Oral fluids and a low-residue, high-protein, high-calorie diet with supplemental vitamin therapy and iron replacement are prescribed to meet nutritional needs, reduce inflammation, and control pain and diarrhea. Fluid and electrolyte imbalances from dehydration caused by diarrhea are corrected by intravenous therapy as neces-sary if the patient is hospitalized or by oral supplementation if the patient can be managed at home. Any foods that exacerbate diar-rhea are avoided. Milk may contribute to diarrhea in those with lactose intolerance. Cold foods and smoking are avoided because both increase intestinal motility. Parenteral nutrition may be indicated.

Sedatives and antidiarrheal and antiperistaltic medications are used to minimize peristalsis to rest the inflamed bowel. They are continued until the patientâ€™s stools approach normal frequency and consistency.

Aminosalicylate formulations such as sulfasalazine (Azulfidine) are often effective for mild or moderate inflammation and are used to prevent or reduce recurrences in long-term maintenance regi-mens. Newer sulfa-free aminosalicylates (eg, mesalamine [Asacol, Pentasa]) have been developed and shown effective in preventing and treating recurrence of inflammation (Wolfe, 2000). Anti-biotics are used for secondary infections, particularly for purulent complications such as abscesses, perforation, and peritonitis.

Immunomodulators (eg, azathioprene [Imuran], 6-mercap-topurine, methotrexate, cyclosporin) have been used to alter the immune response (Wolfe, 2000). The exact mechanism of action of these medications in treating IBD is unknown. They are used for patients with severe disease who have failed other therapies. These medications are useful in maintenance regimens to prevent relapses. Newer biologic therapies are being studied, and it is hoped that they will lead to improvement in the treatment of pa-tients with chronically active disease (Yamada et al., 1999).

When nonsurgical measures fail to relieve the severe symptoms of IBD, surgery may be recommended. The most common indications for surgery are medically intractable disease, poor quality of life, or complications from the disease or medical ther-apy (Wolfe, 2000).

A newer surgical procedure developed for patients with severe regional enteritis is intestinal transplant. This technique is now available to children and to young and middle-age adults who have lost intestinal function from disease. Although not a cure, this procedure may eventually provide improvement in quality of life for some who are terminally ill. The technical and immunologic problems with this procedure remain formidable, and the costs and mortality rates remain high (Wolfe, 2000).

One type of surgical technique that can be helpful is stric-tureplasty, in which the blocked or narrowed section of the bowel is widened, leaving the bowel intact. If a lesion can be delineated in regional enteritis or if a complication has occurred, the lesion is resected, and the remaining portions of the bowel are anasto-mosed. Surgical removal of up to 50% of the small bowel usually can be tolerated. Other types of surgical procedures, known as fecal diversions, are discussed later.

Anileostomy, the surgical cre-ation of an opening into the ileum or small intestine (usually by means of an ileal stoma on the abdominal wall), is commonly per-formed after a total colectomy (ie, excision of the entire colon). It allows for drainage of fecal matter (ie, effluent) from the ileum to the outside of the body. The drainage is very mushy and oc-curs at frequent intervals. Nursing management of the patient with an ileostomy is discussed in a later section.

Another procedureinvolves the removal of the entire colon and creation of the con-tinent ileal reservoir (ie, Kock pouch). This procedure eliminates the need for an external fecal collection bag. Approximately 30 cm of the distal ileum is reconstructed to form a reservoir with a nipple valve that is created by pulling a portion of the terminal ileal loop back into the ileum. GI effluent can accumulate in the pouch for several hours and then be removed by means of a catheter inserted through the nipple valve. The major problem with the Kock pouch is malfunction of the nipple valve, which occurs in about 20% of the patients (Yamada et al., 1999). 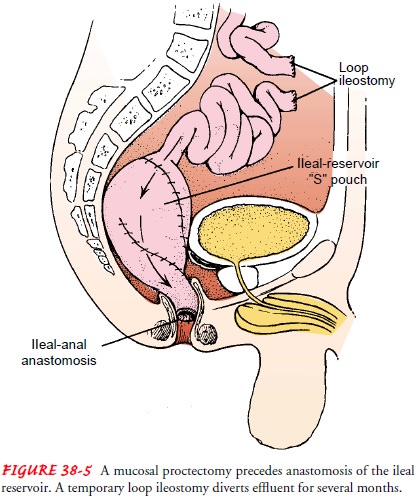 Nursing management of patients with IBD may be medical, sur-gical, or both. Patients in the community setting or those recently diagnosed may primarily require education about diet and med-ications and referral to support groups. Hospitalized patients with long-standing or severe disease also require careful monitoring, parenteral nutrition, fluid replacement, and possibly emergent surgery. The surgical procedures may involve a fecal diversion, with attendant needs for physical care, emotional support,    and extensive teaching about management of the ostomy.