Anorectal disorders are common, and more than one half of the population will experience one at some time during their lives .

There has been a steady increase in the frequency of sexually transmitted diseases in recent decades, leading to the identifica-tion of new anorectal syndromes. The prevalence of these condi-tions is increasing. These syndromes include venereal infections such as syphilis, gonorrhea, herpes, chlamydia, and candidiasis, and they are most commonly seen in male homosexuals who practice anorectal intercourse (Wolfe, 2000).

An abscess may occur in a variety of spaces in and around the rectum. It often contains a quantity of foul-smelling pus and is painful. If the abscess is superficial, swelling, redness, and ten-derness are observed. A deeper abscess may result in toxic symp-toms, lower abdominal pain, and fever.

Palliative therapy consists of sitz baths and analgesics. How-ever, prompt surgical treatment to incise and drain the abscess is the treatment of choice. When a deeper infection exists with the possibility of a fistula, the fistulous tract must be excised. If pos-sible, the fistula is excised when the abscess is incised and drained, or a second procedure to do so may be necessary. The wound may be packed with gauze and allowed to heal by granulation.

Surgery is always recommended, because few fistulas heal spon-taneously. A fistulectomy (ie, excision of the fistulous tract) is the recommended surgical procedure. The lower bowel is evacuated thoroughly with several prescribed enemas. During surgery, the sinus tract is identified by inserting a probe into it or by injecting the tract with methylene blue solution. The fistula is dissected out or laid open by an incision from its rectal opening to its outlet. The wound is packed with gauze.

If fissures do not respond to conservative treatment, surgery is indicated. The procedure considered by most surgeons to be the procedure of choice is the lateral internal sphincterotomy with excision of the fissure; the success rate is 90% to 95% (Rieghley, 1999).

Hemorrhoids cause itching and pain and are the most common cause of bright red bleeding with defecation. External hemor-rhoids are associated with severe pain from the inflammation and edema caused by thrombosis (ie, clotting of blood within the hem-orrhoid). This may lead to ischemia of the area and eventual necrosis. Internal hemorrhoids are not usually painful until they bleed or prolapse when they become enlarged.

Hemorrhoid symptoms and discomfort can be relieved by good personal hygiene and by avoiding excessive straining during defecation. A high-residue diet that contains fruit and bran along with an increased fluid intake may be all the treatment that is necessary to promote the passage of soft, bulky stools to prevent straining. If this treatment is not successful, the addition of hy-drophilic bulk-forming agents such as psyllium and mucilloid may help. Warm compresses, sitz baths, analgesic ointments and suppositories, astringents (eg, witch hazel), and bed rest allow the engorgement to subside.

There are several types of nonsurgical treatments for hemor-rhoids. Infrared photocoagulation, bipolar diathermy, and laser therapy are newer techniques that are used to affix the mucosa to the underlying muscle. Injecting sclerosing solutions is also ef-fective for small, bleeding hemorrhoids. These procedures help prevent prolapse.

A conservative surgical treatment of internal hemorrhoids is the rubber-band ligation procedure. The hemorrhoid is visual-ized through the anoscope, and its proximal portion above the mucocutaneous lines is grasped with an instrument. A small rub-ber band is then slipped over the hemorrhoid. Tissue distal to the rubber band becomes necrotic after several days and sloughs off. Fibrosis occurs; the result is that the lower anal mucosa is drawn up and adheres to the underlying muscle. Although this treat-ment has been satisfactory for some patients, it has proven painful for others and may cause secondary hemorrhage. It has been known to cause perianal infection.

Cryosurgical hemorrhoidectomy, another method for re-moving hemorrhoids, involves freezing the hemorrhoid for a sufficient time to cause necrosis. Although it is relatively pain-less, this procedure is not widely used because the discharge is very foul smelling and wound healing is prolonged. The Nd:YAG laser is useful in excising hemorrhoids, particularly external hemorrhoidal tags. The treatment is quick and rela-tively painless. Hemorrhage and abscess are rare postoperative complications.

The previously described methods of treating hemorrhoids are not effective for advanced thrombosed veins, which must be treated by more extensive surgery. Hemorrhoidectomy, or surgi-cal excision, can be performed to remove all the redundant tissue involved in the process. During surgery, the rectal sphincter is usually dilated digitally and the hemorrhoids are removed with a clamp and cautery or are ligated and then excised. After the op-erative procedures are completed, a small tube may be inserted through the sphincter to permit the escape of flatus and blood; pieces of Gelfoam or Oxycel gauze may be placed over the anal wounds.

Three infectious syndromes that are related to sexually transmitted diseases have been identified. Proctitis involves the rectum. It is commonly associated with recent anal-receptive intercourse with an infected partner. Symptoms include a mucopurulent discharge or bleeding, pain in the area, and diarrhea. The pathogens most fre-quently involved are Neisseria gonorrheae (53%), Chlamydia (20%), herpes simplex virus (18%), and Treponema pallidium (9%) (Yamada et al., 1999). Proctocolitis involves the rectum and lowest portion of the descending colon. Symptoms are similar to proctitis but may also include watery or bloody diarrhea, cramps, pain, and bloating. Enteritis involves more of the descending colon, and symp-toms include watery, bloody diarrhea; abdominal pain; and weight loss. The most common pathogens causing enteritis are E. histolyt-ica, Giardia lamblia, Shigella, and Campylobacter (Wolfe, 2000).

Sigmoidoscopy is performed to identify portions of the anorec-tum involved. Samples are taken with rectal swabs, and cultures are obtained to identify the pathogens involved. The treatment of choice for bacterial infections is antibiotics (ie, cefixime, doxycy-cline, and penicillin). Acyclovir is given to those with viral infec-tions. Infections from E. histolytica and G. lamblia are treated with antiamebic therapy (ie, metronidazole). Ciprofloxacin is an effec-tive treatment for Shigella. Antibiotics of choice for Campylobacter infection are erythromycin and ciprofloxacin.

A pilonidal sinus or cyst is found in the intergluteal cleft on the posterior surface of the lower sacrum (Fig. 38-12). Current the-ories suggest that it results from local trauma that causes the penetration of hairs into the epithelium and subcutaneous tissue (Yamada et al., 1999). 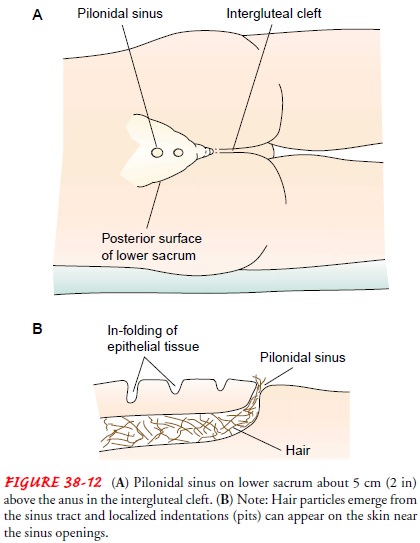 It may also be formed congenitally by an infolding of epithelial tissue beneath the skin, which may com-municate with the skin surface through one or several small sinus openings. Hair frequently is seen protruding from these open-ings, and this gives the cyst its name, pilonidal (ie, a nest of hair). The cysts rarely cause symptoms until adolescence or early adult life, when infection produces an irritating drainage or an abscess. Perspiration and friction easily irritate this area.

In the early stages of the inflammation, the infection may be controlled by antibiotic therapy, but after an abscess has formed, surgery is indicated. The abscess is incised and drained under local anesthesia. After the acute process resolves, further surgery is performed to excise the cyst and the secondary sinus tracts. The wound is allowed to heal by granulation. Gauze dressings are placed in the wound to keep its edges separated while heal-ing occurs.