The ovules are classified into six main types based on the orientation, form and position of the micropyle with respect to funicle and chalaza.

The ovules are classified into six main types based on the orientation, form and position of the micropyle with respect to funicle and chalaza. Most important ovule types are orthotropous, anatropous, hemianatropous and campylotropous. The types of ovule is given in Figure 1.8. 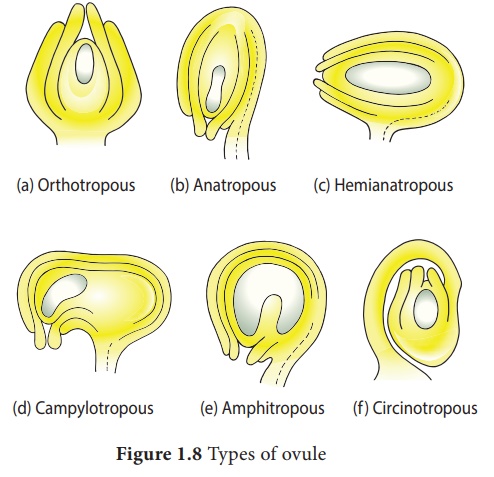 Orthotropous: In this type of ovule, the micropyle is at the distal end and the micropyle, the funicle and the chalaza lie in one straight verticalline. Examples: Piperaceae, Polygonaceae

Anatropous: The body of the ovule becomes completely inverted so that the micropyle and funiculus come to lie very close to each other. This is the common type of ovules found in dicots and monocots.

Hemianatropous: In this, the body of the ovule is placed transversely and at right angles to the funicle. Example: Primulaceae.

Campylotropous: The body of the ovule at the micropylar end is curved and more or less bean shaped. The embryo sac is slightly curved. All the three, hilum, micropyle and chalaza are adjacent to one another, with the micropyle oriented towards the placenta. Example: Leguminosae

In addition to the above main types there are two more types of ovules they are, Amphitropous: The distance between hilum and chalaza is less. The curvature of the ovule leads to horse-shoe shaped nucellus. Example: some Alismataceae.