Pollen on the stigma

In nature, a variety of pollens fall on the receptive stigma, but all of them do not germinate and bring out fertilization. The receptive surface of the stigma receives the pollen. If the pollen is compatible with the stigma it germinates to form a tube. This is facilitated by the stigmatic fluid in wet stigma and pellicle in dry stigma. These two also decide the incompatibility and compatibility of the pollen through recognition-rejection protein reaction between the pollen and stigma surface. Sexual incompatibility may exist between different species (interspecific) or between members of the same species (intraspecific).The latter is called self-incompatibility. The first visible change in the pollen, soon after it lands on stigma is hydration. The pollen wall proteins are released from the surface. During the germination of pollen its entire content moves into the pollen tube. The growth is restricted to the tip of the tube and all the cytoplasmic contents move to the tip region. The remaining part of the pollen tube is occupied by a vacuole which is cut off from the tip by callose plug. The extreme tip of pollen tube appears hemispherical and transparent when viewed through the microscope. This is called cap block. As soon as the cap block disappear the growth of the pollen tube stops.

Pollen tube in the style

There are three types of style a) Hollow or open style b)solid style or closed style c) semi-solid or half closed style.

Hollow style (Open style): It is common among monocots. A hollow canal running from the stigma to the base of the style is present. The canal is lined by a single layer of glandular canal cells (Transmitting tissue).They secrete mucilaginous substances. The pollen tube grows on the surface of the cells lining the stylar canal. The canal is filled with secretions which serve as nutrition for growing pollen tubes and also controlling incompatibility reaction between the style and pollen tube. The secretions contain carbohydrates, lipids and some enzymes like esterases, acid phosphatases as well as compatibility controlling proteins.

Solid style (Closed type): It is common among dicots. It is characterized by the presence of central core of elongated, highly specialised cells called transmitting tissue.This is equivalent to the lining cells of hollow style and does the same function. Its contents are also similar to the content of those cells. The pollen tube grows through the intercellular spaces of the transmitting tissue.

Semi-solid style (half closed type) : This is intermediate between solid and open type. 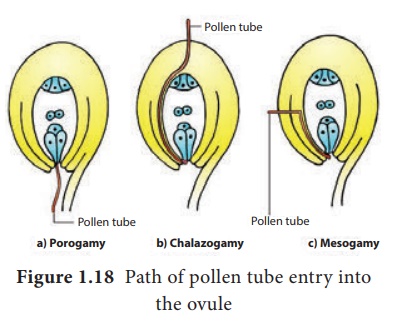 Porogamy: when the pollen tube enters through the micropyle.

Chalazogamy: when the pollen tube enters through the chalaza.

Mesogamy: when the pollen tube enters through the integument.

Irrespective of the place of entry of pollen tube into ovule, it enters the embryo sac at the micropylar end. The pollen enters into embryo sac directly into one of the synergids. 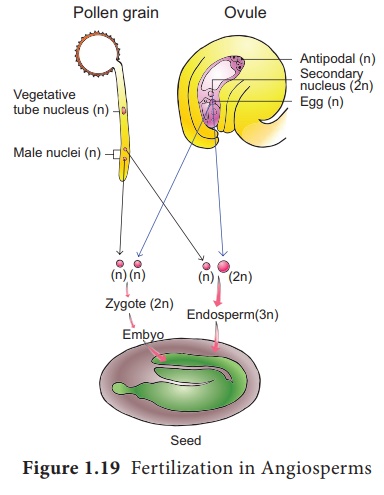 The second gamete migrates to the central cell where it fuses with the polar nuclei or their fusion product, the secondary nucleus and forms the primary endosperm nucleus (PEN).

Since this involves the fusion of three nuclei, this phenomenon is called triple fusion. This act results in endosperm formation which forms the nutritive tissue for the embryo. 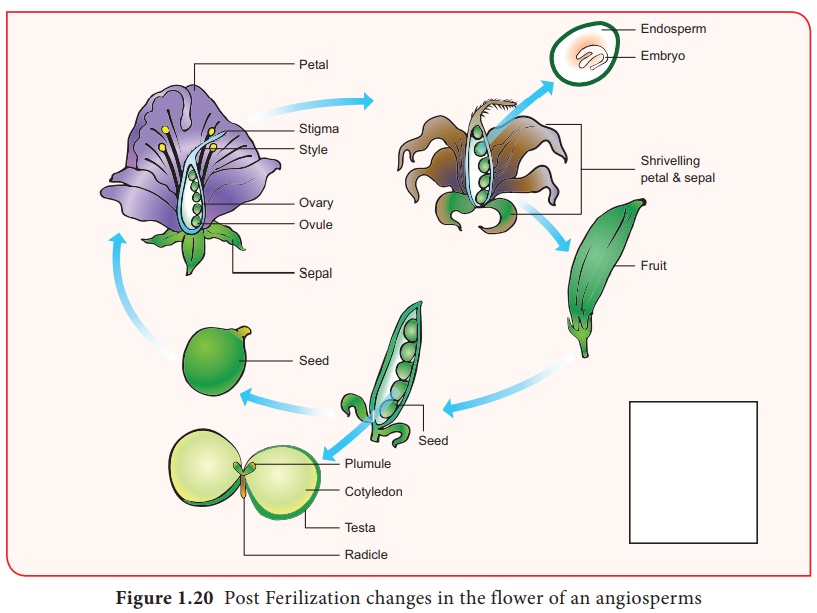 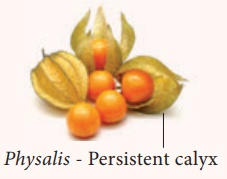 ·         The flower stalk or axis below the gynoecium enlarges into a juicy pear shaped body which is edible (Anacardium occidentale). 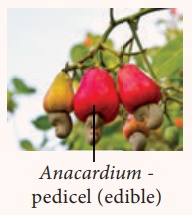 The Perianth becomes fleshy as in Jack fruit.

The cells present at the tip of the outer integument around the micropyle develop into a fleshy structure called caruncle. (Ricinus communis).

•   The funiculus develops into a fleshy structure which is often very colourful and called aril. (Myristica and Pithecellobium) 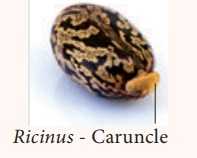 •   The nucellar tissue is either absorbed completely by the developing embryo sac and embryo or small portion may remain as storage tissue. Thus the remnant of nucellar tissue in the seed is called perisperm. Example: Black pepper and beet root