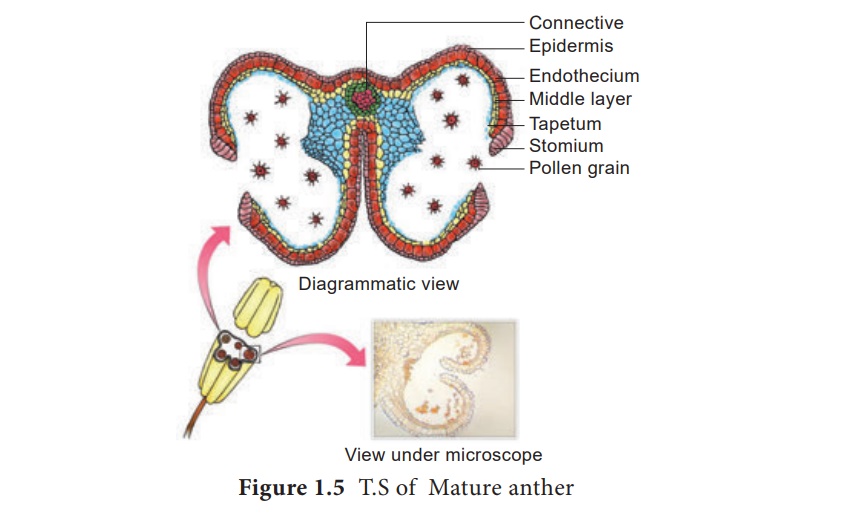 Transverse section of mature anther reveals the presence of anther cavity surrounded by an anther wall.

Transverse section of mature anther reveals the presence of anther cavity surrounded by an anther wall. It is bilobed, each lobe having 2 theca (dithecous). A typical anther is tetrasporangiate. The T.S. of Mature anther is given in Figure 1.5.

a. Epidermis: It is single layered and protective in function. The cells undergo repeated anticlinal divisions to cope up with the rapidly enlarging internal tissues.

b. Endothecium: It is generally a single layer of radially elongated cells found below the epidermis. The inner tangential wall develops bands (sometimes radial walls also) of α cellulose (sometimes also slightly lignified). The cells are hygroscopic. In the anthers of aquatic plants, saprophytes, cleistogamous flowers and extreme parasites endothecial differentiation is absent. The cells along the junction of the two sporangia of an anther lobe lack these thickenings. This region is called stomium. This region along with the hygroscopic nature of endothecium helps in the dehiscence of anther at maturity. 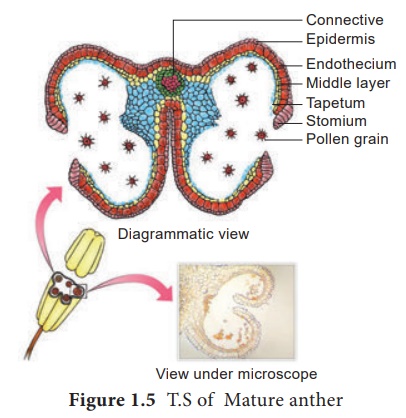 c. Middle layers: Two to three layers of cells next to endothecium constitute middle layers. They are generally ephemeral. They disintegrate or get crushed during maturity.

d. Tapetum: It is the innermost layer of anther wall and attains its maximum development at the tetrad stage of microsporogenesis. It is derived partly from the peripheral wall layer and partly from the connective tissue of the anther lining the anther locule. Thus, the tapetum is dual in origin. It nourishes the developing sporogenous tissue, microspore mother cells and microspores. The cells of the tapetum may remain uninucleate or may contain more than one nucleus or the nucleus may become polyploid. It also contributes to the wall materials, sporopollenin, pollenkitt, tryphine and number of proteins that control incompatibility reaction .Tapetum also controls the fertility or sterility of the microspores or pollen grains.

There are two types of tapetum based on its behaviour. They are:

Invasive tapetum (periplasmodial): The cells loose their inner tangential and radial walls and the protoplast of all tapetal cells coalesces to form a periplasmodium.

·         It supplies nutrition to the developing microspores.

·         The pollenkitt material is contributed by tapetal cells and is later transferred to the pollen surface.

Exine proteins responsible for ‘rejection reaction’ of the stigma are present in the cavities of the exine. These proteins are derived from tapetal cells.

2.     Anther Cavity : The anther cavity is filled with microspores in young stages or with pollen grains at maturity. The meiotic division of microspore mother cells gives rise to microspores which are haploid in nature.

3.     Connective: It is the column of sterile tissue surrounded by the anther lobe. It possesses vascular tissues. It also contributes to the inner tapetum.