Reproduction is one of the attributes of living things.

Sexual reproduction includes gametogenesis and fertilization. External fertilization occurs in lower plants like algae but in higher plants internal fertilization takes place. A flower is a modified shoot meant for reproduction. Stamen is the male reproductive part and produces pollen grains. The development of microspore is called microsporogenesis. The microspore mother cell undergoes meiotic division to produce four haploid microspores. In majority of Angiosperms the anther is dithecous and are tetrasporangiate. It possesses epidermis, endothecium, middle layers and tapetum. The hygroscopic nature of endothecial cell along with thin walled stomium helps in the dehiscence of anther. Tapetum nourishes the microspores and also contributes to the wall materials of the pollen grain. Pollen grain is derived from the microspore and possesses thin inner intine and thick outer exine. Sporopollenin is present in exine and is resistant to physiological and biological decomposition. Microspore is the first cell of male gametophyte.

The nucleus of the microspore divides to form a vegetative nucleus and a generative nucleus. The generative nucleus divides to form two male nuclei. Gynoecium is the female reproductive part of a flower and it represents one or more pistils. The ovary bears ovules which are attached to the placenta. There are six major types of ovules. The development of megaspore from megaspore mother cell is called megasporogenesis. A monosporic embryo sac (Polygonum type) possesses three antipodals in chalazal end, Three cells in the micropylar end constituting egg apparatus(1 egg and 2 Synergids) and two polar nucleus fused to form secondary nucleus. Thus, a 7 celled 8 nucleated Embryo sac is present.

The transfer of pollen grains to the stigma of a flower is called pollination. Self-pollination and cross-pollination are two types of pollination. Double fertilization and triple fusion are characteristic features of angiosperms. After fertilization the ovary transforms into a fruit and the ovule becomes a seed. Endosperm is triploid in angiosperms and is of three types – Nuclear, cellular, helobial. Reproduction which doesn’t involve meiosis and syngamy is called apomixis. Occurrence of more than one embryo in a seed is called polyembryony. Formation of fruit without the act of fertilization is called parthenocarpy. 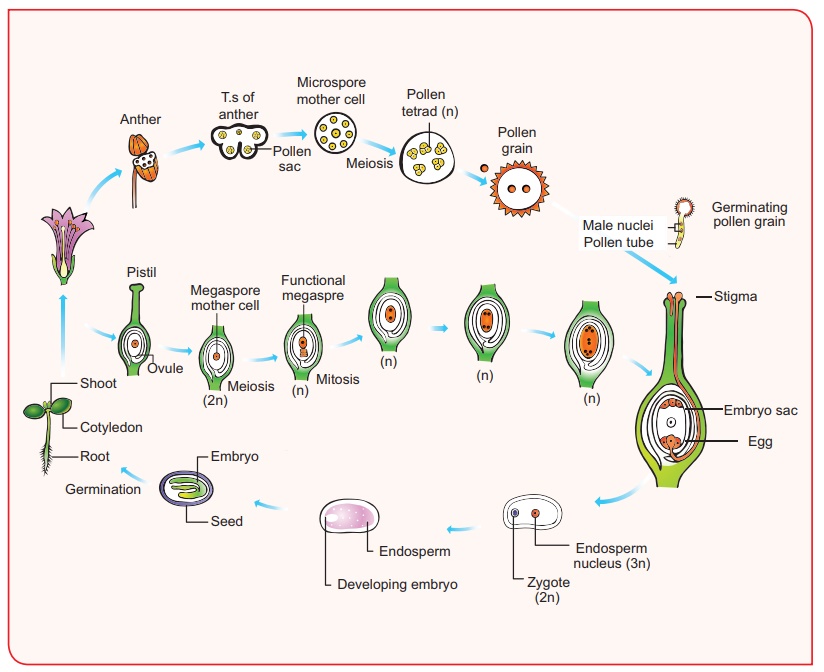