A. Conventional methods B. Modern Method

Apart from the above mentioned natural methods of vegetative reproduction, a number of methods are used in agriculture and horticulture to propagate plants from their parts. Such methods are said to be artificial propagation. Some of the artificial propagation methods have been used by man for a long time and are called conventional methods. Now-a-days, technology is being used for propagation to produce large number of plants in a short period of time. Such methods are said to be modern methods.

The common methods of conventional propagation are cutting, grafting and layering.

a. Cutting: It is the method of producing a new plant by cutting the plant parts such as root, stem and leaf from the parent plant. The cut part is placed in a suitable medium for growth. It produces root and grows into a new plant. Depending upon the part used it is called as root cutting (Malus), stem cutting (Hibiscus, Bougainvillea and Moringa) and leaf cutting (Begonia, Bryophyllum). Stem cutting is widely used for propagation.

b. Grafting: In this, parts of two different plants are joined so that they continue to grow as one plant. Of the two plants, the plant which is in contact with the soil is called stock and the plant used for grafting is called scion (Figure 1.2 a). Examples are Citrus, Mango and Apple. There are different types of grafting based on the method of uniting the scion and stock. They are bud grafting, approach grafting, tongue grafting, crown grafting and wedge grafting. 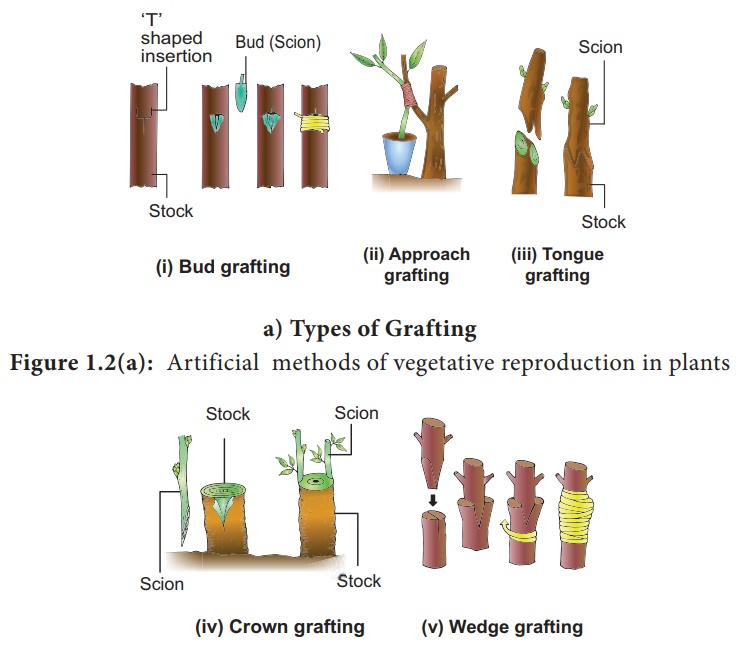 i. Bud grafting: A T- shaped incision is made in the stock and the bark is lifted. The scion bud with little wood is placed in the incision beneath the bark and properly bandaged with a tape.

ii. Approach grafting: In this method both the scion and stock remain rooted. The stock is grown in a pot and it is brought close to the scion. Both of them should have the same thickness. A small slice is cut from both and the cut surfaces are brought near and tied together and held by a tape. After 1-4 weeks the tip of the stock and base of the scion are cut off and detached and grown in a separate pot.

A scion and stock having the same thickness is cut obliquely and the scion is fit into the stock and bound with a tape.

When the stock is large in size scions are cut into wedge shape and are inserted on the slits or clefts of the stock and fixed in position using graft wax.

In this method a slit is made in the stock or the bark is cut. A twig of scion is inserted and tightly bound so that the cambium of the two is joined.

c. Layering: In this method, the stem of a parent plant is allowed to develop roots while still intact. When the root develops, the rooted part is cut and planted to grow as a new plant. Examples: Ixora and Jasminum. Mound layering and Air layering are few types of layering (Figure 1.2 b). 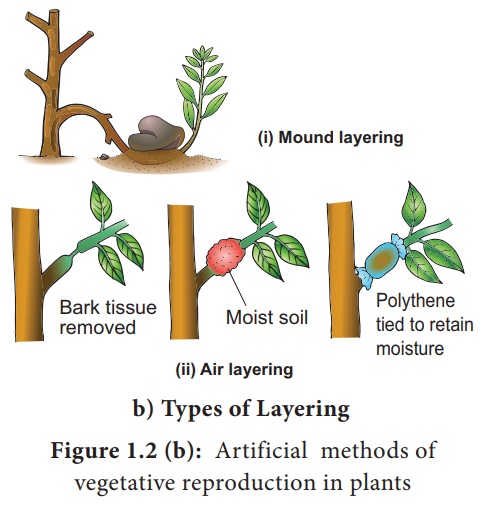 i. Mound layering: This method is applied for the plants having flexible branches. The lower branch with leaves is bent to the ground and part of the stem is buried in the soil and tip of the branch is exposed above the soil. After the roots emerge from the part of the stem buried in the soil, a cut is made in parent plant so that the buried part grow into a new plant.

ii. Air layering: In this method the stem is girdled at nodal region and hormones are applied to this region which promotes rooting. This portion is covered with damp or moist soil using a polythene sheet. Roots emerge in these branches after 2-4 months. Such branches are removed from the parent plant and grown in a separate pot or ground.

·         The plants produced are genetically uniform.

·         Some plants produce little or no seeds; in others, the seeds produced do not germinate. In such cases, plants can be produced in a short period by this method.

·         Some plants can be propagated more economically by vegetative propagation. Example: Solanum tuberosum.

·         Vegetative structures used for propagation are bulky and so they are difficult to handle and store.

Professor F.C. Steward(1932) of Cornell University showed that the mature phloem parenchyma cells removed from the carrot were placed in a suitable medium under controlled conditions, could be stimulated to start dividing again to produce a new carrot plant. These cells were described as totipotent. The genetic ability of a plant cell to produce the entire plant under suitable conditions is said to be totipotency. This characteristic feature of a cell is utilized in horticulture, forestry and industries to propagate plants. The growth of plant tissue in special culture medium under suitable controlled conditions is known as tissue culture.

The regeneration of a whole plant from single cell, tissue or small pieces of vegetative structures through tissue culture is called micropropagation. This is one of the modern methods used to propagate plants. The detailed steps involved in the micropropagation are given in Unit VIII.

·         Plants with desired characteristics can be multiplied rapidly in a short duration.

·         Tissue culture can be carried out in any season to produce plants.

·         Plants which do not produce viable seeds and seeds that are difficult to germinate can be propagated by tissue culture.

·         Disease free plants can be produced by meristem culture.

·         Cells can be genetically modified and transformed using tissue culture.

·         It is labour intensive and requires skilled workers.

·         Sterile condition must be maintained which adds to the cost.

·         Since the clones are genetically identical, the entire crop is susceptible to new diseases or changes in environmental conditions will wipe out the species.

·         Sometimes,callus undergoes genetical changes which are undesirable for commercial use.