According to a majority of Botanists, the transfer of pollen on the stigma of the same flower is called self-pollination or Autogamy.

According to a majority of Botanists, the transfer of pollen on the stigma of the same flower is called self-pollination or Autogamy. Self-pollination is possible only in those plants which bear bisexual flowers. In order to promote self- pollination the flowers of the plants have several adaptations or mechanisms. They are:

1. Cleistogamy: In cleistogamy (Greek Kleisto = closed. Gamos = marriage) flowers never open and expose the reproductive organs and thus the pollination is carried out within the closed flower. Commelina, Viola, Oxalis are some examples for cleistogamous flowers. In Commelina benghalensis, two types of flowers are produced-aerial and underground flowers. The aerial flowers are brightly coloured, chasmogamous and insect pollinated. The underground flowers are borne on the subterranean branches of the rhizome that are dull, cleistogamous and self pollinated and are not depended on pollinators for pollination.(Figure 1.11). 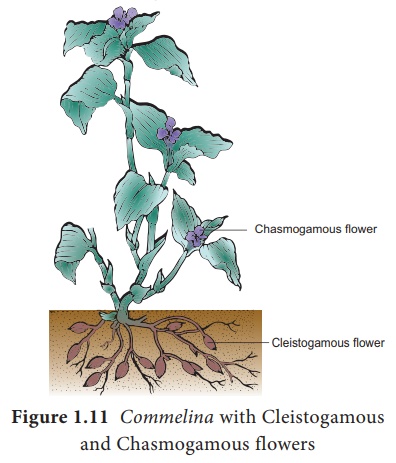 2.     Homogamy: When the stamens and stigma of a flower mature at the same time it is said to be homogamy. It favours self-pollination to occur. Example: Mirabilis jalapa, Catharanthus roseus

3. Incomplete dichogamy: In dichogamous flowers the stamen and stigma of a flower mature at different time. Sometimes , the time of maturation of these essential organs overlap so that it becomes favourable for self-pollination.