To describe the stages in embryo sac development and organization the simplest monosporic type of development is given below.

To describe the stages in embryo sac development and organization the simplest monosporic type of development is given below.

The functional megaspore is the first cell of the embryo sac or female gametophyte. The megaspore elongates along micropylar-chalazal axis. The nucleus undergoes a mitotic division. Wall formation does not follow the nuclear division. A large central vacuole now appears between the two daughter nuclei. The vacuole expands and pushes the nuclei towards the opposite poles of the embryo sac. Both the nuclei divide twice mitotically, forming four nuclei at each pole. 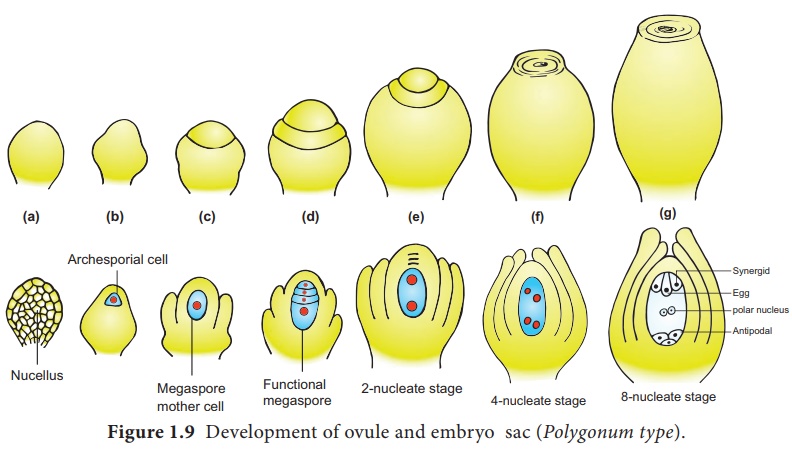 At this stage all the eight nuclei are present in a common cytoplasm (free nuclear division). After the last nuclear division the cell undergoes appreciable elongation , assuming a sac-like appearance. 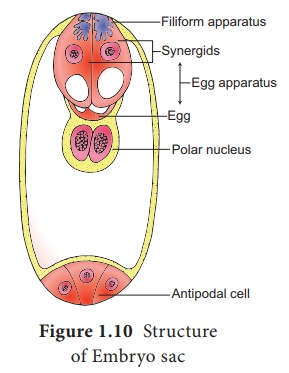 This is followed by cellular organization of the embryo sac. Of the four nuclei at the micropylar end of the embryo sac, three organize into an egg apparatus, the fourth one is left free in the cytoplasm of the central cell as the upper polar nucleus. Three nuclei of the chalazal end form three antipodal cells whereas the fourth one functions as the lower polar nucleus. Depending on the plant the 2 polar nuclei may remain free or may fuse to form a secondary nucleus (central cell). The egg apparatus is made up of a central egg cell and two synergids, one on each side of the egg cell. Synergids secrete chemotropic substances that help to attract the pollen tube. The special cellular thickening called filiform apparatus of synergids help in the absorption, conduction of nutrients from the nucellus to embryo sac. It also guides the pollen tube into the egg. Thus, a 7 celled with 8 nucleated embryo sac is formed. The structure of embryo sac is given in Figure 1.10.