It refers to the transfer of pollens on the stigma of another flower. The cross-pollination is of two types:

It refers to the transfer of pollens on the stigma of another flower. The cross-pollination is of two types:

i. Geitonogamy: When the pollen deposits on another flower of the same individual plant, it is said to be geitonogamy. It usually occurs in plants which show monoecious condition. It is functionally cross-pollination but is similar to autogamy because the pollen comes from same plant.

ii. Xenogamy: When the pollen (genetically different) deposits on another flower of a different plant of the same species , it is called as xenogamy.

When the flowers are unisexual only cross-pollination is possible. There are two types.

i. Monoecious: Male and female flowers on the same plant. Coconut, Bitter gourd. In plants like castor and maize, autogamy is prevented but geitonogamy takes place.

Flowers are bisexual and the special adaptation of the flowers prevents self-pollination.

i. Dichogamy: In bisexual flowers anthers and stigmas mature at different times, thus checking self-pollination. It is of two types.

a. Protandry: The stamens mature earlier than the stigmas of the flowers. Examples: Helianthus, Clerodendrum (Figure 1.12 a).

b. Protogyny: The stigmas mature earlier than the stamens of the flower. Examples: Scrophularia nodosa and Aristolochia bracteata (Figure 1.12 b). 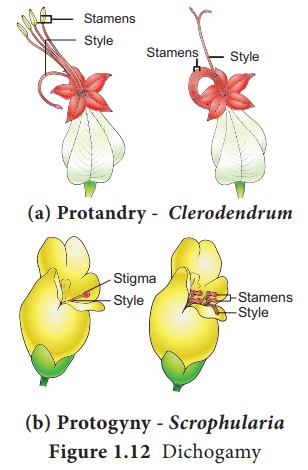 ii. Herkogamy: In bisexual flowers the essential organs, the stamens and stigmas, are arranged in such a way that self-pollination becomes impossible. For example in Gloriosa superba, the style is reflexed away from the stamens and in Hibiscus the stigmas project far above the stamens (Figure 1.13). 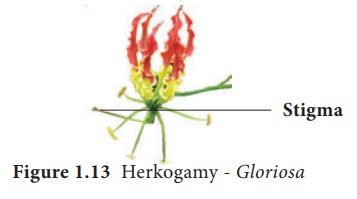 iii. Heterostyly: Some plants produce two or three different forms of flowers that are different in their length of stamens and style. Pollination will take place only between organs of the same length.(Figure 1.14)

Thrum-eyed or short style, small stigmatic papillae, long stamens and large pollen grains. Example: Primula (Figure 1.14a). The stigma of the Thrum-eyed flowers and the anther of the pin lie in same level to bring out pollination. Similarly the anther of Thrum-eyed and stigma of pin ones is found in same height. This helps in effective pollination. 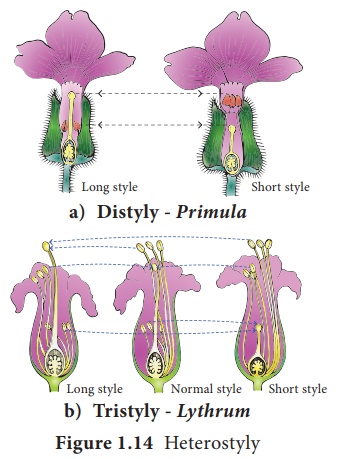 b.     Tristyly: The plant produces three kinds of flowers, with respect to the length of the style and stamens. Here,the pollen from flowers of one type can pollinate only the other two types but not their own type. Example : Lythrum (Figure 1.14b).

iv. Self sterility/ Self- incompatibility: In some plants, when the pollen grain of a flower reaches the stigma of the same, it is unable to germinate or prevented to germinate on its own stigma. Examples: Abutilon, Passiflora. It is a genetic mechanism.