Pollination is effected by many agents like wind, water, insects etc.

Pollination is effected by many agents like wind, water, insects etc. On the basis of the agents that bring about pollination, the mode of pollination is divided into abiotic and biotic. The latter type is used by majority of plants.

·         The flowers are produced in pendulous, catkin-like or spike inflorescence.

·         The axis of inflorescence elongates so that the flowers are brought well above the leaves.

·         The flowers are small, inconspicuous, colourless, not scented, do not secrete nectar.

·         The stamens are numerous, filaments are long, exerted and versatile.

·         Anthers produce enormous quantities of pollen grains compared to number of ovules available for pollination. They are minute, light and dry so that they can be carried to long distances by wind.

·         In some plants anthers burst violently and release the pollen into the air. Example: Urtica.

·         Plant produces flowers before the new leaves appear, so the pollen can be carried without hindrance of leaves. 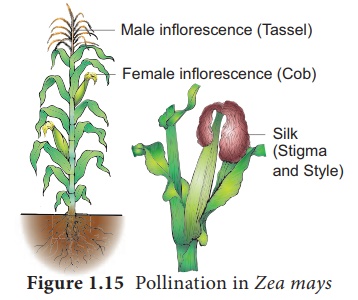 Pollination by water is called hydrophily and the flowers pollinated by water are said to be hydrophilous (Example: Vallisneria, Hydrilla). Though there are a number of aquatic plants, only in few plants pollination takes place by water. The floral envelop of hydrophilous plants are reduced or absent. In water plants like Eichhornia and water lilly pollination takes place through wind or by insects. There are two types of hydrophily, Epihydrophily and Hypohydrophily. In most of the hydrophilous flowers, the pollen grains possesses mucilage covering which protects them from wetting.

Pollination in Vallisneria spiralis: It is a dioecious, submerged and rooted hydrophyte. The female plant bears solitary flowers which rise to the surface of water level using a long coiled stalk at the time of pollination. A small cup shaped depression is formed around the female flower on the surface of the water. The male plant produces male flowers which get detached and float on the surface of the water. As soon as a male flower comes in closer to a female flower, it gets settled in the depression and contacts with the stigma thus bringing out pollination. Later the stalk of the female flower coils and brings back the flower from surface to under water where fruits are produced. (Figure 1.16). 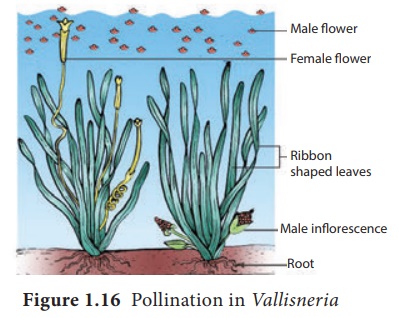 b. Hypohydrophily: Pollination occurs inside the water. Examples: Zostera marina and Ceratophyllum. Zostera marina is a submerged marine sea grass and pollination takes place under water. The pollen grains are long, needle like. They are shed under water. The specific gravity of the pollen is same as that of sea water, so that, the pollen floats freely at any depth. The stigma is very large and long. The pollen comes in contact with the stigma and gets coiled around the stigma thus effecting pollination.

Pollination by the agency of animals is called zoophily and flowers are said to be zoophilous. Animals that bring about pollination may be birds, bats, snails and insects. Of these, insects are well adapted to bring pollination. Larger animals like primates (lemurs), arboreal rodents, reptiles (gecko lizard and garden lizard) have also been reported as pollinators.

A. Ornithophily: Pollination by birds is called Ornithophily. Some common plants that are pollinated by birds are Erythrina, Bombax, Syzygium, Bignonia, Sterlitzia etc., Humming birds, sun birds, and honey eaters are some of the birds which regularly visit flowers and bring about pollination.

The ornithophilous flowers have the following characteristic features:

·         The flowers are brightly coloured, red, scarlet, pink, orange, blue and yellow which attracts the birds.

·         The flowers are scentless and produce nectar in large quantities. Pollen and nectar form the floral rewards for the birds visiting the flowers.

·         The floral parts are tough and leathery to withstand the powerful impact of the visitors. 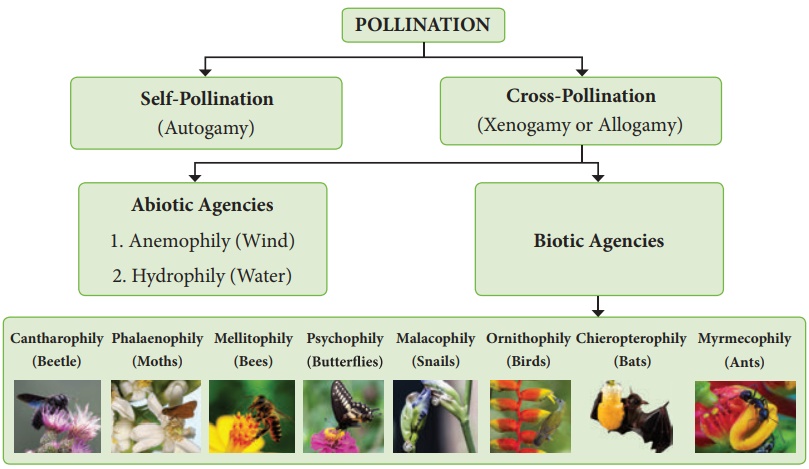 Pollination in Adansonia digitata: In this plant, the ball of stamens and the stigma project beyond the floral envelops. The bat holds the flower by clasping the stamen ball to its breast. While taking nectar its breast becomes laden with numerous pollen grains, some of which get deposited on the stigma of the flower when it visits next.

C. Malacophily: Pollination by slugs and snails is called malacophily. Some plants of Araceae are pollinated by snails. Water snails crawling among Lemna pollinate them.

The characteristic features of entomophilous­ flowers are as follows:

·         Flowers are generally large or if small they are aggregated in dense inflorescence.

·         Flowers in which there is no secretion of nectar, the pollen is either consumed as food or used in building up of its hive by the honeybees. Pollen and nectar are the floral rewards for the visitors.

·         In some flowers juicy cells are present which are pierced and the contents are sucked by the insects.

The flower of Salvia is adapted for Bee pollination. The flower is protandrous and the corolla is bilabiate with 2 stamens. A lever mechanism helps in pollination. Each anther has an upper fertile lobe and lower sterile lobe which is separated by a long connective which helps the anthers to swing freely. When a bee visits a flower, it sits on the lower lip which acts as a platform. It enters the flower to suck the nectar by pushing its head into the corolla. During the entry of the bee into the flower the body strikes against the sterile end of the connective. This makes the fertile part of the stamen to descend and strike at the back of the bee. The pollen gets deposited on the back of the bee. When it visits another flower, the pollen gets rubbed against the stigma and completes the act of pollination in Salvia (Figure 1.17a). Some of the other interesting pollination mechanisms found in plants are a) Trap mechanism (Aristolochia);Pit fall mechanism (Arum);Clip or translator mechanism (Asclepiadaceae) and Piston mechanism (Papilionaceae). 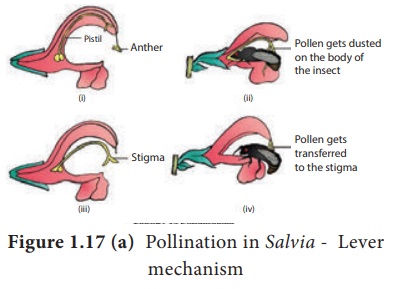 This mechanism is found in members of Asclepiadaceae( Apocynaceae as per APG system of classification). The flowers are bisexual with 5 stamens forming gynostegium(union of stigma with the androecium). The stigma is large and 5 – angled and is receptive on the underside. Each stamen at its back possesses a brightly coloured hood like outgrowth enclosing horn shaped nectar. The pollen in each anther lobe of a stamen unites into a mass, forming a pollinium. Pollinia are attached to a clamp or clip like sticky structure called corpusculum. The filamentous or thread like part arising from each pollinium is called retinaculum. The whole structure looks like inverted letter ‘Y’ and is called translator. When the insect visits the flower for nectar, the translator gets attached to the proboscis or leg of the visitor. During the visit to the next flower the pollinia come in contact with the receptive stigma carrying out pollination. 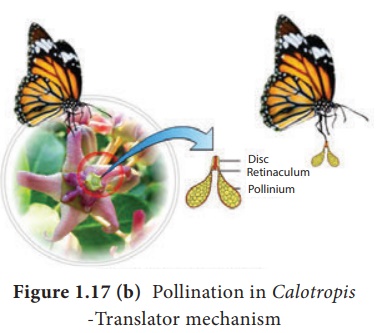 A special mechanism to accomplish pollination called trap mechanism is found in Aristolochia. The flowers are axillary and perianth is tubular with a hood at the top. The basal region is swollen and possesses gynostegium. The gynostegium has six anthers. 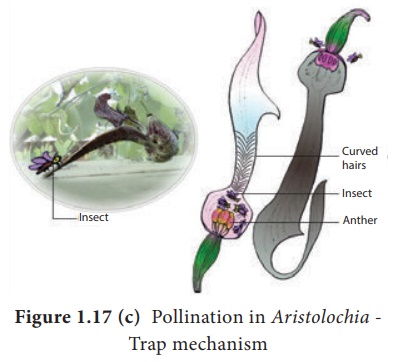 The inner wall of tubular middle part of the perianth is slippery and lined with stiff hairs which are pointed downwards. The young flowers are erect. During this stage small flies enter and could not escape because they are trapped by the hairs. As soon as the anthers of the flower ripe, the hairs wither and flower bents down. The flies escape with pollen and enter another flower where it dusts pollen on the stigma bringing out pollination.

·         When the members of the species are uncommon and are separated by large distances, the plant has to depend on self-pollination.

·         If all the chances of cross-pollination fails, self-pollination will take place and prevent the extinction of the species.

·         Chances of producing new species and varieties are meager.

·         It always results in bringing out much healthier offsprings.

·         The adaptability of the plants to their environment is better.

·         Depend on external agencies for the pollination and the process is uncertain.

·         Various devices have to be adopted to attract pollinating agents.

·         Pollination is a pre-requisite for the process of fertilisation. Fertilisation helps in the formation of fruits and seeds.

·         It brings the male and female gametes closer for the process of fertilisation.

·         Cross-pollination introduces variations in plants due to the mixing up of different genes. These variations help the plants to adapt to the environment and results in speciation.