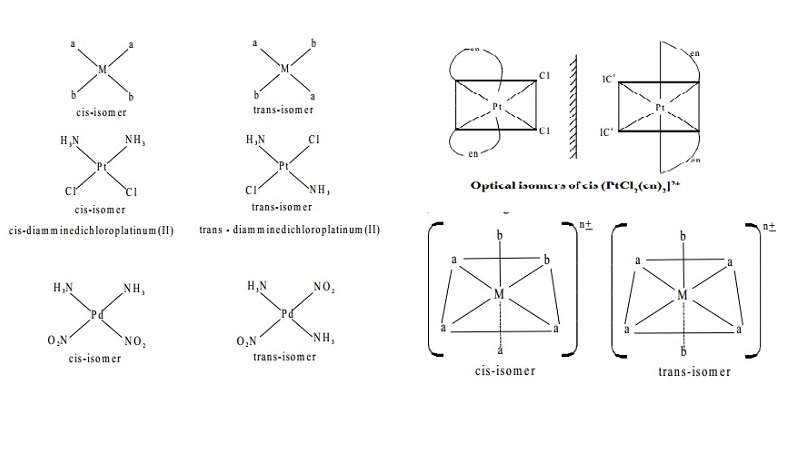 Compounds having the same chemical formula but different physical and chemical properties due to the different structural arrangements are called isomers. This phenomenon is known as isomerism.

(A) structural isomerism and (B) stereoisomerism (space isomerism). Each of these is further classified as shown below.

An example of this type of isomerism is furnished by the red-violet,

The best known examples of this type of isomerism occurs for chromium chloride "CrCl3.6H2O" which may contain 4, 5, (or) 6 coordinated water

These isomers have very different chemical properties and on reaction with AgNO3 to test for Cl- ions, would find 1,2, and 3 Cl- ions in solution respectively.

Linkage isomerism occurs with ambidentate ligands. These ligands are capable of coordinating in more than one way. The best known cases involve the monodentate ligands SCN-/NCS- and NO2-/ONO-

Ligand isomerism arises from the presence of ligands which can adopt different isomeric forms. An example is provided by diaminopropane, which may have the amine groups in the terminal (1,3-) positions or in the 1,2-positions.

a)    Geometrical (or) cis-trans isomerism

Geometric isomers are possible for both square planar and octahedral

complexes, but not tetrahedral. In a cis-isomer two identical (or) similar groups are adjacent to each other whereas in a trans-isomer they are diametrically opposite to each other.

Square planar complexes of the type [Ma2b2]n+ where a and b are monodentate ligands, exist as cis and trans-isomers as shown below. Example of this type of complexes are [Pt (NH3)2 Cl2] and [Pd(NH3)2 (NO2)2]. The cis- trans isomers of these compounds are represented as 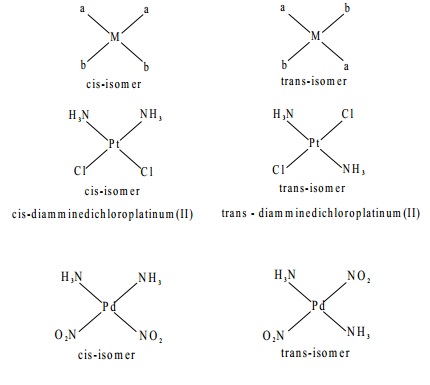 In the octahedral complex, the different coordination positions are numbered as shown below 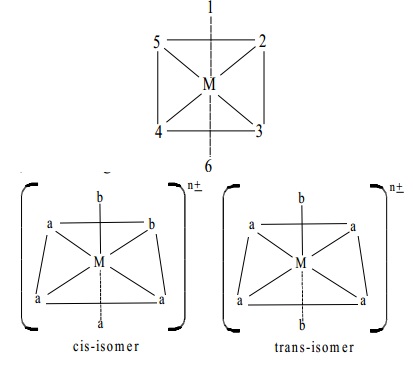 Along the twelve edges of the octahedron, there are twelve cis positions.

The octahedral complex of the type, [Ma3b3]n±, where a and b are monodentate ligands also exist as geometrical isomers, For example, [Rh(py)3 Cl3] exist as cis-(1,2,3 trichlorocomplex) and trans-(1,2,6-trichloro complex) isomers as represented below 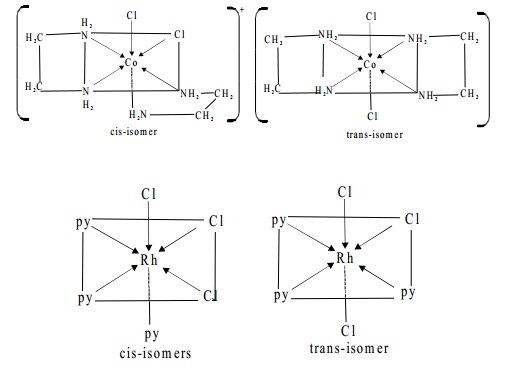 This is a phenomenon in which certain organic or inorganic compounds have the property of rotating plane polarised light. The compounds which exhibit this property are called optical isomers. The optical isomers of a compound have identical physical and chemical properties. The only distinguishing property is that the isomers rotate the plane of polarised light either to the left or right. In a coordination compound of type [PtCl2(en)2]12+, two geometrical isomers are

possible. They are cis and trans. Among these two isomers, cis isomer shows optical activity because the whole molecule is asymmetric. 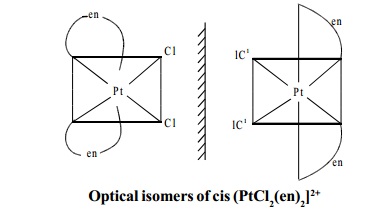