In order to formulate the laws of 1 Torr = 1 mm of Hg thermodynamics it becomes necessary to know the properties and nature of work (w) heat (q) and energy (u).

In order to formulate the laws of

thermodynamics it becomes necessary to know the properties and nature of work (w) heat (q) and energy (u).

In thermodynamics work is generally defined as the force (F) multiplied by the distance of displacement(s). That is,

Several aspects should be considered in the definition of work which are listed below:

1.    work appears only at the boundary of the system.

2.    work appears during the change in the state of the system.

3.    work brings in a permanent effect in the surroundings.

5.    work is a path function and it is not a state function.

This work is said to be done when a body is raised to a certain height against the gravitational field. If a body of mass `m' is raised through a height `h' against acceleration due to gravity `g', then the gravitational work carried out is `mgh'. In this expression, force is `mg' and the distance is `h'.

This type of work is said to be done when a charged body moves from one potential region to another. The electrical work is Q .V. if V is the potential difference causing the quantity of electricity 'Q' during its movement

This type of work is associated with changes in volume of a system when an external pressure is applied or lowered. This pressure-volume work is also referred to as the mechanical work.

Like work, heat (q) is regarded in thermodynamics as energy in transit across the boundary separating a system from its surroundings. Heat changes result in temperature differences between system and surroundings. Heat cannot be converted into work completely without producing permanent change either in the system or in the surroundings. Some of the characteristics of heat (q) are:

heat is an algebraic quantity.

heat is a path function and is not a state function.

heat changes are generally considered as temperature changes of the system. 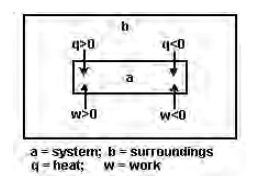 when, (i) heat is absorbed by the system (or) heat is lost by surroundings to the system: +q

Energy is easily, defined as the capacity to do work. Whenever there is a change in the state of matter of a system, then there is a change in energy ű8  of the system. For example energy changes are involved in processes like melting, fusion, sublimation, vapourisation etc. of the matter in a system. Energy (U) exists in many forms. Kinetic energy (K.E.) arises due to motion of a body and potential energy (P.E.) arises due to its position in space.

In chemical systems, there are two types of energy available. The energies acquired by the system like electrical, magnetic, gravitational etc. and termed as external energies of the system. The internal energy is generally referred to as the energy (U) of a thermodynamic system which is considered to be made up of mainly by P.E. and K.E.

Characteristics of energy (U) are:

1.    U is a state function. Its value depend on the initial and final states of the system.

2.    U is an extensive property. Its magnitude depend on the quantity of material in the system.

In S.I. system the unit of energy is Joules `J' or kJ.