The Biggest Biological Distinction-Prokaryotes and Eukaryotes

What is the difference between a prokaryote and a eukaryote?

The Biggest Biological Distinction-Prokaryotes and Eukaryotes

All cells contain DNA. The total DNA of a cell is called thegenome.Individualunits of heredity, controlling individual traits by coding for a functional protein or RNA, are genes.

The earliest cells that evolved must have been very simple, having the minimum apparatus necessary for life processes. The types of organisms living today that probably most resemble the earliest cells are the prokaryotes. This word, of Greek derivation (karyon, “kernel, nut”), literally means “before the nucleus.” Prokaryotes include bacteria and cyanobacteria. (Cyanobacteria were formerly called blue-green algae; as the newer name indicates, they are more closely related to bacteria.) Prokaryotes are single-celled organisms, but groups of them can exist in association, forming colonies with some differentiation of cellular functions.

What is the difference between a prokaryote and a eukaryote?

The word eukaryote means “true nucleus.” Eukaryotes are more complex organ-isms and can be multicellular or single-celled. A well-defined nucleus, set off from the rest of the cell by a membrane, is one of the chief features distinguish-ing a eukaryote from a prokaryote. A growing body of fossil evidence indicates that eukaryotes evolved from prokaryotes about 1.5 billion (1.5 × 109) years ago, about 2 billion years after life first appeared on Earth. Examples of single-celled eukaryotes include yeasts and Paramecium (an organism frequently discussed in beginning biology courses); all multicellular organisms (e.g., animals and plants) are eukaryotes. As might be expected, eukaryotic cells are more complex and usually much larger than prokaryotic cells. The diameter of a typical prokaryotic cell is on the order of 1 to 3 µm (1 × 10–6 to 3 × 10–6 m), whereas that of a typical eukaryotic cell is about 10 to 100 µm. The distinction between prokaryotes and eukaryotes is so basic that it is now a key point in the classification of living organ-isms; it is far more important than the distinction between plants and animals.

Organelles have specific functions. A typical eukaryotic cell has a nucleus with a nuclear membrane. Mitochondria (respiratory organelles) and an inter-nal membrane system known as the endoplasmic reticulum are also common to all eukaryotic cells. Energy-yielding oxidation reactions take place in eukaryotic mitochondria. In prokaryotes, similar reactions occur on the plasma mem-brane. Ribosomes (particles consisting of RNA and protein), which are the sites of protein synthesis in all living organisms, are frequently bound to the endo-plasmic reticulum in eukaryotes. In prokaryotes, ribosomes are found free in the cytosol. A distinction can be made between the cytoplasm and the cytosol. Cytoplasm refers to the portion of the cell outside the nucleus, and the cytosol isthe aqueous portion of the cell that lies outside the membrane-bounded organ-elles. Chloroplasts, organelles in which photosynthesis takes place, are found in plant cells and green algae. In prokaryotes that are capable of photosynthesis, the reactions take place in layers called chromatophores, which are extensions of the plasma membrane, rather than in chloroplasts.

Table 1.3 summarizes the basic differences between prokaryotic and eukaryotic cells. 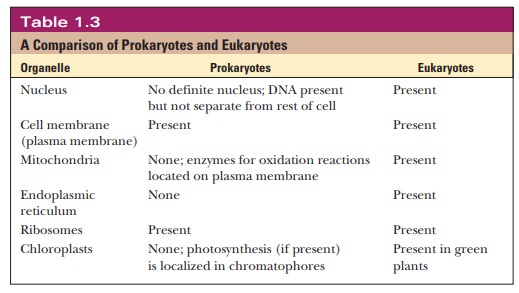 All cells contain DNA and are separated from their environment by a cell membrane. Prokaryotic cells do not have significant internal membranes, but the larger cells of eukaryotes have an extensive membrane system. The internal membranes mark off the organelles, portions of the cell with a specific function.