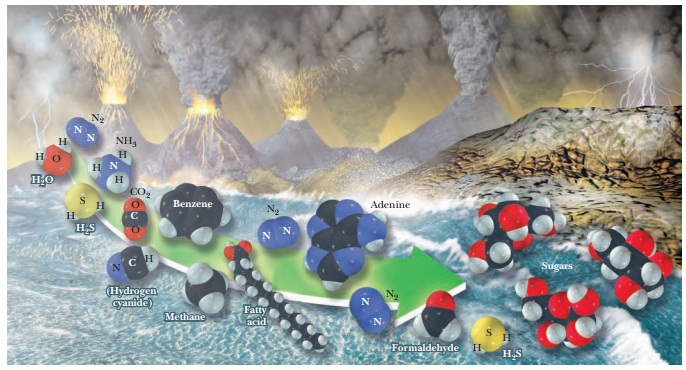 Experiments have been performed in which the simple compounds of the early atmosphere were allowed to react under the varied sets of conditions that might have been present on the early Earth.

Experiments have been performed in which the simple compounds of the early atmosphere were allowed to react under the varied sets of conditions that might have been present on the early Earth. The results of such experiments indicate that these simple compounds react abiotically or, as the word indicates (a, “not,” and bios, “life”), in the absence of life, to give rise to biologically important compounds such as the components of proteins and nucleic acids. Of historic interest is the well-known Miller–Urey experiment, shown schemati-cally in Figure 1.4. In each trial, an electric discharge, simulating lightning, is passed through a closed system that contains H2, CH4, and NH3, in addition to H2O. 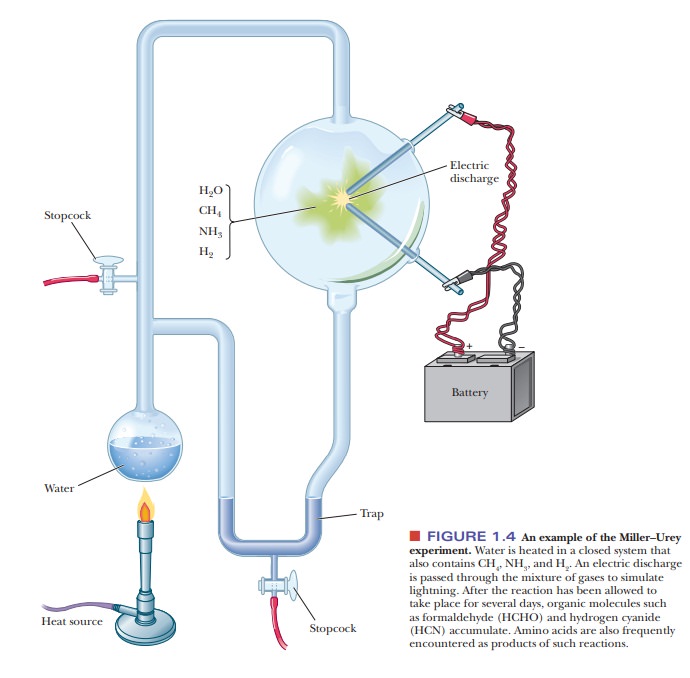 Simple organic molecules, such as formaldehyde (HCHO) and hydrogen cyanide (HCN), are typical products of such reactions, as are amino acids, the building blocks of proteins. According to one theory, reactions such as these took place in the Earth’s early oceans; other researchers postulate that such reactions occurred on the surfaces of clay particles that were present on the early Earth.

It is certainly true that mineral substances similar to clay can serve as catalysts in many types of reactions. Both theories have their proponents, and more research is needed to answer the many questions that remain.

Living cells today are assemblages that include very large molecules, such as proteins, nucleic acids, and polysaccharides. These molecules are larger by many powers of ten than the smaller molecules from which they are built. Hundreds or thousands of these smaller molecules, or monomers, can be linked to produce macromolecules, which are also called polymers. The versatility of carbon is important here. Carbon is tetravalent and able to form bonds with itself and with many other elements, giving rise to different kinds of monomers, such as amino acids, nucleotides, and monosaccharides (sugar monomers).

The several types of amino acids and nucleotides can easily be distin-guished from one another. When amino acids form polymers, with the loss of water accompanying this spontaneous process, the sequence of amino acids determines the properties of the protein formed. Likewise, the genetic code lies in the sequence of monomeric nucleotides that polymerize to form nucleic acids, the molecules of heredity (Figure 1.5). In polysaccharides, however, the order of monomers rarely has an important effect on the properties of the polymer, nor does the order of the monomers carry any genetic information. (Other aspects of the linkage between monomers are important in polysaccha-rides, as we shall see when we discuss carbohydrates). Notice that all the building blocks have a “head” and a “tail,” giving a sense of direction even at the monomer level (Figure 1.6). 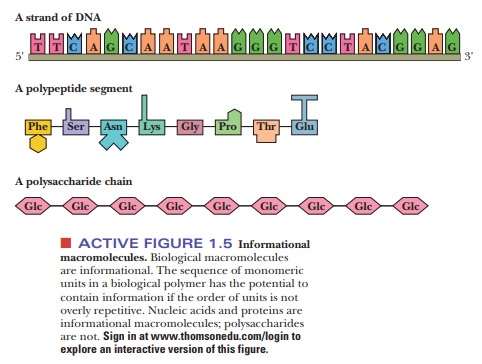 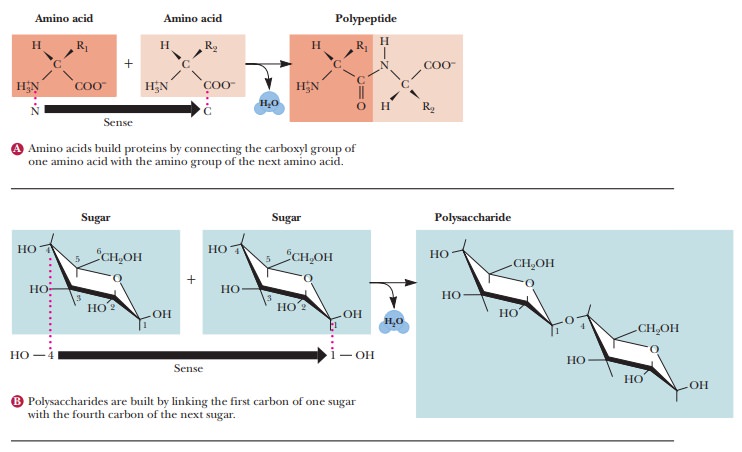 The effect of monomer sequence on the properties of polymers can be illustrated by another example. Proteins of the class called enzymes display catalytic activity, which means that they increase the rates of chemical reac-tions compared with uncatalyzed reactions. In the context of the origin of life, catalytic molecules can facilitate the production of large numbers of complex molecules, allowing for the accumulation of such molecules. When a large group of related molecules accumulates, a complex system arises with some of the characteristics of living organisms. Such a system has a nonrandom organization, tends to reproduce itself, and competes with other systems for the simple organic molecules present in the environment. One of the most important functions of proteins is catalysis, and the catalytic effectiveness of a given enzyme depends on its amino acid sequence. The specific sequence of the amino acids present ultimately determines the properties of all types of proteins, including enzymes. If not for protein catalysis, the chemical reactions that take place in our bodies would be so slow as to be useless for life processes.

In present-day cells, the sequence of amino acids in proteins is determined by the sequence of nucleotides in nucleic acids. The process by which genetic information is translated into the amino acid sequence is very complex. DNA(deoxyribonucleic acid), one of the nucleic acids, serves as the coding mate-rial. The genetic code is the relationship between the nucleotide sequence in nucleic acids and the amino acid sequence in proteins. As a result of this rela-tionship, the information for the structure and function of all living things is passed from one generation to the next. The workings of the genetic code are no longer completely mysterious, but they are far from completely understood. Theories on the origins of life consider how a coding system might have devel-oped, and new insights in this area could shine some light on the present-day genetic code.

Study Material, Lecturing Notes, Assignment, Reference, Wiki description explanation, brief detail
Biochemistry: Biochemistry and the Organization of Cells : How were biomolecules likely to have formed on the early Earth? |