From time to time, one encounters the statement that the existence of living things violates the laws of thermodynamics, specifically the second law. A look at the laws will clarify whether life is thermodynamically possible, and further discussion of thermodynamics will increase our understanding of this impor-tant topic.

The two laws of thermodynamics can be related to the free energy by means of a well-known equation:

In this equation, G is the free energy, as before; H stands for the enthalpy, and S for the entropy. Discussions of the first law focus on the change in enthalpy, ∆H, which is the heat of a reaction at constant pressure. This quantity is relatively easy to measure. Enthalpy changes for many important reactions have been determined and are available in tables in textbooks of general chemistry. Discussions of the second law focus on changes in entropy, ∆S, a concept that is less easily described and measured than changes in enthalpy. Entropy changes are particularly important in biochemistry. 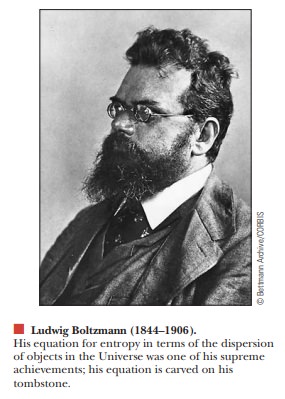 One of the most useful definitions of entropy arises from statistical consid-erations. From a statistical point of view, an increase in the entropy of a system (the substance or substances under consideration) represents an increase in the number of possible arrangements of objects, such as individual molecules. Books have a higher entropy when they are scattered around the reading room of a library than when they are in their proper places on the shelves. Scattered books are clearly in a more dispersed state than books on shelves. The natural tendency of the Universe is in the direction of increasing dispersion of energy, and living organisms put a lot of energy into maintaining order against this tendency. As all parents know, they can spend hours cleaning up a two-year-old’s room, but the child can undo it all in seconds. Similarly, cells use a lot of energy to fight the natural tendency toward dispersion into many different arrangements and to keep the cell structure intact.

Another statement of the second law is this: in any spontaneous process, the entropy of the Universe increases ( ∆Suniv> 0). This statement is general, and itapplies to any set of conditions. It is not confined to the special case of constanttemperature and pressure, as is the statement that the free energy decreases in a spontaneous process. Entropy changes are particularly important in determining theenergetics of protein folding.