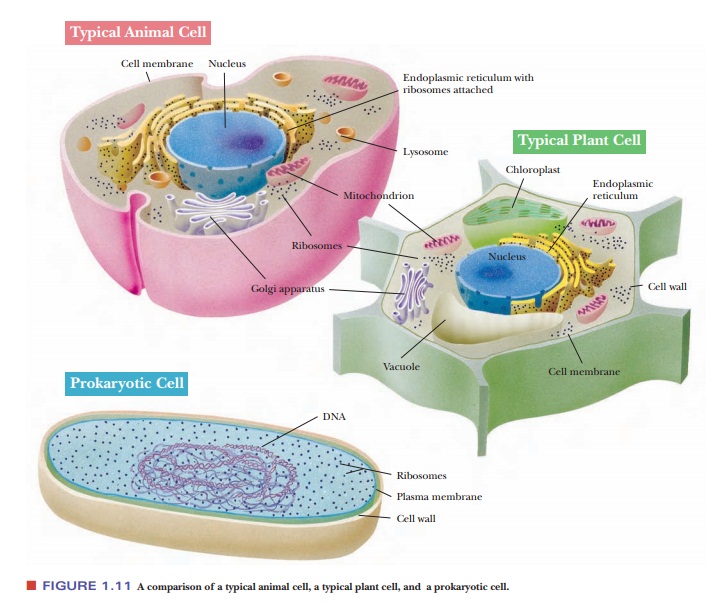 Multicellular plants and animals are eukaryotes, as are protista and fungi, but obvious differences exist among them.

Multicellular plants and animals are eukaryotes, as are protista and fungi, but obvious differences exist among them. These differences are reflected on the cellular level. One of the biggest differences between eukaryotes and prokary-otes is the presence of subcellular organelles.

Three of the most important organelles in eukaryotic cells are the nucleus, the mitochondrion, and the chloroplast. Each is separated from the rest of the cell by a double membrane. The nucleus contains most of the DNA of the cell and is the site of RNA synthesis. The mitochondria contain enzymes that cata-lyze important energy-yielding reactions.

Chloroplasts, which are found in green plants and green algae, are the sites of photosynthesis. Both mitochondria and chloroplasts contain DNA that differs from that found in the nucleus, and both carry out transcription and protein synthesis distinct from that directed by the nucleus.

Plant cells, like bacteria, have cell walls. A plant cell wall is mostly made up of the polysaccharide cellulose, giving the cell its shape and mechanical stabil-ity. Chloroplasts, the photosynthetic organelles, are found in green plants and algae. Animal cells have neither cell walls nor chloroplasts; the same is true of some protists. Figure 1.11 shows some of the important differences between typical plant cells, typical animal cells, and prokaryotes. 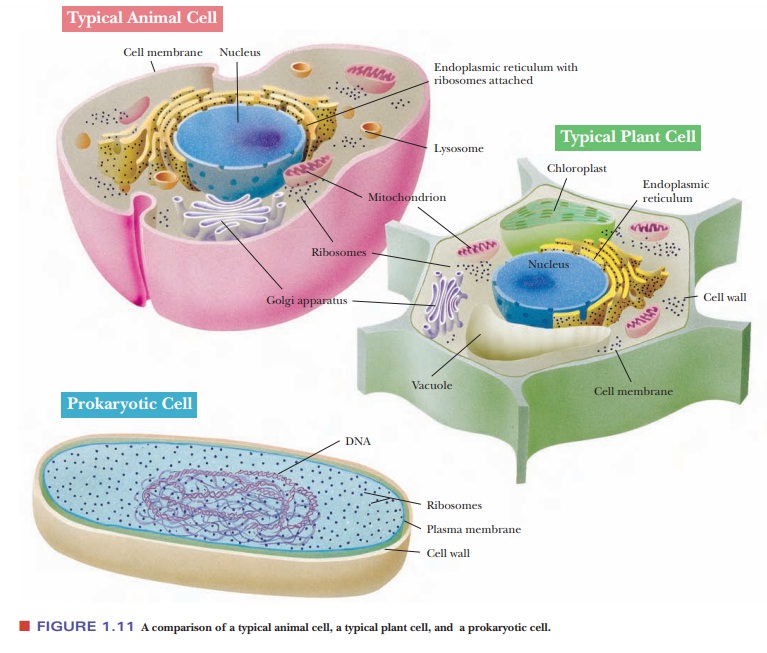 What are the most important organelles?

The nucleus is perhaps the most important eukaryotic organelle. A typical nucleus exhibits several important structural features (Figure 1.12). It is sur-rounded by a nuclear double membrane (usually called the nuclear envelope). One of its prominent features is the nucleolus, which is rich in RNA. 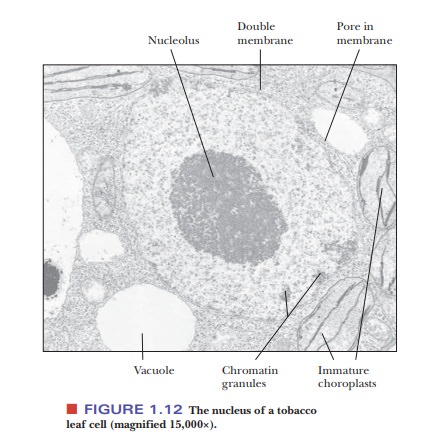 The RNA of a cell (with the exception of the small amount produced in such organelles as mitochondria and chloroplasts) is synthesized on a DNA template in the nucleolus for export to the cytoplasm through pores in the nuclear membrane. This RNA is ultimately destined for the ribosomes. Also visible in the nucleus, frequently near the nuclear membrane, is chromatin, an aggregate of DNA and protein. The main eukaryotic genome (its nuclear DNA) is duplicated before cell division takes place, as in prokaryotes. In eukaryotes, both copies of DNA, which are to be equally distributed between the daughter cells, are associated with protein. When a cell is about to divide, the loosely organized strands of chromatin become tightly coiled, and the resulting chromosomes can be seen under a microscope. The genes, responsible for the transmission of inherited traits, are part of the DNA found in each chromosome.

A second very important eukaryotic organelle is the mitochondrion, which, like the nucleus, has a double membrane (Figure 1.13). The outer membrane has a fairly smooth surface, but the inner membrane exhibits many folds called cristae. The space within the inner membrane is called the matrix. Oxidationprocesses that occur in mitochondria yield energy for the cell. Most of the enzymes responsible for these important reactions are associated with the inner mitochondrial membrane. Other enzymes needed for oxidation reactions, as well as DNA that differs from that found in the nucleus, are found in the internal mitochondrial matrix. Mitochondria also contain ribosomes similar to those found in bacteria. Mitochondria are approximately the size of many bac-teria, typically about 1 µm in diameter and 2 to 8 µm in length. In theory, they may have arisen from the absorption of aerobic bacteria by larger host cells. 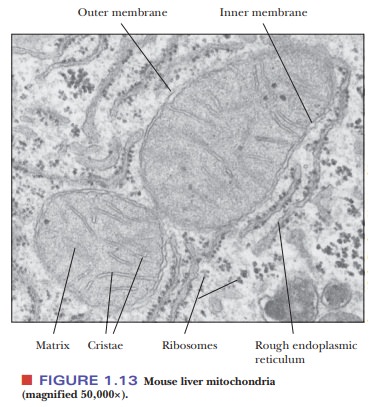 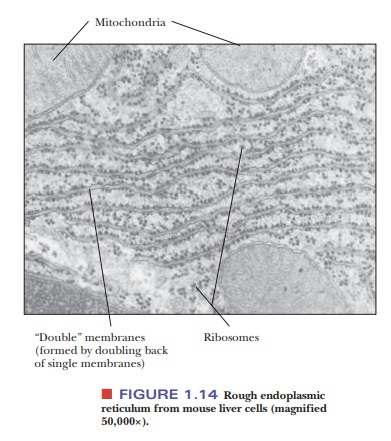 Chloroplasts are important organelles found only in green plants and green algae. Their structure includes membranes, and they are relatively large, typically up to 2 µm in diameter and 5 to 10 µm in length. The photo-synthetic apparatus is found in specialized structures called grana (singular granum), membranous bodies stacked within the chloroplast. Grana are easilyseen through an electron microscope (Figure 1.15). Chloroplasts, like mito-chondria, contain a characteristic DNA that is different from that found in the nucleus. Chloroplasts and mitochondria also contain ribosomes similar to those found in bacteria. 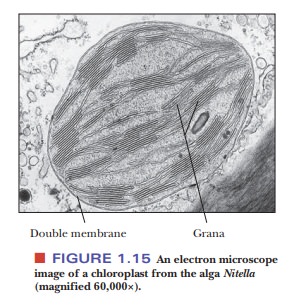 What are some other important components of cells?

Membranes are important in the structures of some less well-understood organ-elles. One, the Golgi apparatus, is separate from the endoplasmic reticulum but is frequently found close to the smooth endoplasmic reticulum. It is a series of membranous sacs (Figure 1.16). The Golgi apparatus is involved in secre-tion of proteins from the cell, but it also appears in cells in which the primary function is not protein secretion. In particular, it is the site in the cell in which sugars are linked to other cellular components, such as proteins. The function of this organelle is still a subject of research. 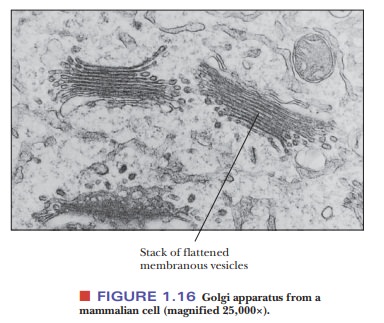 Other organelles in eukaryotes are similar to the Golgi apparatus in that they involve single, smooth membranes and have specialized functions. Lysosomes, for example, are membrane-enclosed sacs containing hydrolyticenzymes that could cause considerable damage to the cell if they were not physically separated from the lipids, proteins, or nucleic acids that they are able to attack. Inside the lysosome, these enzymes break down target molecules, usually from outside sources, as a first step in processing nutrients for the cell. Peroxisomes are similar to lysosomes; their principal characteristic is that theycontain enzymes involved in the metabolism of hydrogen peroxide (H2O2), which is toxic to the cell. The enzyme catalase, which occurs in peroxisomes, catalyzes the conversion of H2O2 to H2O and O2. Glyoxysomes are found in plant cells only. They contain the enzymes that catalyze the glyoxylate cycle, a pathway that converts some lipids to carbohydrate with glyoxylic acid as an intermediate.

The cytosol was long considered nothing more than a viscous liquid, but recent studies by electron microscopy have revealed that this part of the cell has some internal organization. The organelles are held in place by a lattice of fine strands that seem to consist mostly of protein. This cytoskeleton, or microtrabecu-lar lattice, is connected to all organelles (Figure 1.17). Many questions remainabout its function in cellular organization, but its importance in maintaining the infrastructure of the cell is not doubted. 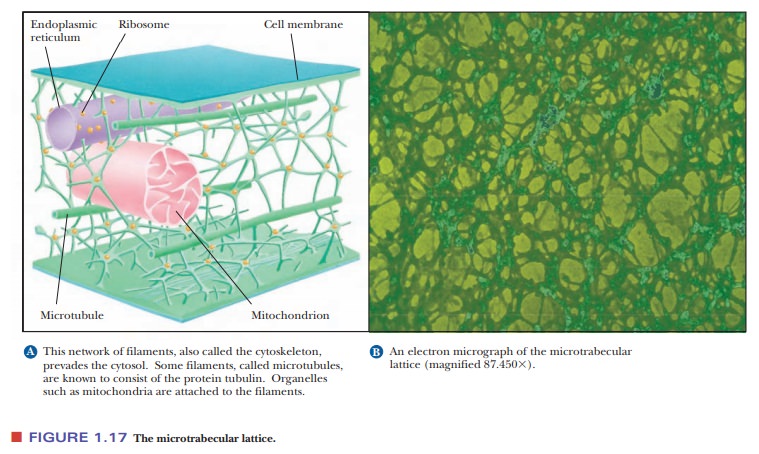 The cell membrane of eukaryotes separates the cell from the outside world. It consists of a double layer of lipids, with several types of proteins embedded in the lipid matrix. Some of the proteins transport specific substances across the membrane barrier. Transport can take place in both directions, with sub-stances useful to the cell being taken in and others being exported.

Plant cells (and algae), but not animal cells, have cell walls external to the plasma membrane. The cellulose that makes up plant cell walls is a major component of plant material; wood, cotton, linen, and most types of paper are mainly cellulose. Also present in plant cells are large central vacuoles, sacs in the cytoplasm surrounded by a single membrane. Although vacuoles some-times appear in animal cells, those in plants are more prominent. They tend to increase in number and size as the plant cell ages. An important function of vacuoles is to isolate waste substances that are toxic to the plant and are pro-duced in greater amounts than the plant can secrete to the environment.

These waste products may be unpalatable or even poisonous enough to discourage herbivores (plant-eating organisms) from ingesting them and may thus provide some protection for the plant.

Table 1.4 summarizes organelles and their functions. 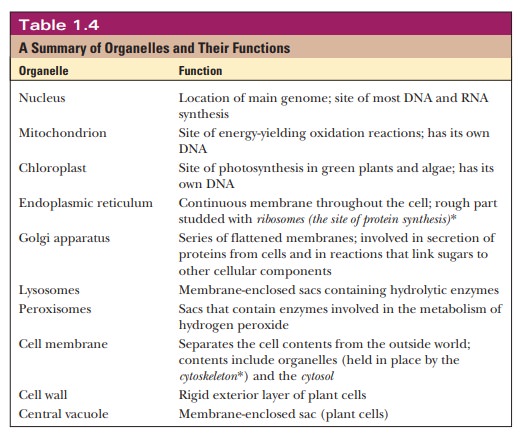 Three of the most important organelles in eukaryotic cells are the nucleus, the mitochondrion, and the chloroplast. Each is separated from the rest of the cell by a double membrane. The nucleus contains most of the DNA of the cell and is the site of RNA synthesis. The mitochon-dria contain enzymes that catalyze important energy-yielding reactions. Chloroplasts, which are found in green plants and green algae, are the sites of photosynthesis. Both mitochondria and chloroplasts contain DNA that differs from that found in the nucleus, and both carry out transcrip-tion and protein synthesis distinct from that directed by the nucleus.

Other organelles play specific roles. They include the Golgi apparatus, lyso-somes, and peroxisomes.